This past weekend I was a participant in the 30th Annual National Cowboy Symposium, held in the Lubbock Memorial Civic Center on Friday, Saturday, and Sunday, September 7-9. Beginning in the 1990s I provided programs sporadically, usually if a topical book - such as Historic Ranches of the Old West - had been released that year. Alvin Davis, the founding father of the Symposium, was kind enough to welcome me (and I was delighted that Alvin attended one of my presentations during this 30th anniversary year). After I became Texas State Historian six years ago, Monica Hightower, who succeeded Alvin following his retirement, has invited me each year, and she has provided excellent PR for the State Historian, resulting in large crowds during my presentations. It has been a privilege to represent the Lone Star State at the annual celebration of the cowboy culture which developed in Texas and in time made the cowboy the world's number one folk hero. 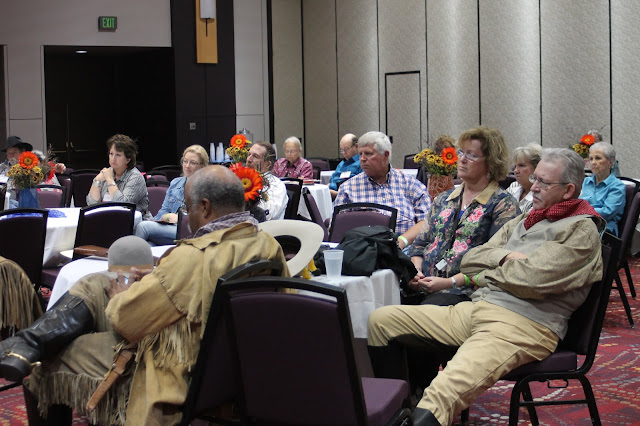 I was asked to present programs during one-hour time slots on Friday and Saturday afternoons on my recent book John Chisum, Frontier Cattle King. The Texan who built the West's greatest open range range proved to be a popular subject for the Symposium attendees. And at my Friday program, when I introduced Alvin Davis to the audience, they appreciatively gave him a rousing ovation. Also on Friday afternoon I served as emcee for an excellent Writer's Panel. During the past few years I have participated in this panel alongside veteran authors Karen Fitzjerrell of San Antonio and Lubbock's Nathan Dahllstrom, who created a series of youth novels on the adventures of Wilder Good. (Indeed, I stopped by his vendor table to purchase a signed copy of his latest release for a grandchild.) This year we added two fine writers to our panel. Jim Jones is an accomplished composer who also performed musical numbers at the Symposium. And our ranks were joined by John R. Erickson, who has written 75 books and more than 300 articles. John is acclaimed for his "Hank the Cowdog" series of books, audio books, and stage plays. I have read and re-read his autobiographical Panhandle Cowboy, but I visited his vendor's table to stock up on Hank the Cowdog books for my grandchildren.
More than 50 performers provided cowboy entertainment throughout Friday and Saturday. There were horse handling demonstrations in the indoor arena, and there was an outdoors horse parade. Also outdoors was an assemblage of chuck wagons, and on Saturday the National Championship Chuck Wagon Cook-Off was held. On Saturday afternoon Monica Hightower emceed an entertaining session on Chuck Wagon Cook stories and tips. And in the big arena area there was aisle after aisle of vendor's tables, featuring Western art, clothing, jewelry, books, Native American items, and historical displays. On Sunday morning the Symposium concluded with a Chuck Wagon Breakfast, followed by a Cowboy Church Service featuring music, poetry, prayer, and a devotional message.

While I was in the Panhandle for a few days, I made a flying trip to Amarillo to interview Mrs. Olive Virginia  Maynard, who is a granddaughter of the famous buffalo hunter and army scout, Billy Dixon, and his remarkable wife, Olive King Dixon. Although Billy died years before Virginia was born, her grandmother and namesake did not pass away until she was a teenager. I am preparing a book, Billy and Olive Dixon, The Plainsman and His Lady. Prior to the Cowboy Symposium I exchanged letters with Virginia, and we talked by telephone. She graciously invited me to her home, where we talked at length about her grandparents, as well as her mother and aunts and uncles. Virginia allowed me to examine scrapbooks and photos and other artifacts. My visit with Virginia was a highlight of my weekend in the Panhandle.