My daughter, Dr. Berri O'Neal Gormley, and her family - husband Drew and my three youngest grandchildren, Addie, Reagan, and Nolan - moved to Colleyville in 2015. Berri minored in history, an interest she has maintained throughout her life, and for the past year she has provided the technological expertise necessary to produce this blog. On previous visits to Colleyville, I asked Berri to show me historical sites and venerable buildings. This summer she went exploring, and when I visited in early July she offered to give me an historical tour of her community. 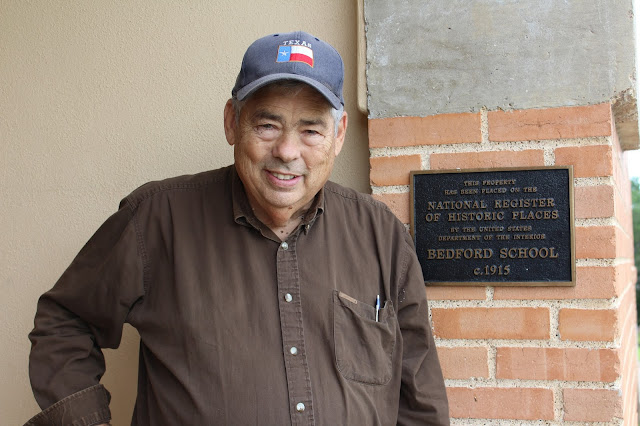 Berri explained to me that into the 1950s Colleyville was an unincorporated village. Today's Colleyville town site long was made up of farms and small rural communities. One of these communities was Bedford, and Berri first took me to the 1908 Bedford School. In the years before the Civil War, the first Bedford area school house was a log building. Soon after the war ended, a frame school was erected. When that school burned in the early 1880s, a citizen named Milton Moore donated land for a school campus. When that building also burned in 1893, an elementary school was erected nearby. In 1908 this structure was replaced by a two-story brick school. When Bedford consolidated with the Hurst-Euless district in 1958, the brick school continued to be used, with a large addition to the rear, until 1969. The old Bedford School has since been handsomely restored and stands impressively on the traditional school site.

Berri and I next visited the Bidault House, which was designed and built by Anthelm Bidault, a farmer and winemaker. The house was constructed of molded concrete blocks during the years 1905-1911. Bidault was noted for cultivating orchards, vineyards, and berry fields on his farm. During World War I French soldiers stationed at Camp Bowie in Fort Worth were entertained at the Bidault home. Two years after the war the Bidault family moved back to France, but their well-built residence is a tangible reminder of their stay in Texas. 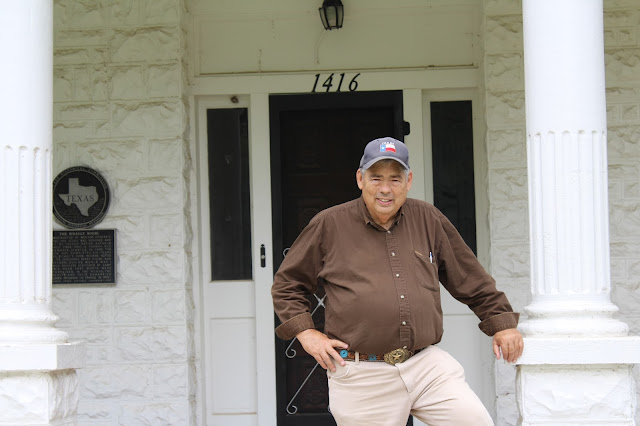 Our next stop was at the Webb House, built in 1914 by John R. Webb, a citizen of Bransford. His earlier home in Bransford had burned, but Webb erected a one-and-one-half story house on a T-floor plan, with a spacious front porch and side porches. Webb arrived at rural Bransford from Tennessee in 1897. Webb worked for the Cotton Belt Railroad for 44 years, and he also owned Bransford's last general store. Prominent in community affairs, he was active in the Woodmen of the World lodge, a trustee of the Pleasant Run School, the unofficial mayor of Bransford, and manager of the Grapevine Rabbit Twisters, a popular fiddle band. The Webb House was restored through community efforts in 2002, and fittingly a venerable caboose was placed nearby.
﻿ ﻿


Rural communities such as Bransford, Pleasant Run, Bedford, and others began to be settled in the 1850s. Dr. Howard Colley moved to Texas in 1880, settled in Bransford, and practiced medicine for the next 40 years. A community grew up near his home and around a store founded in 1914 which took on the name of the beloved country doctor, Coleysville and, later, Colleyville. There were two businesses and 25 people in Colleyville in 1936. Two decades later Colleyville was incorporated, and in 1958 a population of 100 was reported. Growth was slow but steady, and today the population exceeds 26,000. And there is enough interest in local history to preserve remnants of early village life in the vicinity.

Posted by Unknown at 8:17 PM No comments:

10th Anniversary of the WWHA

The Wild West History Association held its 10th Annual Roundup in Fort Worth on Wednesday through Saturday, July 12-15th. More than 150 members from across the nation gathered at the Radisson Fossil Creek Hotel in north Fort Worth. Before the WWHA was organized, men and women with an interest in Wild West History, especially the dramatic events of gunfighting were members of NOLA (National Association for Outlaw and Lawmen History) or WOLA (Western Association for Outlaw and Lawmen History), or the annual meetings sponsored by Wild West enthusiast Michael Hickey in Arizona. I was one of several gunfighting aficionados who participated in all three groups. Robert McCubbin of Santa Fe, a noted historic photograph collector, headed the movement to merge into one organization, “just as long as it doesn’t rhyme with ‘COLA,’” he urged.

It is fitting that the Wild West History Association celebrated its 10th anniversary in Texas, because the largest number of members are from Texas. As Texas State Historian I was asked to provide the opening address, on Wednesday evening. My topic was, "The Panther Roared – and So Did the Guns." The theme I explored – as I have in articles and books and even a Texas State Historical Association Webinar in 2016 – was that Texas was the gunfighter capital of the Wild West. There were more gunfights in Texas than in any other state or territory, more blood feuds were fought in Texas, more gunfighters were from Texas, and more gunfighters died in Texas. As far as “The Panther Roared,” I wanted to explain how Fort Worth came to be called “Panther City,” and I wanted to focus as much as possible on the gunfighters and shootouts of old Fort Worth, our host city. 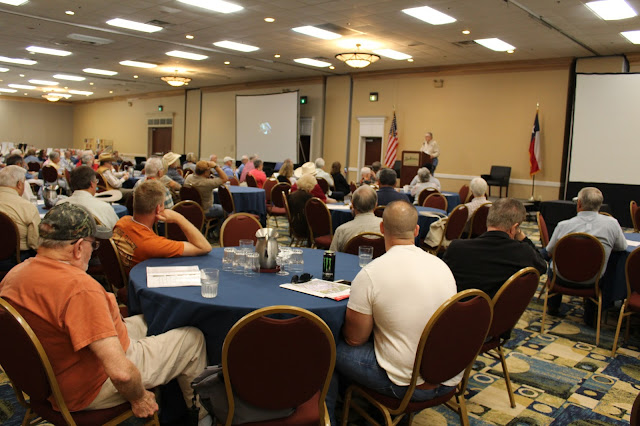 WWHA board members Roy Young and Kurt House worked as Co-Chairs of the Program Committee to provide us with an outstanding program. The opening speaker on Thursday morning was Dr. Richard Selcer, an authority on Fort Worth history who spoke on, “Law and Disorder – Texas Style.” Dr. Selcer was followed by Mike Cox, who is a member of the Texas Institute of Letters, the Editor of the WWHA Journal, and who has enjoyed a long association as a writer with the Texas Rangers, an iconic organization which was the subject of his program. Award-winning author Chuck Parsons spoke on the murderous Sutton-Taylor Feud. Chuck was followed by Margaret and Gary Kraisinger, who have performed meticulous field research on the historic cattle trails and who presented an excellent PowerPoint program on the 150th Anniversary of the Chisholm Trail. Indeed, that evening we celebrated the Chisholm Trail – which ran through our host city – with a striking 150th anniversary birthday cake.

The mid-day meal on Thursday was an Awards Luncheon. A Six-Shooter Award for Best Article of the Year was presented to nationally-known historian Paul Andrew Hutton. The WWHA Book of the Year Award went to John Boessenecker for his superb biography, Texas Ranger: The Epic Life of Frank Hamer. The programs after lunch were concluded by Bill Neal, who spoke on his recently released book: Death on the Lonely Llano Estacado, about the assassination of the attorney Jim Jarrott by Killin’ Jim Miller, whose home was in Fort Worth. 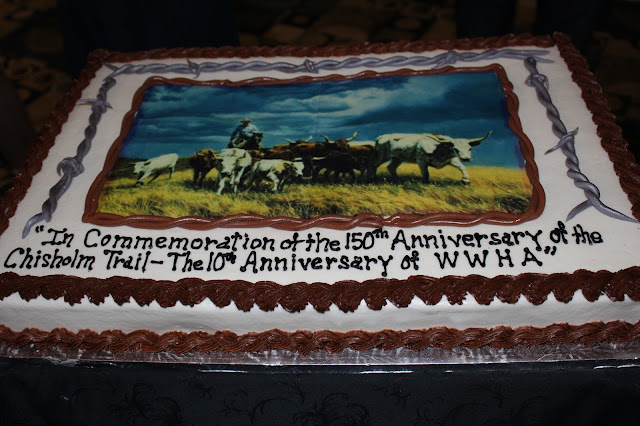 ﻿ Friday was field trip day, and three busses delivered WWHA visitors to the nearby Stockyards, to the Museum District, and to Oakwood Cemetery, final resting place of shootists Luke Short, Killin’ Jim Miller, and Jim Courtright, city marshal of Fort Worth (1876-79) and owner of a detective agency/protection racket. In one of the most famous gunfights in Western history, Short killed Courtright in 1887 in downtown Fort Worth. Cattle barons such as Burk Burnett and W.T. Waggoner also rest in Oakwood Cemetery, along with many other Fort Worth notables. On Friday evening the WWHA was entertained by a Cowboy Poets and Storytellers Session. 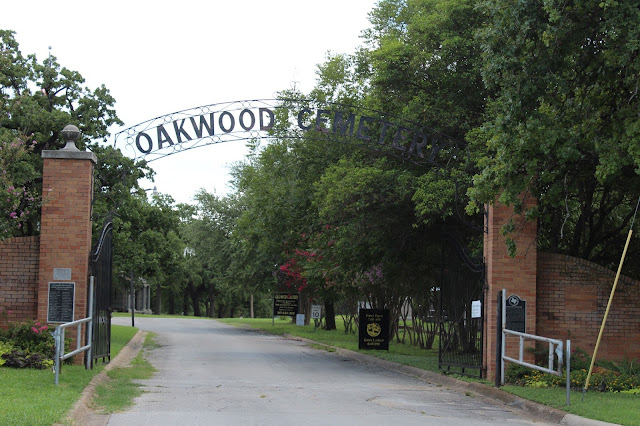 Our last day included Kurt House, “Ten Things You Didn’t Know about John Wesley Hardin,” Chuck Hornung and a program on the New Mexico Mounted Police, and a “Gunfighter's Session” with programs by WWHA President Jim Dunham and by the Texas State Historian. Saturday evening featured the Annual Boots and Spurs Banquet, with a program by Pulitzer Prize Finalist and New York Times Best-selling author S.G. Gwynne. Before we adjourned it was announced that we will meet in Springfield, Missouri, in 2018 and in Cheyenne, Wyoming, in 2019.

Posted by Unknown at 8:32 PM No comments:

On a recent trip to West Texas I stopped off to tour the Buffalo Gap Historic Village. Buffalo Gap, as the name suggests, is an opening in a line of rocky hills through which herds of buffalo moved. A small community grew up near the gap, and when Taylor County was organized in 1878 Buffalo Gap became the county seat. A two-story stone courthouse and jail was built in 1879. Two years later, when the first railroad came through the county to the north, Buffalo Gap was bypassed. The new town of Abilene, on the railroad, wrested the seat of county government from Buffalo Gap in an 1883 election. But the 1879 courthouse remained an impressive building, and beginning in 1956 other frontier structures were brought onto the site.
﻿﻿ 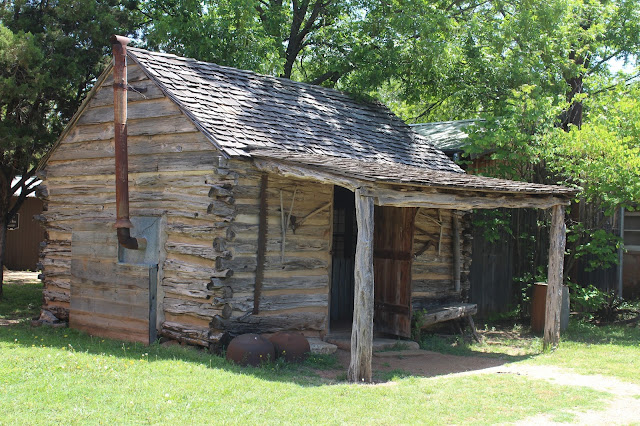 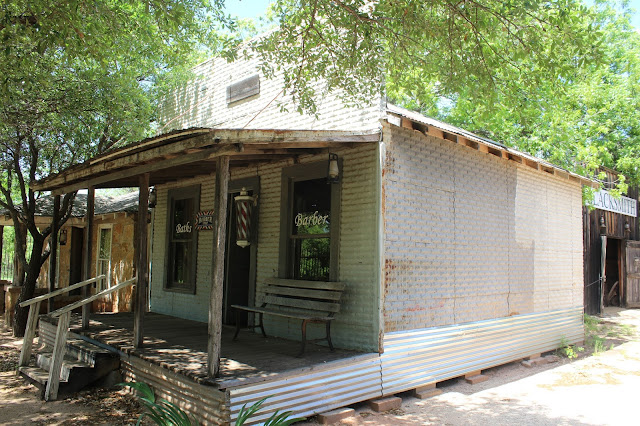 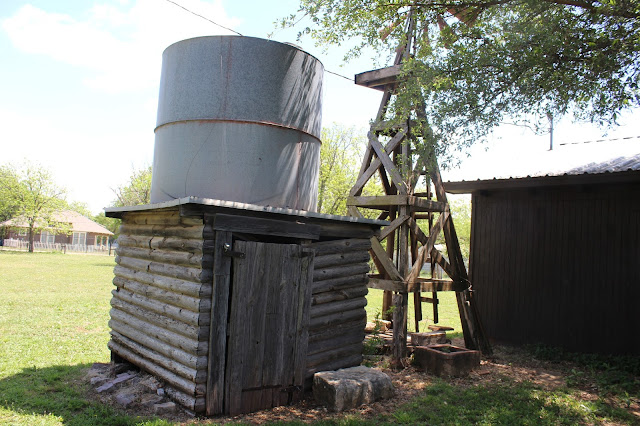 Today the Buffalo Gap Historic Village features the courthouse and jail, along with 15 other buildings. There is a pioneer residence, a log cabin, a blacksmith shop, a two-room school, a dentist office, a railroad depot, a barber shop, a store, a rustic chapel, and a livery barn with an excellent collection of horse-drawn vehicles. There are firearms and all manner of other artifacts displayed in these historic buildings, as well as a Western art collection. The tour starts at a fine visitor center and gift shop. 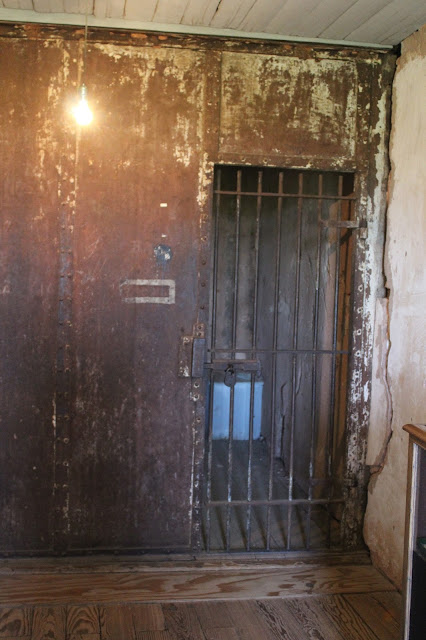 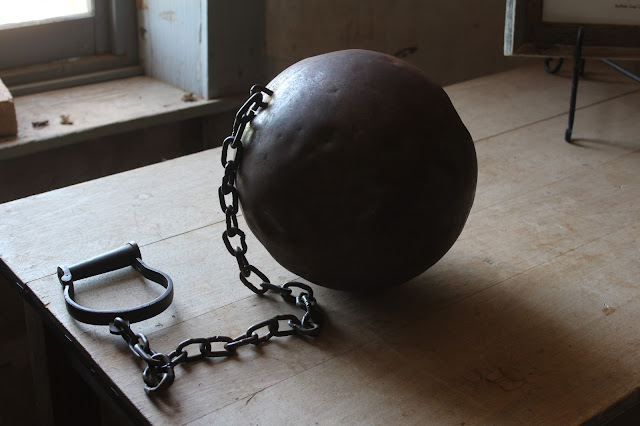 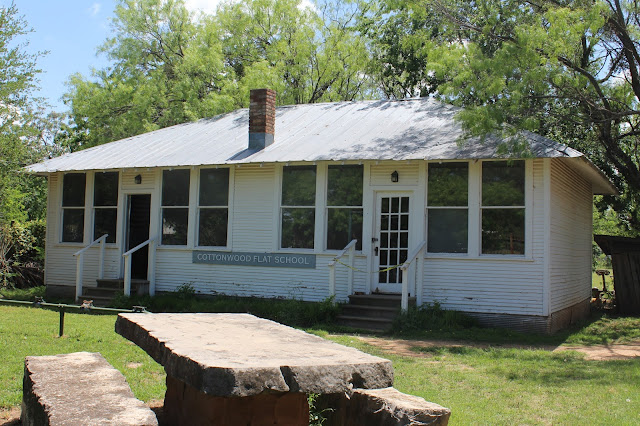 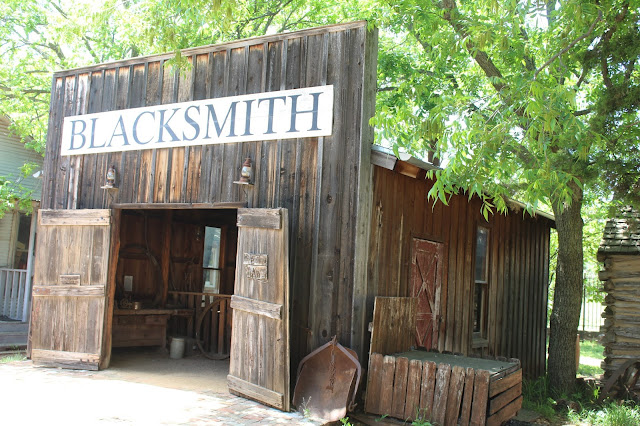 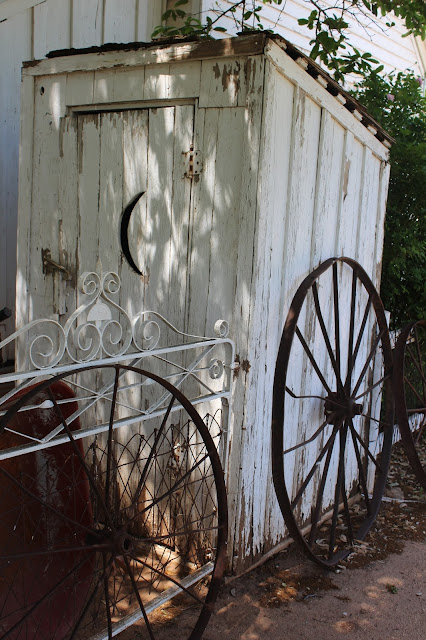 Years ago, every time I drove through Buffalo Gap I stopped for a tour. I stopped dropping in about two decades ago, but I realized that by now there probably were additional buildings at Buffalo Gap Historic Village, as well as new displays. Both expectations proved true, and I enjoyed a fine visit. 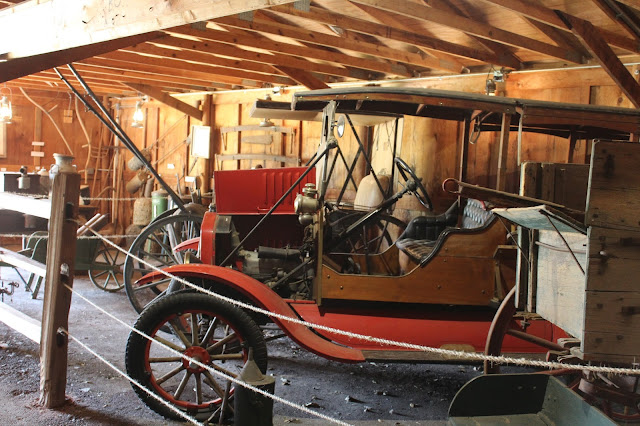 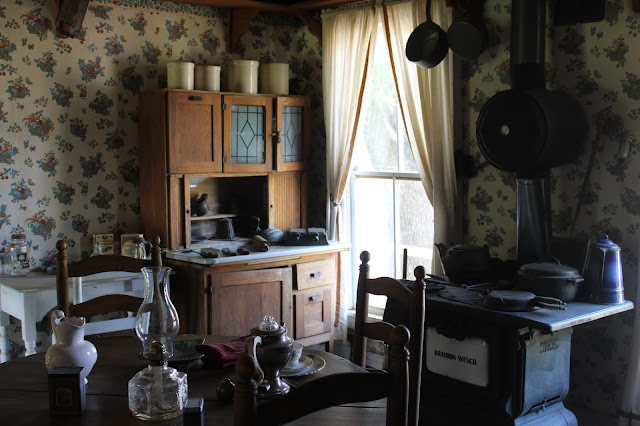 My last previous stop at Buffalo Gap was a couple of years ago, when I spent the night with Bill and Gayla Neal in south Abilene, only a few miles from Buffalo Gap's famous Perini Ranch Steakhouse. Bill and Gayla treated me to a superb dinner at Perini's, and I began to think that soon I needed to once more tour the Buffalo Gap Historic Village. Bill and Gayla, knowing that I was coming in their direction this spring, very kindly invited me to stay with them again. I was eager for another visit with them, but when I realized that I was running ahead of schedule, I stopped at Buffalo Gap. Any history buff interested in the Texas frontier will enjoy a tour of Buffalo Gap Historic Village.