I spent December 23-24-25 in Colleyville with my daughters, sons-in-law and grandchildren. Our Texas family enjoyed a grand Christmas, including great food, gifts and more gifts, a wonderful church service and a surprise visit by Santa Claus to the three littlest grandchildren on Christmas Eve night. 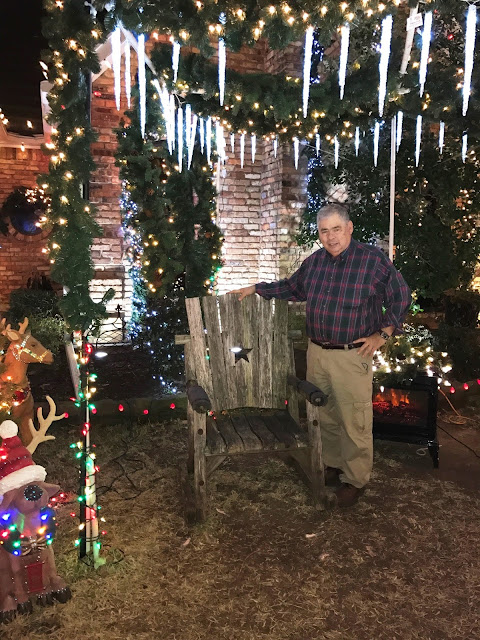 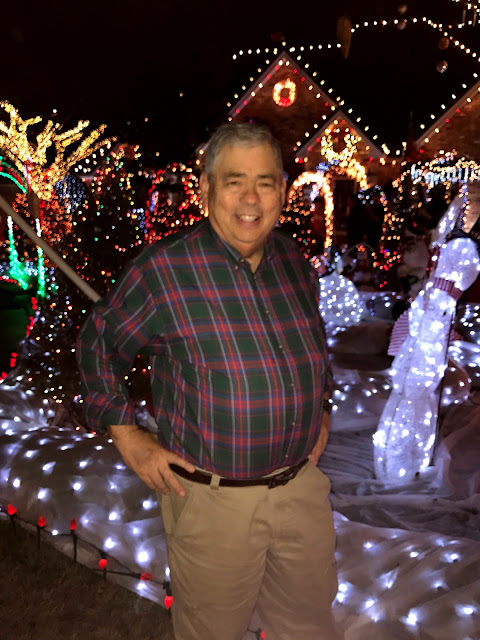 Early on Christmas Eve Evening, ten of us piled into a couple of vehicles and made a short drive to the Glenbrook neighborhood of Bedford. Twenty-five years ago, the Glenbrook Home Owners’ Association Christmas Committee decided to create a spectacular, Texas-themed decoration throughout their neighborhood. Their theme was based on a children’s book  by Leon Harris, published in 1952 and entitled The Night Before Christmas – In Texas, That Is. Santa, wearing jeans and a ten-gallon red Stetson, is riding in his buckboard toward the cabin of Buddy and Sue:


As he stepped from the buckboard

He was really a sight,

with his beard and moustaches

So curly and white.

As he burst in the cabin

And both so astonished

That neither one spoke.

And he filled up their boots

With such presents galore 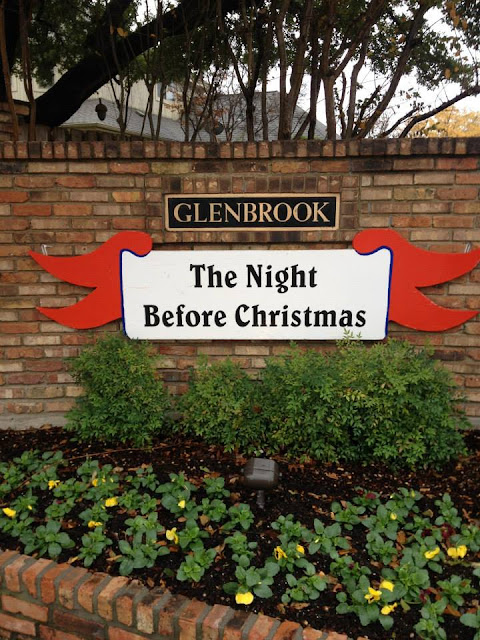 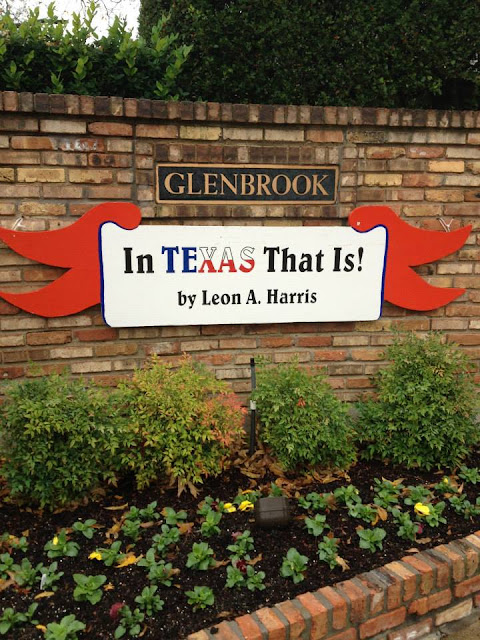 Some houses in the Glenbrook neighborhood set up story boards with excerpts from the book and pictures of Texas Santas. All yards are lined with bright red lights, and decorations include armadillos and cactus and cowboy boots, along with more traditional Christmas yard art. 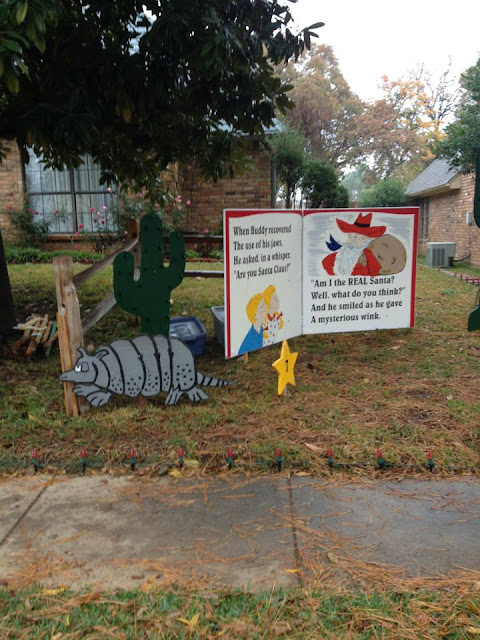 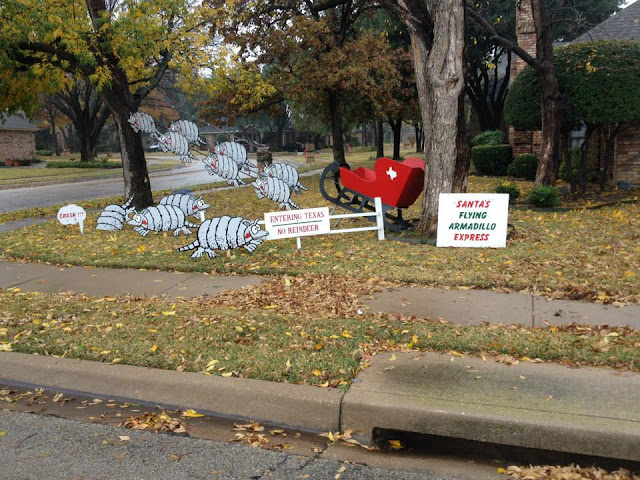 As we drove into Glenbrook Christmas 2016, we were delighted by imaginative decorations, beginning with a Texas Santa in his buckboard flying through the air courtesy of his eight armadillos. The most spectacular yard was a wonderland at the top of a cul-de-sac. Like everyone else, we parked and walked through the magical displays. And when we finally drove away, I knew I had the subject for a truly Texas Christmas blog. 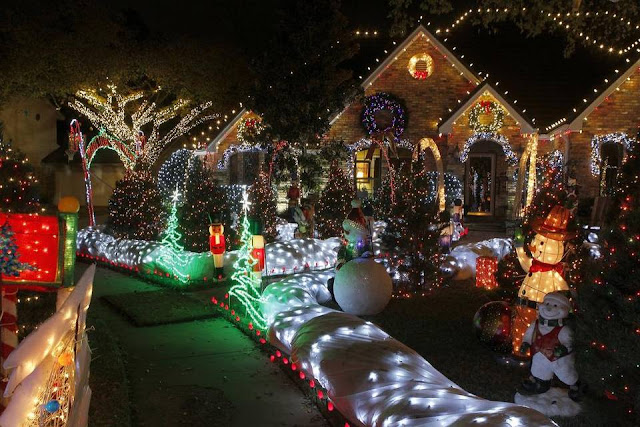 On Friday morning, November 18, I appeared as State Historian at O.C. Taylor Elementary School in Colleyville. Three of my grandchildren are students at O.C. Taylor: second-grader Addie Gormley and first-grade twins Reagan and Nolan Gormley. Last year I delivered a program at O.C. Taylor to the combined fourth- and fifth-grade History classes. This year I was asked by the fourth- grade teachers to return with a program on Texas cowboys, cattle drives, cattle ranches – the entire cowboy culture. Learning that I would be on-campus, the second-grade teachers asked me to talk with their combined classes about a number of subjects pertaining to Texas heritage. I was delighted to comply, because this appearance included an overnight stay beforehand with my three youngest grandchildren and their parents, Drew Gormley and Berri O’Neal Gormley. Indeed, that evening a school activity was scheduled for O.C. Taylor students in a gymnasium setting so I enjoyed the bonus pleasure of watching my grandkids cavort around a gym with their teachers, administrators, and fellow students.


The O.C. Taylor school day opens with a closed circuit TV newscast, directed by two youngsters manning the news desk. A weather  girl clad in a rain coat gave the weather forecast, followed by a young lady announcing the lunch room menu. Afterward, I was introduced on camera, clad in cowboy attire and standing proudly with my grandchildren, as a special guest for the morning. Shortly afterward the fourth-grade classes were brought into the library where they were highly attentive to my props and posters and stories about Texas cowboys and longhorn cattle. The last few minutes were devoted to a lively Q and A session which proved that this iconic Texas subject had connected with the latest generation of students. 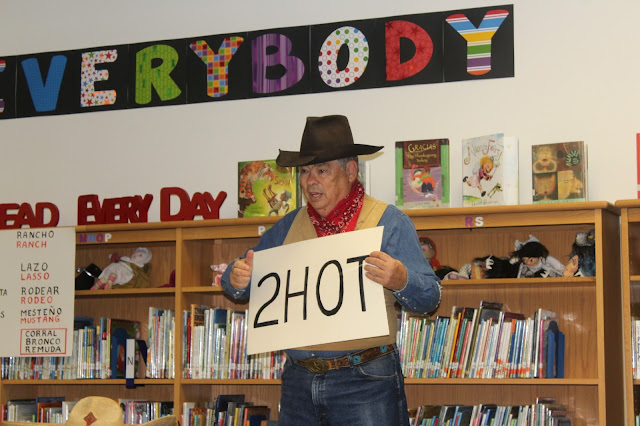 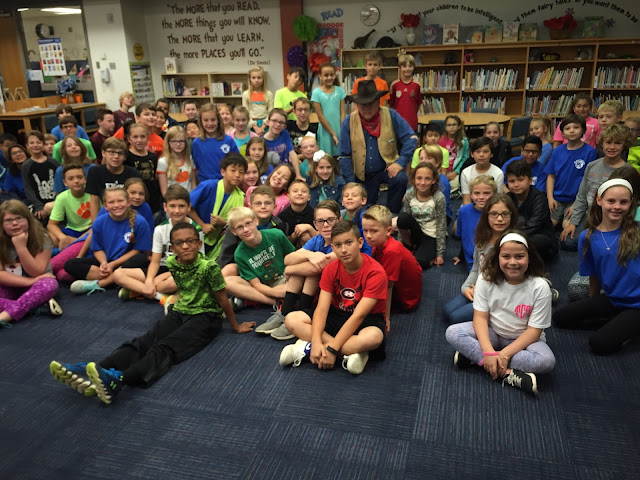 Another set of props and posters were set up in a vacant classroom and a few minutes after I arrived, the second-grade students were conducted in by their teachers. The topics requested of me by their teachers worked with these students, and the Q and A which followed underscored the preparation which the teachers had already accomplished in their classrooms. I was strongly impressed by the students, teachers and administrators of O.C. Taylor Elementary, and I was reassured about the future of Texas History instruction in such schools. 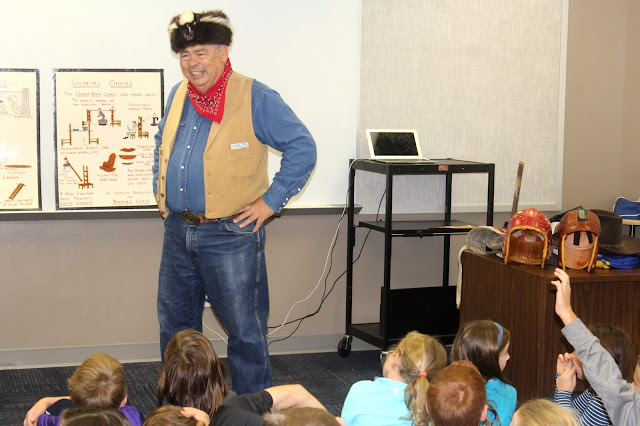 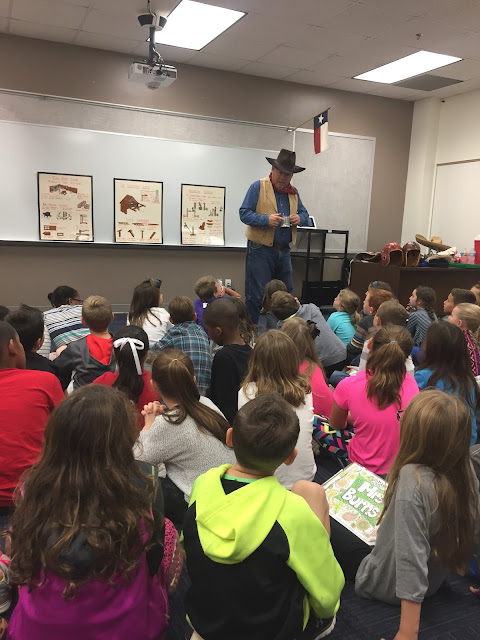 A few days earlier I had another gratifying State Historian experience with granddaughter Jessie L. Martinez, who is a seventh-grade Texas History student at Danny Jones Middle School in Mansfield. Jessie is named after my mother, Jessie L. Standard O’Neal. Mother was named for her grandfather, Jessie L. Standard, who rode as a trail driver during the 1870s and 1880s out of Lampasas County. Jessie’s father, Rudy Martinez, is a federal banker in Irving, but his Martinez family makes their home in Corpus Christi and Brownsville. Jessie has deeply embraced her Tejano heritage, and she is looking forward to her Quinceañera in a couple of years. Jessie was present at the State Capitol when I was sworn in as State Historian by Governor Perry.  With such a deep-rooted Lone Star heritage, Jessie has thrown herself into her Texas History studies this year. Her mother is my oldest daughter, Lynn O’Neal Martinez, an award-winning teacher of Social Studies and Language Arts in the Mansfield ISD. Recently she spoke to me about Jessie’s growing fascination with Texas History, and suggested that I plan a weekend field trip with my granddaughter. Of course I was thrilled, and on Friday evening, November 11 I met Jessie and Lynn in Corsicana, and by 8:00, we had driven to a Huntsville hotel. 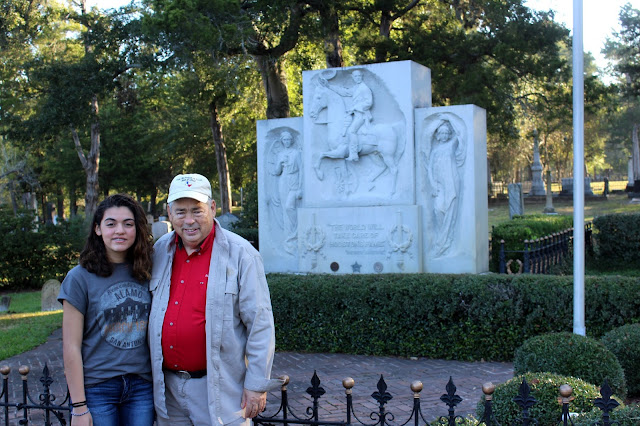 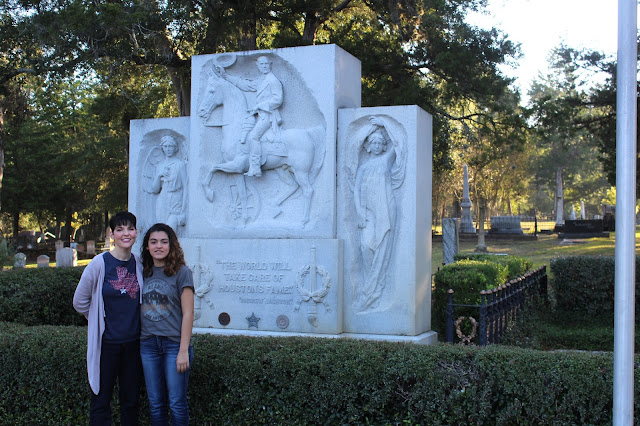 The next morning we visited Sam Houston’s impressive gravesite, then we drove by the State Penitentiary on our way to the Sam Houston Memorial Museum. It was still early so we walked over to the campus of Sam Houston State University to see the oldest college building in continual use in Texas, the handsome ante-bellum structure which opened at Austin College in 1851 and which, since Austin’s transfer to Sherman, has served SHSU in various uses. I also walked them past the ruins of Old Main, burned during the centennial year of 1979. Of course, I had a running commentary of stories. (They asked me, after all!) By then the remarkable Sam Houston Memorial Museum was open, and we took our time. Outside we toured Sam’s beloved Woodland Home and the Steamboat House, where he died in 1863. Next we drove to the towering 67 foot statue of Big Sam, and there Jessie eagerly visited the gift shop. 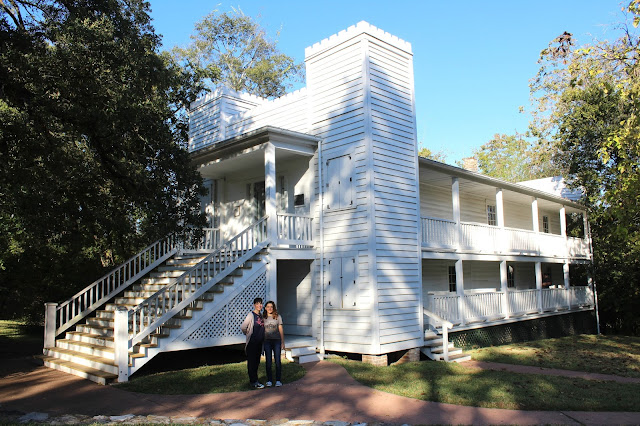 After a quick lunch, we drove to Washington-on-the-Brazos, first touring The Star of Texas Museum, with its student-friendly exhibits. Next we explored Barrington, the plantation of Dr. Anson B. Jones before going to Independence Hall, which Jessie recently had studied. We took the well-marked walking path around the historic old town site and had a stop at the ferry site, before finishing at the excellent Visitor Center and Gift Shop. As we returned toward Corsicana, we made brief stops in Navasota, including the statue of young City Marshal Frank Hamer, and the picturesque 1894 Grimes County Court House in Anderson. We reached Corsicana in time for Lynn and Jessie to drive home. 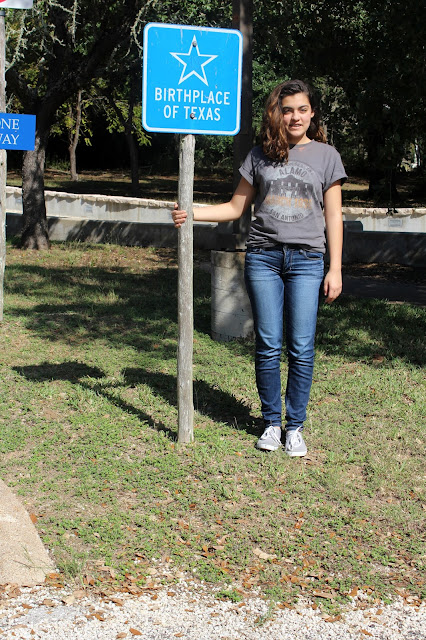 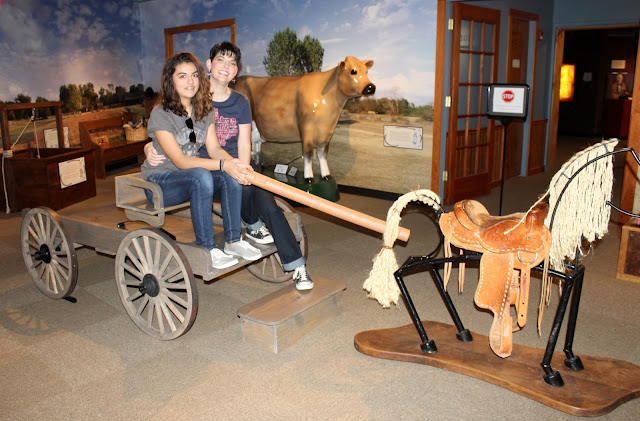 I spent the night in Corsicana, before driving into the Hill Country for a Sunday visit with my sister in Lampasas. Early in the week I made State Historian appearances at the TACRAO Annual Conference in Marble Falls and at a TSHA Texas History Teachers Conference in Dallas (as described in the previous blog). But I finished the week at O.C. Taylor Elementary in Colleyville. A couple of days later I received from granddaughter Jessie a color brochure that she and her father put together as a memento of our Texas history field trip. Nothing could be more deeply gratifying to a State Historian.
Posted by Unknown at 7:39 PM 1 comment: