A Busy Saturday in Carthage

I've been on the road the past few weeks delivering Texas State Historian programs to a variety of groups around the Lone Star State. I finally returned home to Carthage on Thursday evening, August 10, but a couple of key events awaited the State Historian. 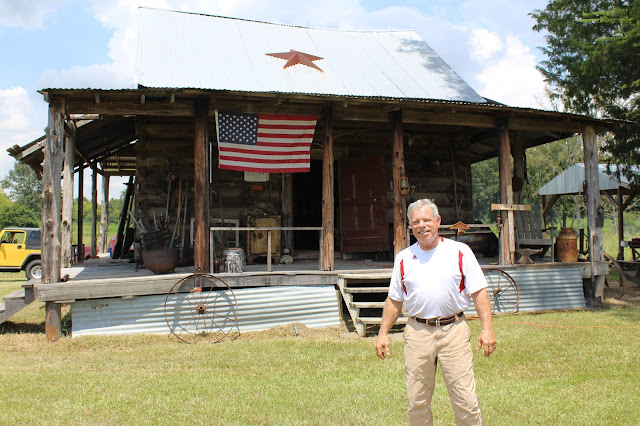 Pat Browning at his historic log cabin
The 20th Annual Texas Country Music Hall of Fame Weekend included the John Ritter Tribute Showcase on Friday night, August 11, the Tex Ritter Roundup on Saturday morning, the annual Texas Country Music Hall of Fame Induction Show on Saturday night, and a Sunday morning cowboy church service. It has been my privilege to serve as a board member since the museum's inception, and each year I write the biographical sketches of the new inductees for the program.


But on Saturday afternoon I had another engagement as well. For the past nine years a hamburger social and two-hour coaches' interview program has been held on the Saturday just preceding football season. The event is sponsored by Pat Browning, longtime coach and administrator in Carthage, and by Jerry Hanszen, owner of KGAS Radio, which broadcasts CHS Bulldog football games, as well as the Texas Country Music Hall of Fame Weekend programs. This annual event is held at Pat's 19th-century log cabin in the country. 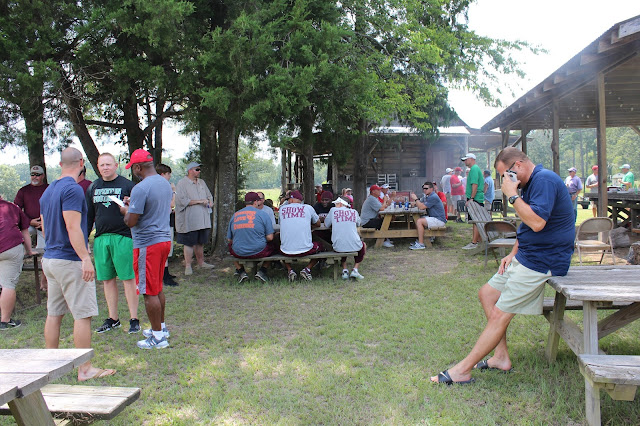 During this nine-year period, Coach Scott Surratt has led the CHS Bulldogs to five state championships, including three in a row: 2008-2009-2010, as well as 2013 and 2016. Coach Surratt was at Pat's cabin, along with members of his staff, numerous coaches from other high schools, and former coaches. Early in my career I was head football coach at Anna High School and at Waskom High School, so I fell into the former coach category.


But I also was asked to lead off the two-hour broadcast with a historical segment on Texas high school football. I was delighted with the assignment, and I brought leather helmets, ancient jerseys, and other display items, since the program was being videotaped. Part of my historic focus was upon the coaches who have won three consecutive state championships: there are only four, besides Coach Surratt who, with five state titles, is rapidly attaining legendary status. I was followed on the broadcast by Coach Andrea McCray of Panola College, whose volleyball team was ranked Number One in the nation throughout most of the 2016 season.


An hour after the broadcast I headed for the Carthage Civic Center, where the 1,900-seat auditorium was sold out. Again it was my pleasure to reminisce for a moment over KGAS Radio about the past 20 years. I visited with Tommie Ritter Smith, and I had a quick hello with Linda Davis, a graduate of Carthage High School who was in my class at Panola College, before moving to Nashville to begin a stellar career in Country Music. A Grammy-winning singer, Linda was inducted into the Texas Country Music Hall of Fame in 2009.


Tracy Byrd, a 2015 inductee, was emcee for the night, and he opened the show with a terrific singing performance. Another featured performer was T. G. Shepard, who also introduced his talented wife, Kelly Lang. Tracy Pitcox of Brady was presented as 2017 Disc Jockey Hall of Fame Inductee. In Brady Tracy owns Heart of Texas Records, Heart of Texas Recording Studio, and Heart of Texas Events Center - where I was invited to present a State Historian program in 2013. The 2017 Pioneer Award was presented to Mo Jelandarzedah, owner of Mo's Place in Katy.


The 2017 Hall of Fame Inductees were Bobbie Lee Nelson, a gifted pianist who is the older sister of Willie Nelson and who tours and records with Willie, and Kenny Rogers. A renowned performer, Kenny has sold more than 100 million records worldwide, he starred in several TV movies as "The Gambler," and the list of his musical awards is staggering. In 2016 he launched The Gambler's Last Deal, a farewell tour in which he is accompanied onstage by lovely Linda Davis. Kenny's performance electrified the Hall of Fame crowd.

A Weekend of Museums and the Texas Rangers Heritage Center

Several months ago I was invited by Dr. Jody Ginn, Board Member and Historical Consultant of the Former Texas Rangers Association, to present a program at a day-long conference on Texas Rangers on Saturday, August 5. The conference was to be held at the new Texas Rangers Heritage Center, a work in progress on the eastern outskirts of Fredericksburg. I was delighted to add the presence of the State Historian to a conference on the iconic Texas Rangers.


On my way to Fredericksburg, I spent Thursday night in Lampasas, visiting with my sister, Judy O'Neal Smith, and other relatives in the area. Judy is an active member of the local DRT chapter and of the Lampasas County Museum Board. I've visited the museum on numerous occasions - Lampasas was the home town of our mother and grandparents - and there are many historical treasures on display there. But the museum has been closed for the past several months, undergoing renovations by museum professionals. When Judy and I entered the recently re-opened museum, which is housed in a venerable commercial building in downtown Lampasas, I was astonished at the transformation. Always worth seeing, the Lampasas County Museum now is markedly improved and is a treat for history buffs and other visitors. 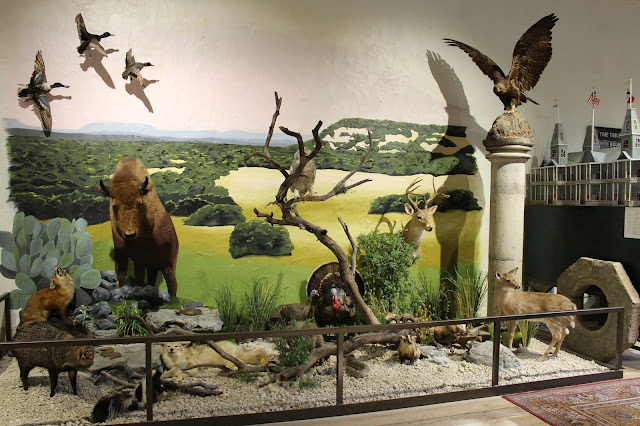 Departing Lampasas for Fredericksburg, I reached Llano at mid-day. I stopped to tour the superb courthouse, built in 1892. Indeed, on the Traveling Texas History Courses I conducted for 20 years out of Panola College, I always toured my students through Llano, so that they could see the courthouse, the impressive old jail, and other excellent examples of historic architecture. As I looked around the courthouse, I examined the historic photographs displayed along the walls of the main floor. A security guard, who turned out to be a native of Llano, cordially inquired about my visit. When I told him I was the Texas State Historian, he immediately marched me into the office of the County Judge, Mary S. Cunningham, introducing me as a visiting state official. 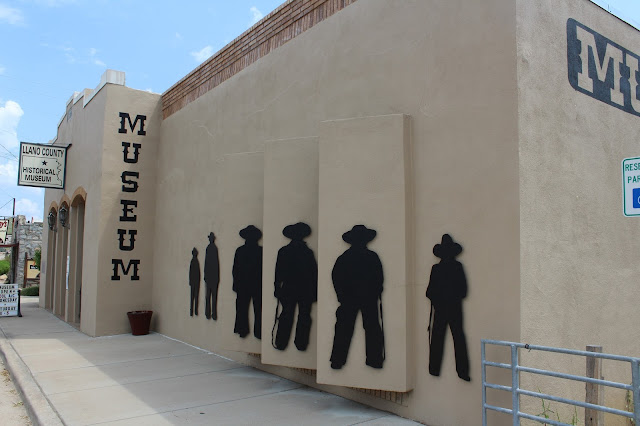 Encouraged by my reception, I next drove to the Llano County Museum, which I had never before visited. I introduced myself to Museum Director JoAnn McDougall, who proudly showed me various highlights of the displays. I asked questions about local history, and JoAnn responded with enthusiasm and a great deal of information. Llano is fortunate to have such a charming and knowledgeable native daughter in charge of the community's historic repository.

After arriving in Fredericksburg later on Friday afternoon, I paid a quick visit to a fine local museum, Fort Martin Scott, which is the only one of the original line of Texas frontier forts which still stands. Established in 1848, the fort is well-maintained and stands just west of the Texas Rangers Heritage Center. 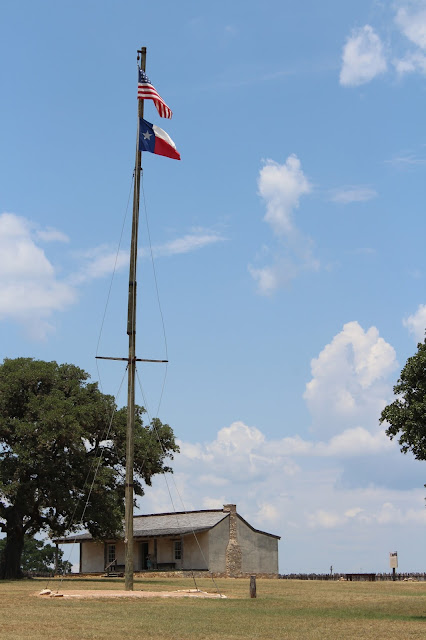 On Saturday morning, when I drove into the spacious parking lot of the new Texas Rangers Heritage Center, a splendid Ranger group statue immediately caught my eye. Nearby, Ranger re-enactors from every historic period had erected an encampment, complete with displays from a 19th-century cannon to a Thompson machine gun (the famous "tommy gun" of the Bonnie and Clyde era). 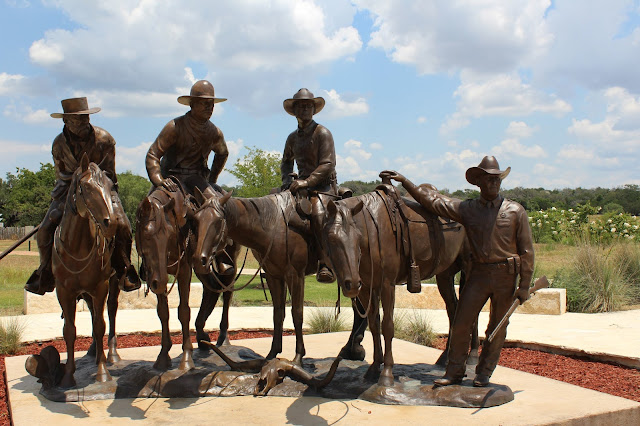 Other impressive weapon collections were displayed beneath the handsome pavilion where the conference took place. More than 120 attendees included retired Rangers, Ranger descendants, and current Texas Rangers, and it was a privilege for me to meet these men and women. 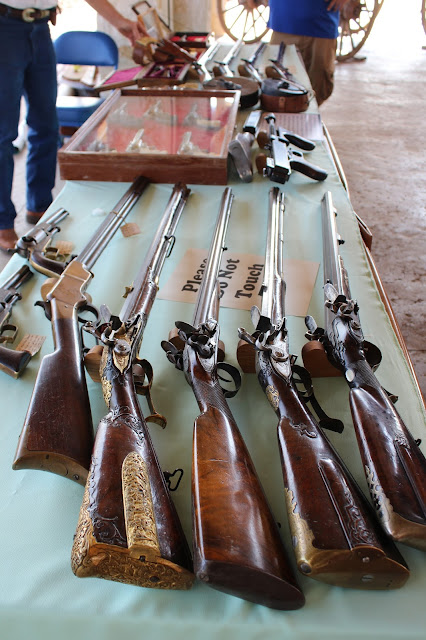 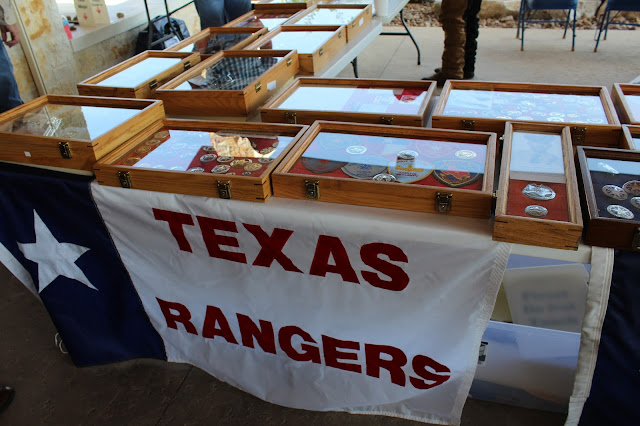 Jody Ginn introduced the first of six speakers, Donaly Brice, retired state archivist and author of The Great Comanche Raid. Each speaker was allowed 40 minutes, and Donaly spoke with great authority on the dramatic 1840 event. I was up next, presenting a program on "Texas Rangers and the Evolution of the Revolving Pistol." I focused on the period from 1844 through 1875, when Rangers were defenders of the Texas frontier. During this era Texas Rangers served as horseback warriors against Comanche and Kiowa raiders, as well as against Mexican bandidos along the Rio Grande border. Not until the frontier was secured did the Texas Rangers become a law enforcement body. I used a number of replica pistols and gun rigs to illustrate this program. The audience was ideal for my topic, and I greatly appreciated the response during and after my presentation. 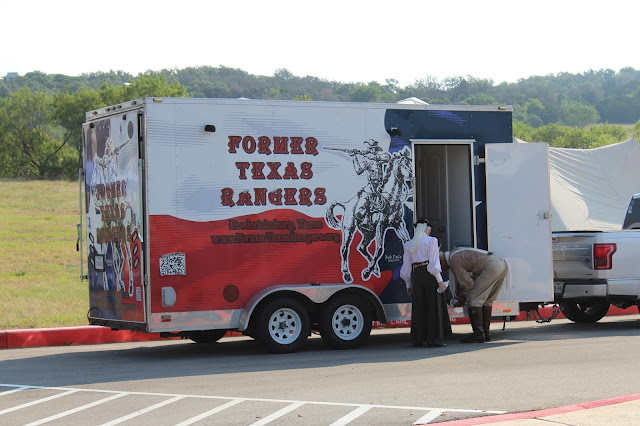 I was followed by Dr. Richard McCaslin with a program on famed Ranger leader John S. "Rip" Ford. After a delicious catered lunch of Bar B Q, programs were presented by Chuck Parsons on Ranger Captain John Hughes, by Dr. Harold Weiss on Captain Bill McDonald, and by Dr. James Kearney on the Stanford-Townsend Feud. A panel concluded the conference. 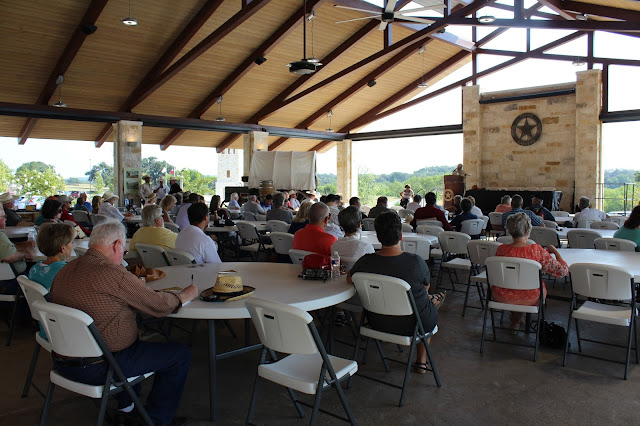 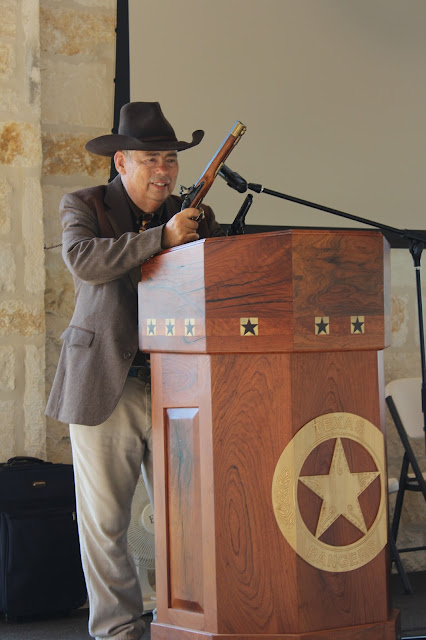 Posted by Unknown at 6:20 AM No comments: