On Thursday, January 12, I drove to Tyler for my first appearance of 2017 as State Historian. During the fall of 2016 I was contacted by a former student, Neashia Simpson, with a request to appear at King’s Academy Christian School, where she has taught for 9 years. King’s Academy is a K-12 school which has operated for 12 years, renting classroom and recreational space from Colonial Hills Baptist Church in Tyler. 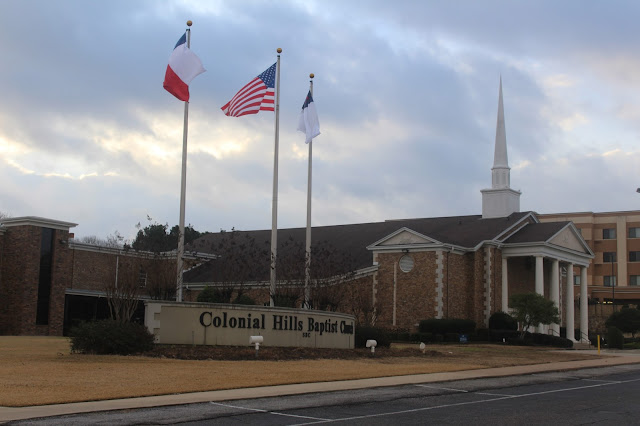 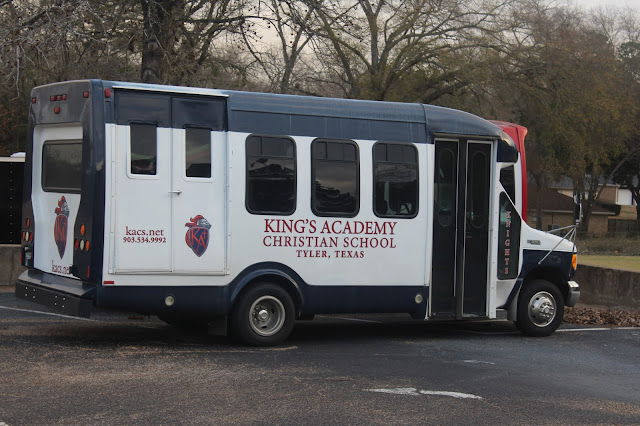 I was delighted to hear from Neashia. It had been more than 20 years since we had last seen each other, when she was a student in one of my Traveling European History courses conducted through Panola College. It was a pleasure to catch up with her, and of course I was delighted to arrange a program at King’s Academy. I was asked to address grades 7-12 during the weekly chapel assembly, 8:55 - 9:40 on Thursday mornings. We decided that a program on the iconic Texas cowboy would appeal to such a broad range of students. Among Neashia’s teaching assignments is journalism, and I gladly agreed to stay after chapel for a student interview.

Thursday, January 12 was the first chapel assembly of the New Year. There was an opening prayer, announcements were made, and I was introduced by Neashia. The assembled students were highly attentive as I portrayed the color and deep appeal of the cowboy culture which developed in early Texas and spread throughout the West. 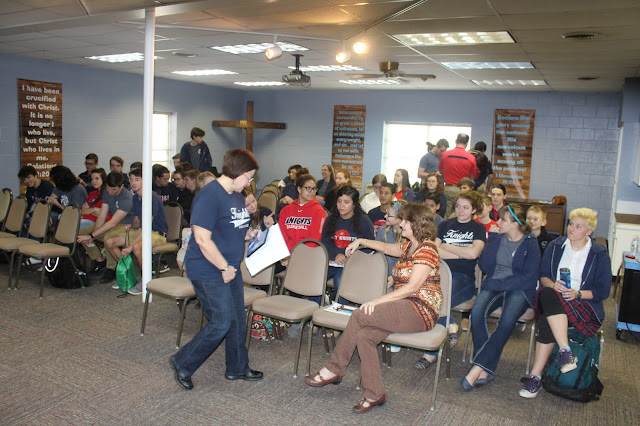 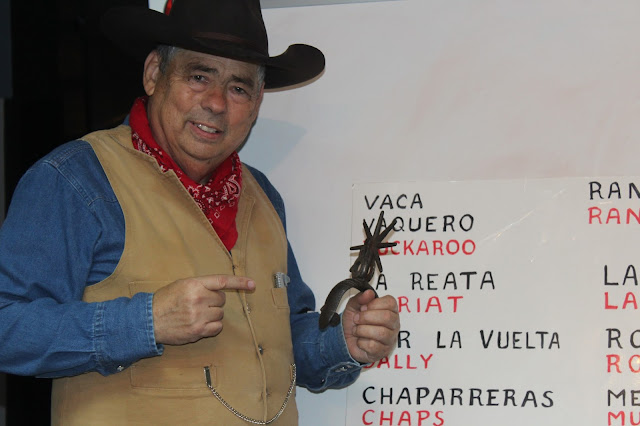 It seemed appropriate to close with the story of “The Cowboy Preacher.” L.R. Millican was a gun-toting teenaged cowboy in Lampasas County during the 1870s. But he experienced a religious conversion at a camp meeting, and he began preaching the gospel. Reverend Millican’s work took him across West Texas, where he pastored – and often founded – Baptist churches in San Angelo, Pecos, Midland, Big Spring, El Paso, Fort Davis, Toyah, Van Horn, Odessa, Sierra Blanca, Clint, Fort Hancock, Presidio and other communities. Reverend Millican ranged to the far corners of West Texas to distribute Bibles and Baptist literature. “In the early part of my ministry I went always on horseback, sometimes breaking in a bronc for its use in my work, making many long trips over the plains and through the mountains, sometimes with nothing but my saddle blanket for a bed, saddle for a pillow and the heavens for a covering.  Have worn out several pairs of saddle bags during my early ministry carrying good books and tracts to give away or loan.” Millican was instrumental in organizing the famous Paisano Baptist Encampment near Alpine, conducted among cowboys and ranchers for decades by the legendary George W. Truett, who pastored First Baptist Church of Dallas for 47 years.

Following the assembly, Neashia led me to the journalism room, where I was interviewed by Gyna Troscrier. Gyna and I were taped by Logan Sewell, and after the interview we took photos. I had a most enjoyable experience with the students of King’s Academy – it was a pleasant start to 2017.

Posted by Unknown at 7:30 PM No comments:

The Daughters of the Texas Revolution organized in 1891, and the first president was the widow of Dr. Anson B. Jones, final president of the Republic of Texas. Today there are 7,000 members and 107 chapters. Aside from the Elisabet Ney Chapter in Washington D.C. – where there are always numerous patriotic ladies from Texas – all of the chapters are located in the Lone Star State. Indeed, during the past five years I’ve had the privilege of addressing a number of DRT chapters across Texas.
But now there is a unique new DRT chapter: Lone Star Diamonds, based in Little Rock, Arkansas. Of course, because of proximity there are many Arkansas women with deep patriotic roots in Texas. During the latter part of 2016 several of these women worked to form a DRT chapter, and the organizational meeting was held in Little Rock on December 17. I was invited, as State Historian of Texas, to address the organizational meeting of the Lone Star Diamonds Chapter. To my great regret I had inescapable schedule conflicts. I especially wanted to post a blog on the spread of the DRT into Arkansas, and to my good fortune, just two weeks after the organizational meeting, I have the opportunity to put together this blog.

A driving force behind the organization of the Lone Star Diamonds Chapter is a dynamic young lady named Amber Friday-Brown. I met Amber Friday when she enrolled in one of my freshman history courses at Panola College in the fall of 2000. Amber was a recent graduate of Winnsboro High School who attended Panola on a band scholarship. But her passion was history.


She approached me after my opening class session with the news that she recently had joined the United Daughters of the Confederacy, and she told me of the various antebellum costumes she already had accumulated. She announced that she could hardly wait until I began to lecture on the Civil War. I asked her to develop a presentation on antebellum women, clothing, and manners. Her program was so good that I asked her to present it to other classes of mine, and I realized that she had a talent for presentation. During Amber’s two years at Panola College I helped arrange several appearances at UDC and at Sons of Confederate Veterans chapters. She always was well received.


Amber transferred from Panola College to College of the Ozarks at Point Lookout, Missouri, where she earned a BA in history and music. She spent her summers at Fort Macon State Park in Georgia, re-enacting antebellum females for the tourists. Periodically the fort staged an artillery demonstration. A cannon crew requires several “men,” so as a staff member Amber donned a Confederate artillery uniform and served the cannon.
Amber has remained active in UDC through the years, serving as chapter president for four years. Currently, she is president of the Arkansas Division of UDC, and she is recording secretary of the President’s Council of UDC. In 2013 Amber married J.T. Brown of El Dorado, Arkansas. J.T. is an enthusiastic Civil War re-enactor, and he is highly supportive of the travels required of Amber as a national officer of UDC.


Through UDC Amber met other Arkansas women with Texas roots. In May 2016 several of these patriotic ladies made application to the DRT office in Texas to establish a chapter in Arkansas. Several of these ladies previously had belonged to DRT chapters in Texas. The fledgling Arkansas chapter benefited from the strong leadership of Martha Batchelor, who agreed to serve as president. By December the chapter received its charter. A clever chapter logo was devised, and a chapter newsletter already has begun publication.


When I learned that Amber and J.T. were going to spend a week at Winnsboro during Christmas, we arranged to meet in Jefferson. We greeted each other at the historic Excelsior House, then proceeded on for our blog photos at the magnificent House of Four Seasons, where Amber and J.T. spent the first night of their honeymoon (before traveling to Natchez and New Orleans). Next we went to Jefferson’s 1903 Carnegie Library – one of only four Carnegie structures in Texas that still serves its original purpose – and sat around a table discussing the Lone Star Diamonds. And so I was able to put together a blog about the first Arkansas chapter of the DRT, while learning of rumors that Texas ladies in at least one other state are working to obtain a charter. 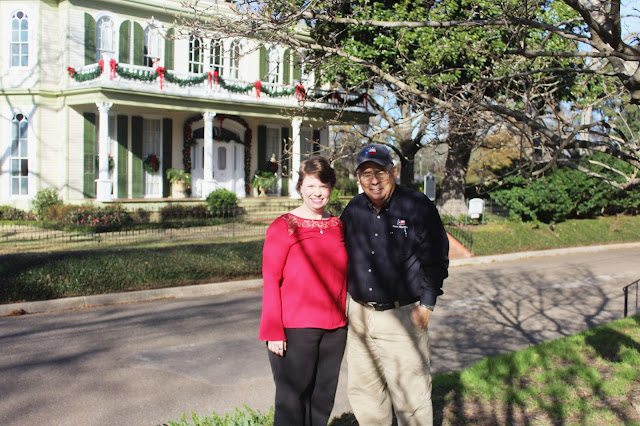 Posted by Unknown at 7:47 PM No comments: