On a lovely afternoon in early April the Panola County Retired Teachers Association met at the ranch of Gene and Brenda Giles. Gene and Brenda were Panola College students in my classes during the 1970s, and they later married and made their home in Carthage, raising two beautiful daughters. Gene has enjoyed a successful career as a banker, while Brenda became a master teacher. She long taught Gifted and Talented classes, specializing in social studies.


When she asked me to present the April program for the Retired Teachers, we decided that I would talk about cattle king John Chisum (an East Texan, raised and buried in Paris) at the Giles Ranch. The ranch was Gene's boyhood home, and the house has been handsomely renovated in recent years. Brenda decorated their country place in Texana. For our ranching program she planned a menu that included jerky and "trail" mix. 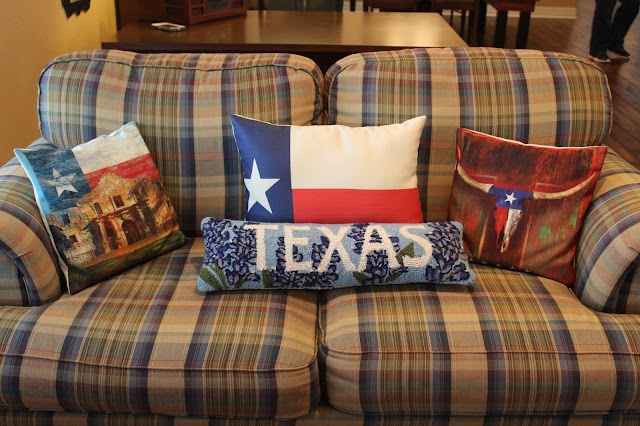 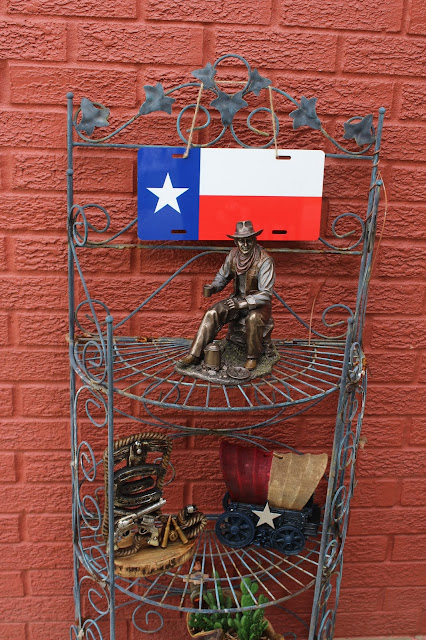 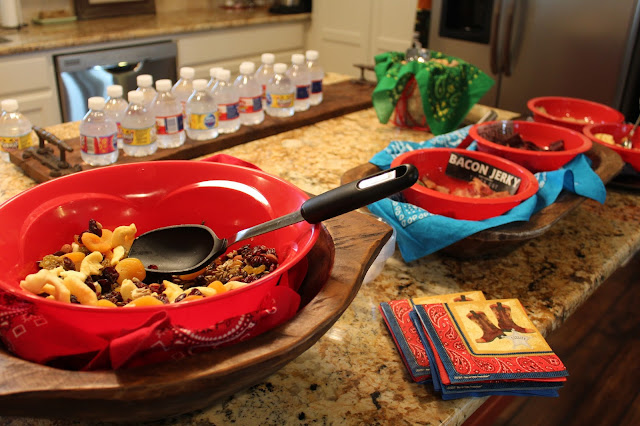 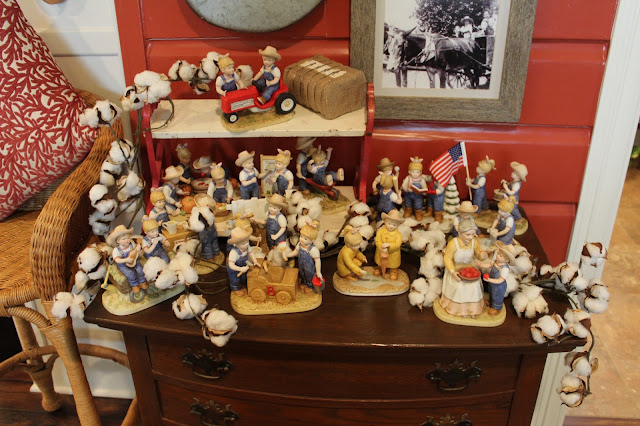 I began teaching at Panola College in 1970, so I knew virtually everyone in the Panola County Retired Teachers group. Chairs were set up within a pergola, with pastures in every direction. Western attire was on display, and I could not have asked for a more suitable setting for a program about my most recent book.


The following week I attended the 95th annual meeting of the West Texas Historical Association. I am a past president and fellow of the WTHA, and I've always enjoyed the historical interests of the membership. For this meeting I became part of a session in which WTHA Executive Director Tai Kreidler spoke on rancher John Hittson, David Murrah delivered a program on legendary cattleman C.C. Slaughter, and I made a presentation on Chisum. Our presider was Debbie Liles, a leading researcher/author on the range cattle industry.


The WTHA meeting was held in San Angelo. In the 1860s Chisum moved his open range operation from Denton and Tarrant counties to Coleman and Concho counties, so I got to present a program at a location where Jinglebob cattle once had roamed. Indeed, our session, "Revisiting Three 'Boss' Cattlemen of West Texas," attracted a large crowd. In all, more than 150 West Texans attended the meeting, and they were rewarded with numerous informative sessions. 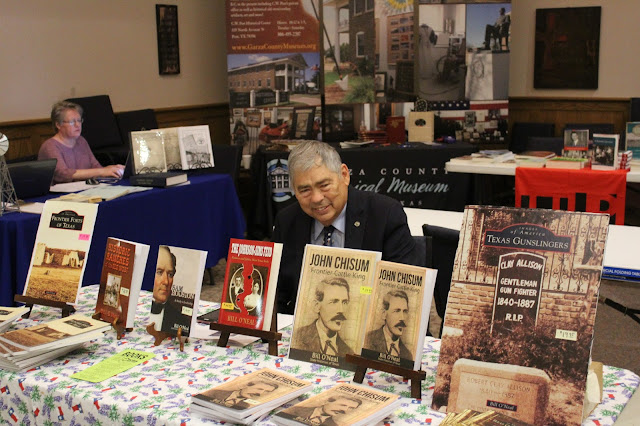 On Friday evening WTHA President Glen Sample Ely hosted a reception and banquet in the historic Cactus Hotel in downtown San Angelo. The catered dinner and the program were excellent, and we had a splendid view from the 15th floor. At the Awards Luncheon on Saturday, two new Fellows were announced to the crowd: Fredonia Pachal and Tom Alexander. A new slate of officers was approved, headed by Jean Stuntz of West Texas State University. We will be on the WTSU campus next April, as the WTHA will meet in Canyon.

Posted by Unknown at 8:06 PM No comments:

During the first two days of National Library Week, Sunday and Monday, April 8 and 9, it was my privilege to participate in events at two libraries. I began a rewarding and enjoyable series of library adventures 70 years ago, in 1948 at the Corsicana Public Library. As a first-grader I received a library card at my home town library, and I've been a regular patron of research libraries throughout a lifetime of writing non-fiction books. So it was my pleasure to be involved in library events on back-to-back days.


A few weeks ago I received a welcome invitation from Michael Barera, Archivist at the James Gee Library at Texas A&M University in Commerce. Last year Michael helped me with a research problem on short notice regarding John Chisum, and before that we met on the TAMUC campus when I addressed the Cross Timber Library Association. Michael is a Board Member of the Friends of the Library of the Commerce Public Library. He contacted me with the unexpected news that I had been inducted into the Commerce Public Library's Author's Park, a brick "walk of fame" in a small park adjacent to the historic library building, which opened 100 years ago, in 1918, as the U.S. Post Office. Michael explained that Author's Park is how the Commerce Public Library honors authors, musicians, and other artists associated with the city. 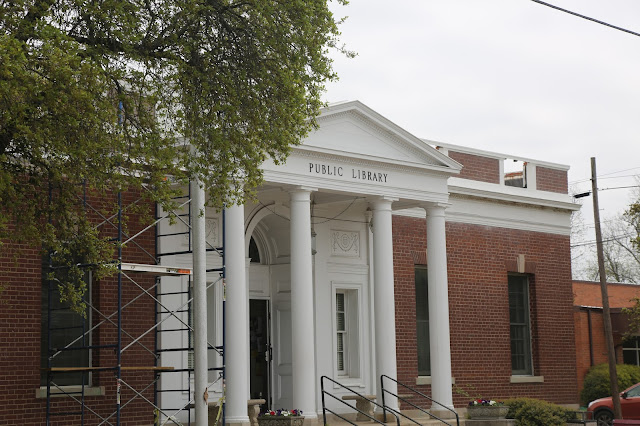 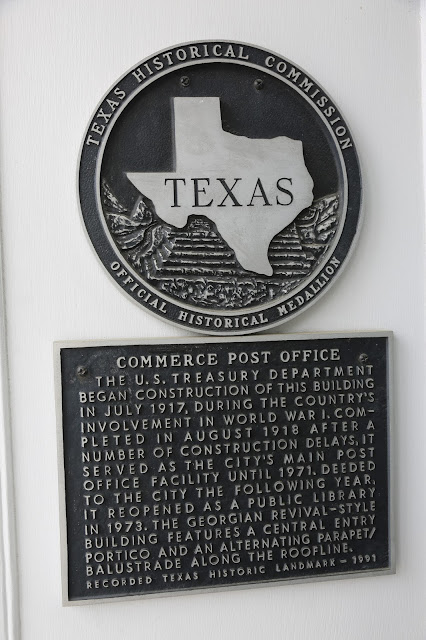 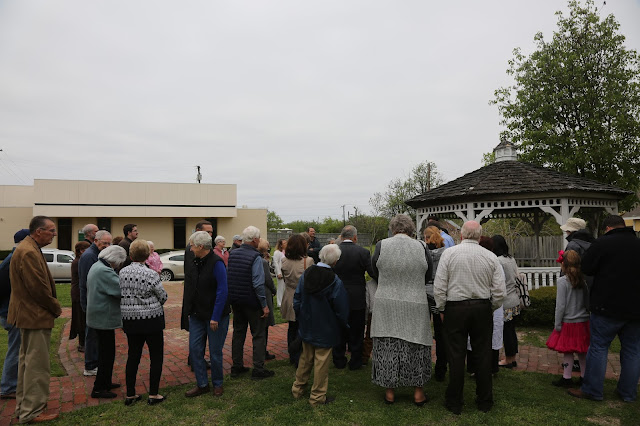 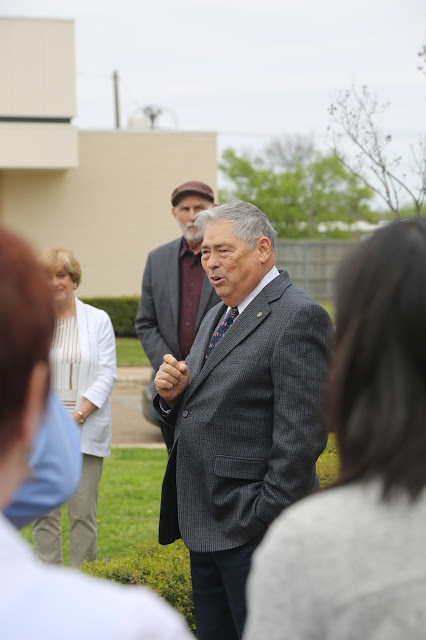 I came to Commerce during the 1960s, earning two degrees at East Texas State University, and in 2013 I was awarded an honorary Doctor of Letters Degree. Through the years I've participated in numerous other events in Commerce. The other Author's Park inductee for 2018 was Tina Fletcher Selvaggi, artist and author. Tina and I were welcomed by a crowd which included Friends of the Library, Library Director Gayle Gordon, Commerce Mayor Wyman Williams, and Dr. Keith McFarland, former president of TAMUC. 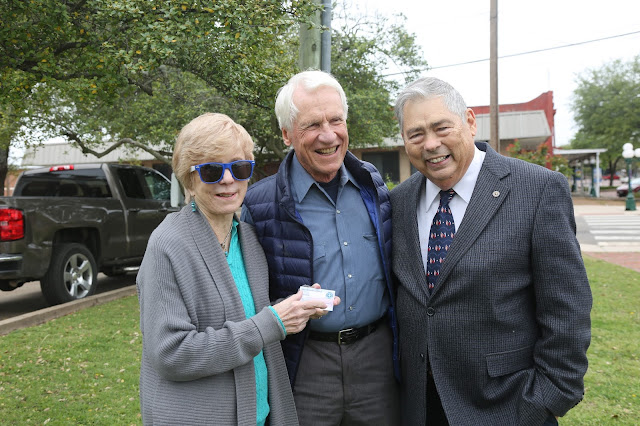 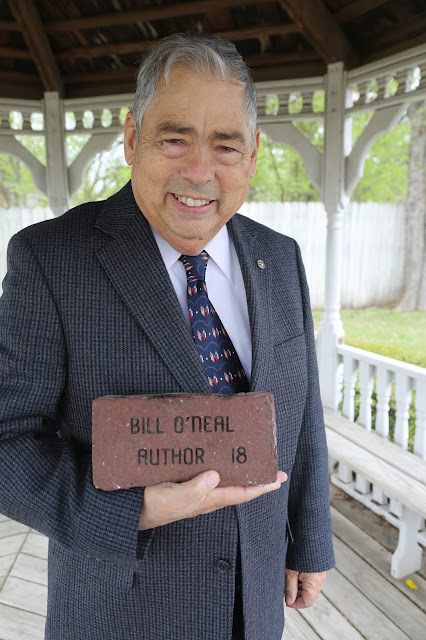 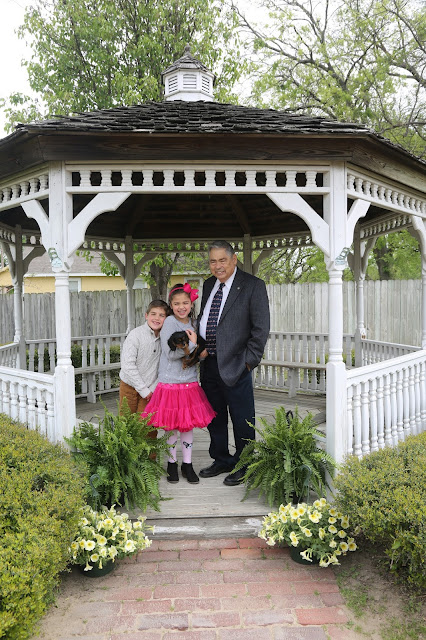 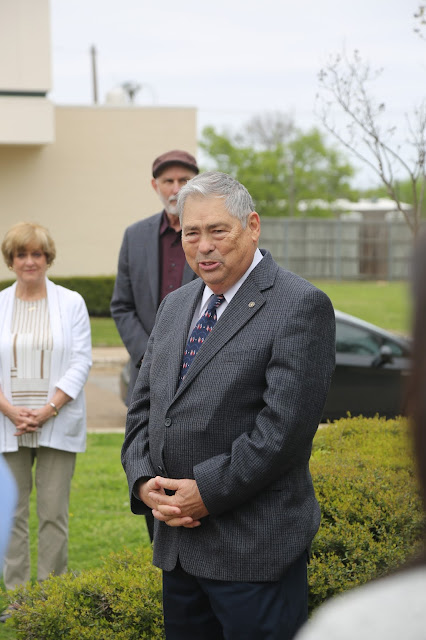 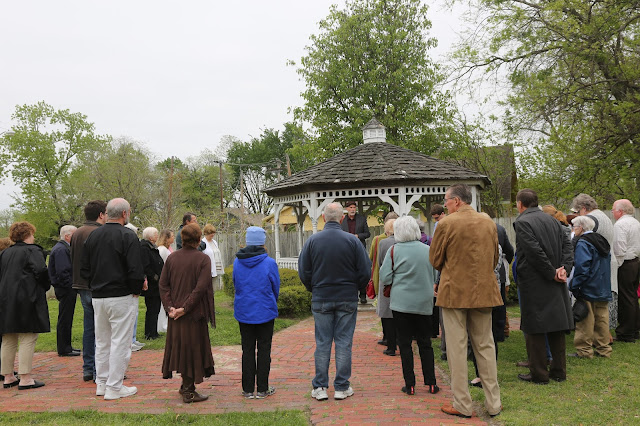 It was especially nice that April 8 was my birthday. My daughter, Berri Gormley, earned three degrees at TAMUC and is an administrator at the university. Her husband, Drew Gormley, holds an MBA from TAMUC. Berri and Drew brought their children, Addison, Reagan and Nolan, to Commerce on Sunday for a birthday lunch with me, and afterward we all went to the library. Following the ceremony in Author's Park, everyone went into the library for a reception, and I was delighted that the refreshment table included a birthday cake. 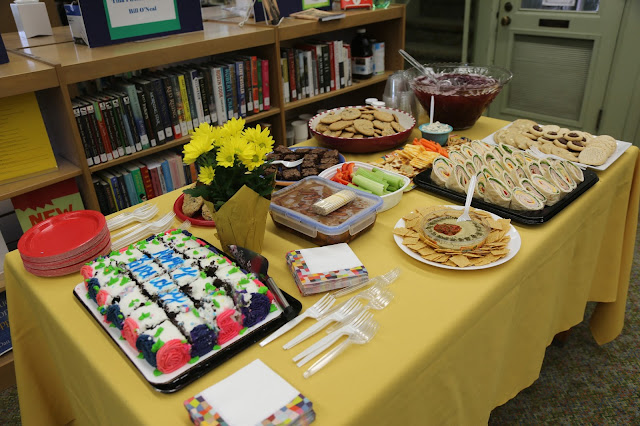 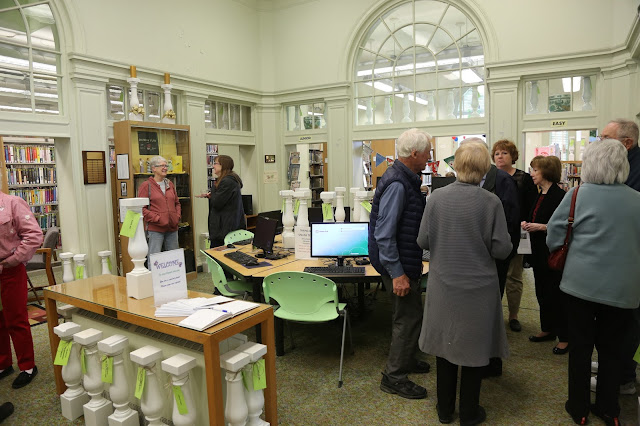 The next day I was at the M.P. Baker Library on the Panola College campus in Carthage. The library hosted a program/signing of my two new books, Frontier Forts of Texas (Arcadia Publications) and John Chisum, Frontier Cattle King (Eakin Press). For the second day in a row I enjoyed a crowd made up of book lovers and library supporters. Following a gracious introduction by Library Director Cristie Ferguson, I described the new books to a receptive audience. Refreshments were provided, and afterward I had the gratifying experience of signing a great many books to those in attendance. 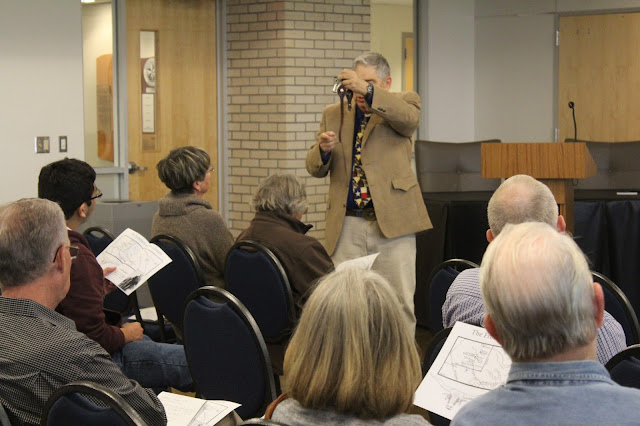 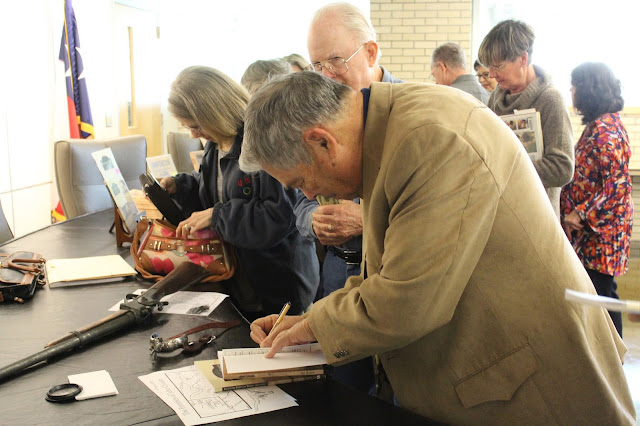 Posted by Unknown at 8:54 PM No comments:

From Fort Sam to Panola College

After church services on Sunday, March 25, I drove more than 300 miles to New Braunfels. The next morning I enjoyed a great walk through the historic downtown. For the first time I was able to tour the 1898 Romanesque Revival courthouse, which was the subject of a Texas Historical Commission renovation a few years ago. At mid-morning I made the 30-minute drive south to Fort Sam Houston, pulling into the parking lot at the golf clubhouse. I've been to the clubhouse three times in the past couple of years. It's a convenient meeting place, because it's adjacent to the base, but visitors don't have to go through the trouble of securing admission to the military post.

This time I had been invited to be the lunch speaker at a meeting of the Retired Officers' Wives and Widows Club. The last time I had been asked to speak at Fort Sam Houston was to a meeting of retired officers. Of course I couldn't resist talking about Sam Houston and his 1836 campaign which climaxed at San Jacinto. Sticking to the Sam Houston theme with the ladies, I discussed his three wives, with special attention to the love of his life and mother of his eight children. We enjoyed an excellent meal, and the ladies seemed to enjoy the domestic story of Houston's life. 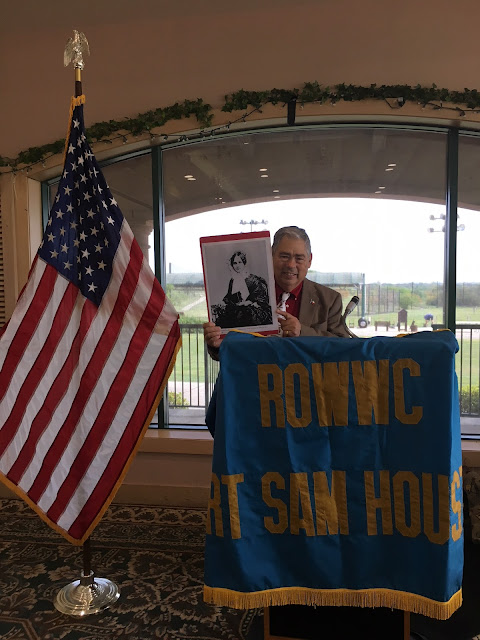 I returned home that evening, because I had an appearance on the campus of Panola College on Tuesday. Bill Offer now heads the history department at Panola. Several weeks ago he asked me to join him for an onstage interview for students and the public. When I asked Bill what information I needed to provide him, he smiled and reminded me that he was a retired Shreveport police captain and was an old hand at interrogations. Bill joined the Panola faculty a few years ago, and he has been an energetic and innovative force in the classroom. He has organized a History Club, and every year I've had the pleasure of interacting with Bill and his club in one event or another, so I was happy to await my "interrogation" by a history-minded cop.


It turned out that Bill wanted to talk about the office of State Historian and about the 70th anniversary of Panola County Junior College, which first enrolled students for the spring semester of 1948. Bill advertised the event as "An Evening with Bill O'Neal."  About five o'clock on Tuesday afternoon I brought a number of props to the Q.M. Martin Auditorium. Bill had reserved the Auditorium from Karen King, head of the Drama Department, who assigned several of her students to the event. They arranged two chairs and microphones and decorations on the stage, and when I showed up with a couple of bags of display items they quickly produced a table for me. The event was scheduled for 6:15, and as the crowd began to arrive I introduced myself to the students and visited with old friends from the community. By starting time an audience of just over 200 had gathered.


Jasmine Rhan, a lovely young lady from the Drama Department, introduced Bill Offer and the State Historian. Jamecia Taylor, a student of Bill's, opened the proceedings with an appropriate musical selection, "The Yellow Rose of Texas." Bill had several questions prepared for my "interrogation," then he asked me ten questions that he had selected from 140 questions submitted by his students. Later I illustrated my account of State Historian activities with items I've accumulated during my travels, producing some laughs from the audience. I also was pleased to introduce to the crowd Larry McNeill, who secured creation of the office of State Historian from the Legislature during his term as President of the Texas State Historical Association. Larry and his gracious wife, Rose, now live in a country home they have built near Tenaha, and it was a delightful surprise to me that they had come to the event.
﻿


The students seemed impressed at the role Panola College had played in sponsoring a significant statewide academic appointment, and when the program hour ended I was asked to pose for photos with a number of students. Bill Offer later told me that student response to our program/interrogation had been quite positive, and I was glad indeed that I had an opportunity to take part in a campus activity.
Posted by Unknown at 8:30 PM No comments: