On Monday, June 6, I was due to arrive at mid-afternoon at the offices of the Texas State Historical Association to "livestream" a "webinar" about the Alamo and San Jacinto. I drove into Austin early so that I could tour the Texas State Cemetery. I had not visited this historic burial ground in a great many years, and I realized that I was long overdue for an update. 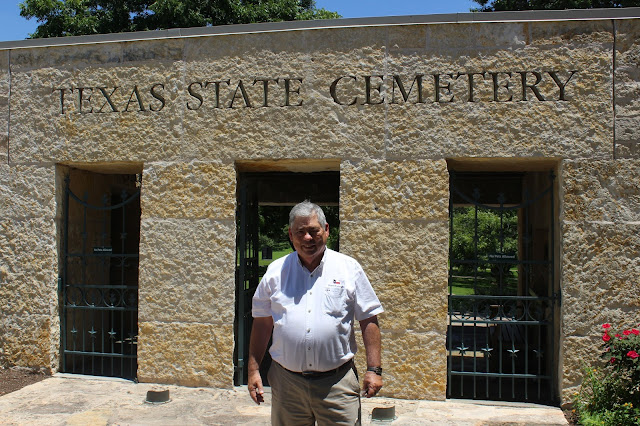 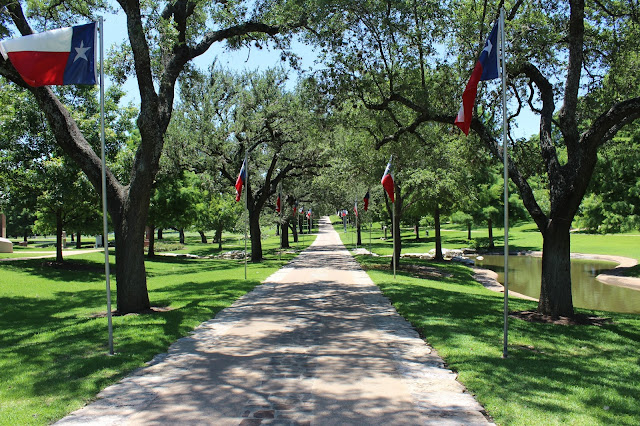 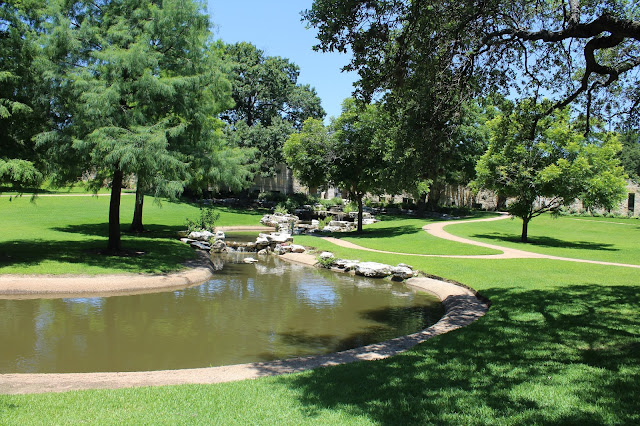 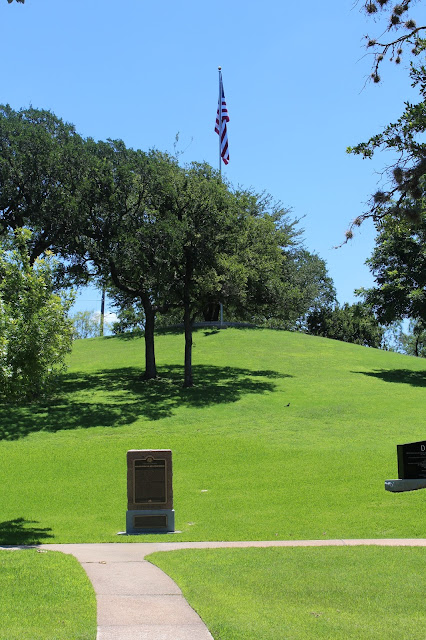 The Texas State Cemetery experienced its origin in 1851, when Gen. Edward Burleson - veteran of San Jacinto and Vice President of the Texas Republic - died and was buried in an isolated plot just east of Austin. Three years later the Texas Legislature marked Burleson's grave with a handsome monument and began to purchase surrounding land for a cemetery. During the Civil War Confederate officers were buried near General Burleson. Indeed, nine Confederate generals are interred in the Texas State Cemetery: General Albert Sidney Johnston and Major General John Wharton have the most striking monuments. Because the Texas Confederate Men's Home and the Confederate Women's Home were located in Austin, more than 2,000 Confederate veterans and widows are buried at the Cemetery. 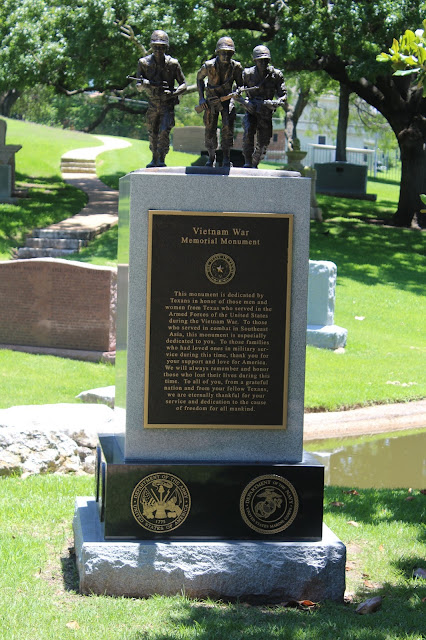 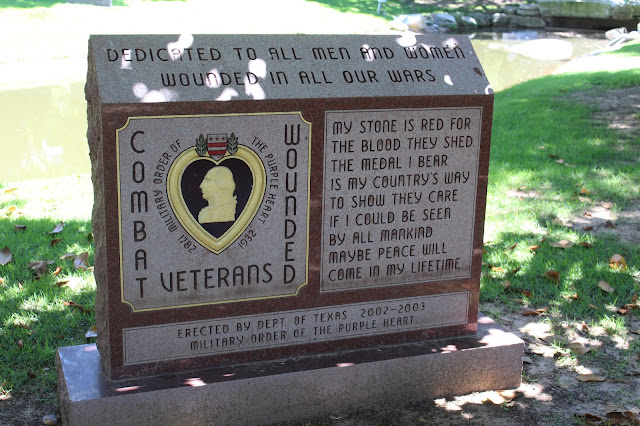 During the Texas Centennial in 1936, numerous Texas patriots were reinterred in the Cemetery. Today the Texas State Cemetery encompasses 22 hilly acres. The short paved roads though the Cemetery are designated State Highway 165 (the shortest State Highway in Texas). But when I first saw the facility it was unkempt and overgrown. In the 1990s Lt. Gov. Bob Bullock was appalled at the condition of the Cemetery, and he commenced a renovation beginning in 1994, climaxed by a formal rededication and reopening in 1997. 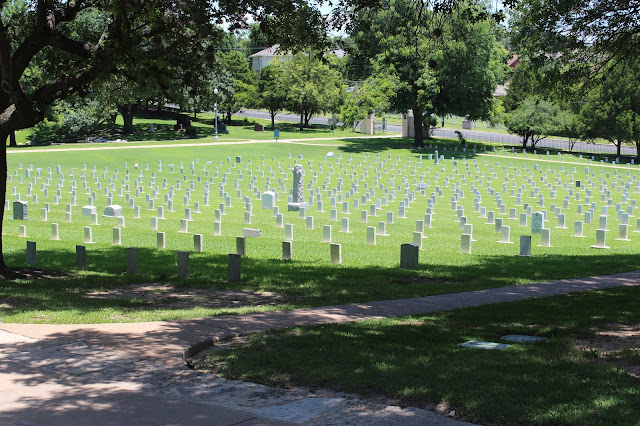 Close to 900 notable Texans rest on the scenic hill that comprises the southwest corner of the Cemetery. The monument for Stephen F. Austin appropriately towers above everything. Other Texas patriots include Big Foot Wallace and 15 signers of the Texas Declaration of Independence. 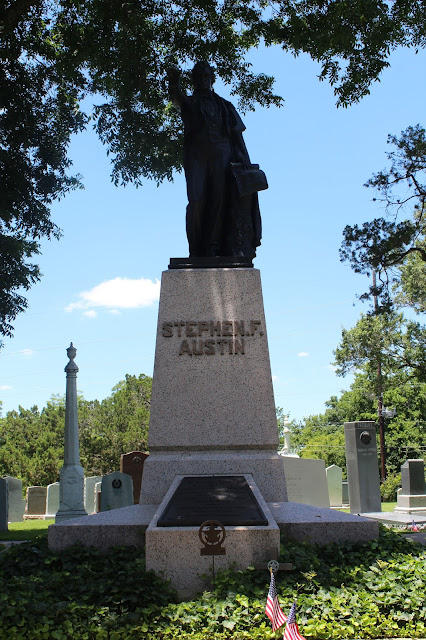 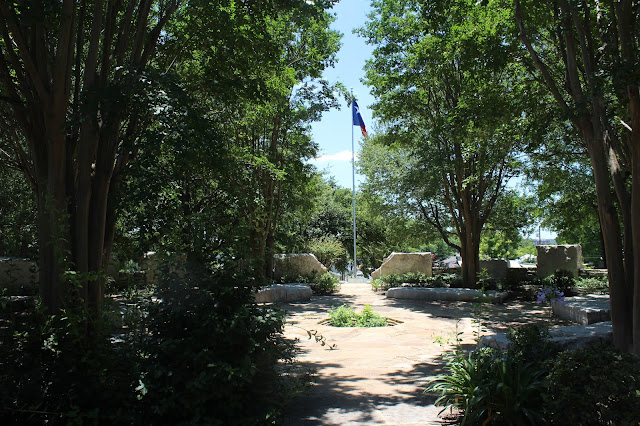 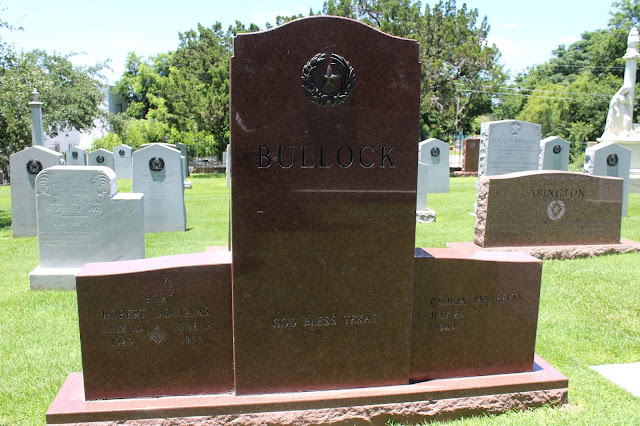 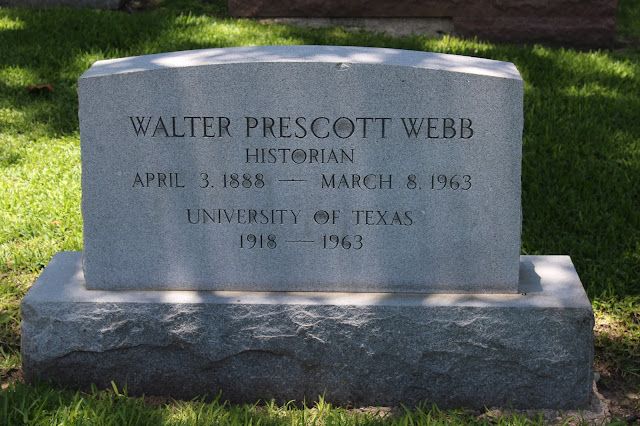 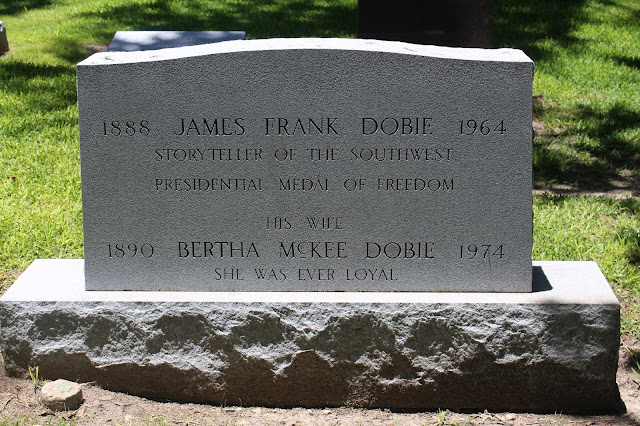 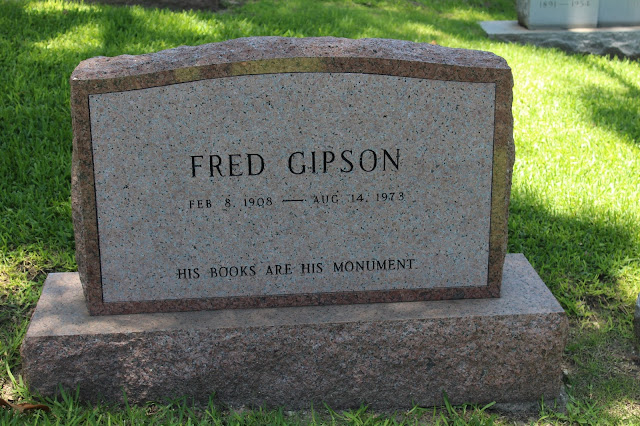 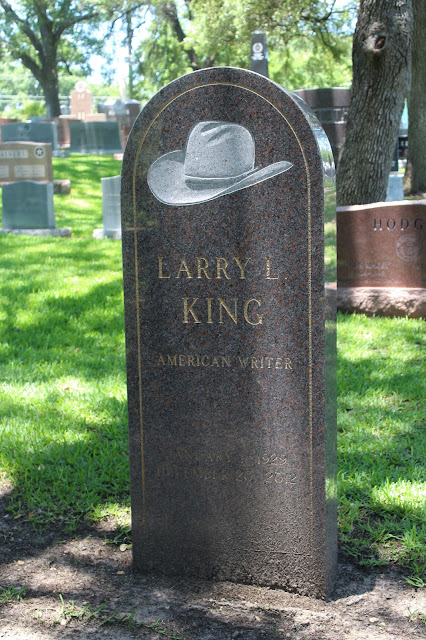 There are 13 Texas governors, along with 16 Texas Rangers and Navy Seal Chris Kyle. 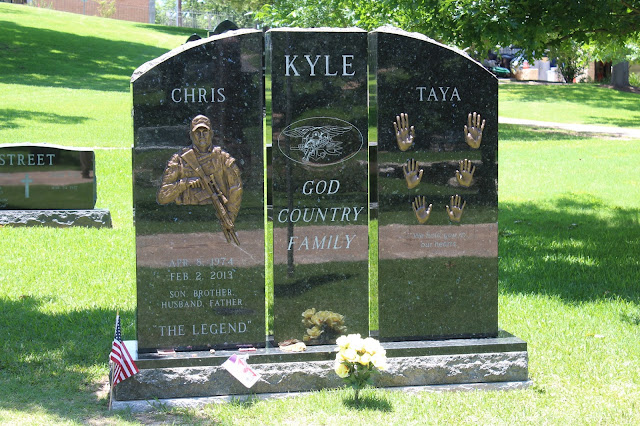 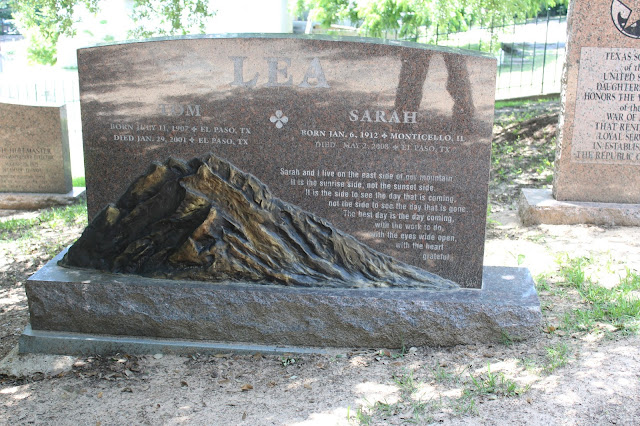 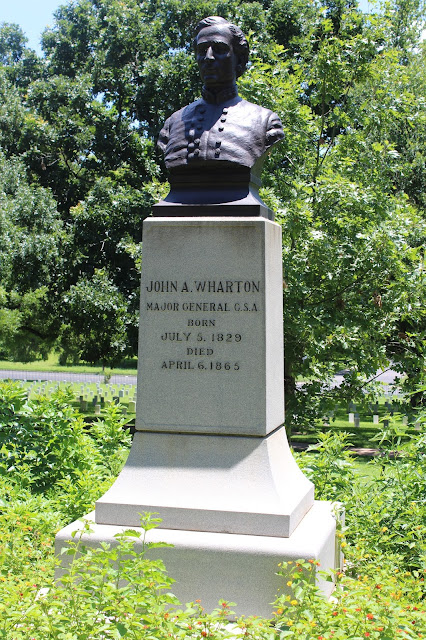 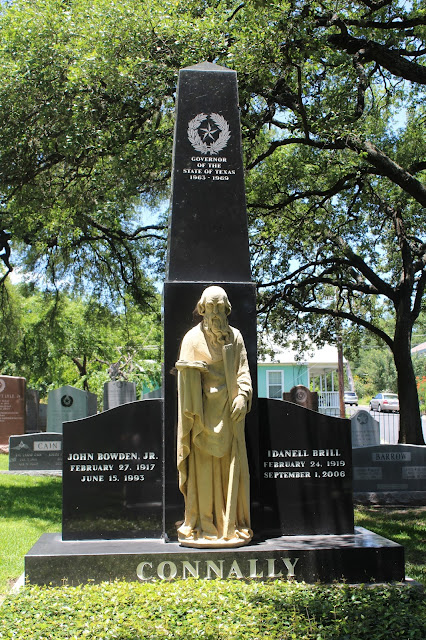 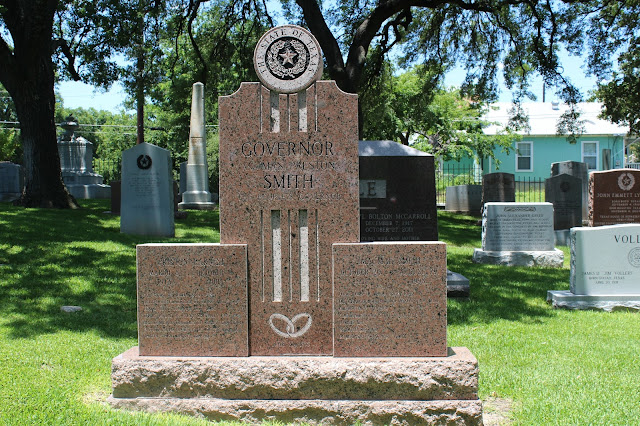 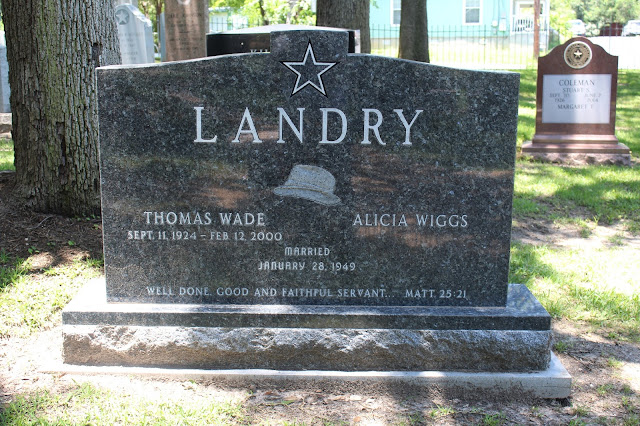 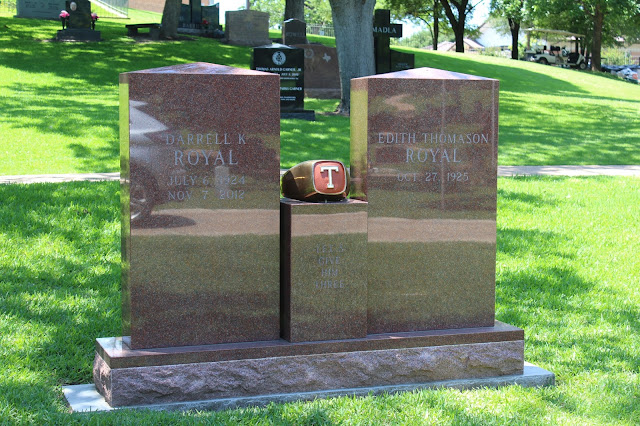 The Texas State Cemetery is a 22-acre Who's Who of the Lone Star past, and it is not to be missed.  For more information see www.cemetery.state.tx.us

On Thursday, August 4, I drove to Clarksville to address the Red River County Historical Society during its monthly meeting. Several years ago I served as program chair when the East Texas Historical Association held a spring meeting in historic Clarksville, where we were treated with warm hospitality. One of the friends I made during that experience was banker Jim Clark, who serves as Treasurer of the Red River Historical Society. Jim's roots in Clarksville go back several generations and his enthusiasm for local history is boundless.  A couple of months ago he called with an invitation to provide a program for the Red River County Historical Society. We quickly agreed that a program on Sam Houston would be appropriate, since Houston first entered Texas at a nearby crossing of the Red River.

I had not yet been appointed State Historian when I served as ETHA program chair in Clarksville. Since Clarksville had not been the subject of one of my blogs, I arrived in town on August 4 in time to take photos of several historic buildings. The 1897 Lennox House is a superb Victorian home built by a prominent family. Today it is operated by the Red River County Historical Society, which also has converted the castle-like 1889 county jail into a museum. I enjoyed walking through the restored 1885 courthouse. Downtown there are numerous Victorian commercial structures around the square.


The statuesque First Presbyterian Church was built in 1905. We used this fine old structure for an ETHA dinner and for programs. At the church on August 4 there was a board meeting at 5 in the afternoon, conducted by President Pam Bryant.


My program was scheduled for 6 o'clock. I parked at the church about 5:15, and Jim Clark came out to help me carry props into the auditorium. Jim told me that the Society had advertised the event, and as I greeted arrivals I met people from Texarkana to Paris. They all were history-minded kindred spirits, and many of the women were DRT members.

President Pam Bryant called the session to order, and I was introduced by Jim Clark. The large crowd was quite responsive to my Houston program, and afterward there was an extended Q and A period. 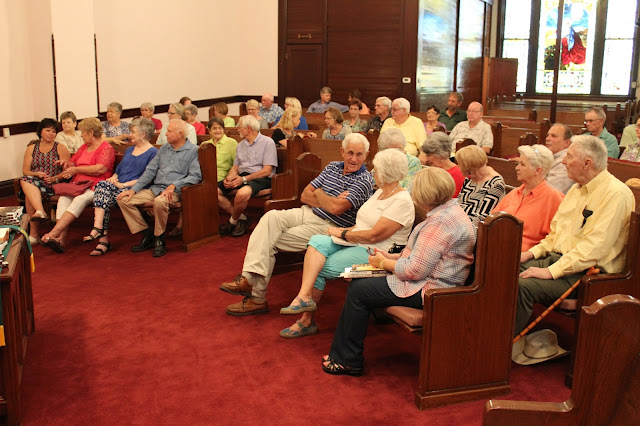 Later a long line formed to purchase inscribed copies of my Sam Houston biography, as well as my Texas Gunslingers book. Later that night the 140-mile drive home passed by quickly, as I called up one pleasant memory after another of my afternoon and evening in Clarksville. 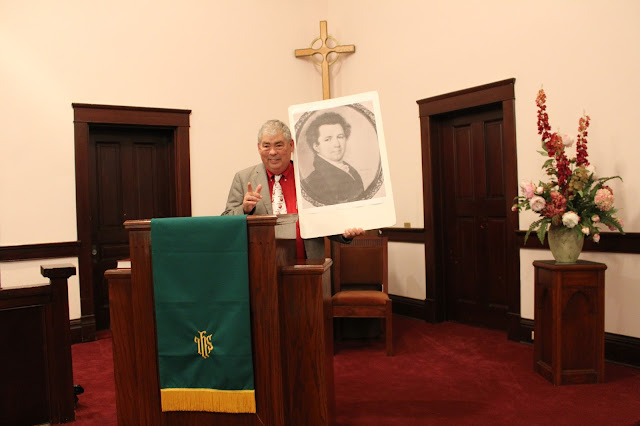 Posted by Unknown at 7:12 PM No comments:

On Tuesday, July 26, I began the day with an opening address at a Texas history teacher conference in Houston. That evening I delivered the keynote at the annual joint meeting of the Tyler chapters of the Sons of the Republic of Texas and the Sons of the American Revolution. By the time I returned home that night I had driven more than 300 miles, while delivering two Texas history programs. But both events were fine history occasions which produced a most enjoyable day for the State Historian.
On Monday afternoon I drove to Houston Aldine. Charles Nugent, Adult Program Manager for the Texas State Historical Association, had arranged a conference for Tuesday and Wednesday at a handsome new facility of the Aldine ISD. These conferences stress content over methodology, and offer needed professional development credit to participants, mostly fourth- and seventh-grade teachers of Texas history. For four years I've been privileged to provide programs at the TSHA conferences, and for this one Charles Nugent arranged an especially fine lineup of presenters.


I saw Charles on Monday afternoon at the Aldine ISD conference center. Before going to my motel, I wanted to check in with him and get a feel for the facility. My program was scheduled from 8:30 to 10 AM Tuesday, following a welcome by Charles Nugent. I arrived early to set up my props and to visit with participants. My program was an overview of "Spanish Influence Over Texas." The recorded history of Texas covers five centuries and Spain controlled Texas for the first three of those centuries. Spanish influence over Texas thus is deep and has proved long-lasting. It is a subject I lectured about for more than three decades to my Texas history classes at Panola College, and it was a pleasure to condense these lectures for the opening program at this conference.

I left for home at 10:30 AM and arrived three hours later, just a few minutes before my youngest daughter and her family drove up from their home at Van Alstyne. We visited for three hours before I changed suits (in order to wear my Sam Houston tie) and gathered a new set of props before heading to Tyler. Causby, Dusty and their two daughters began some planned activities, while I drove to a Tyler restaurant to meet with the Piney Woods Chapter of the SRT and the Captain William Barron Chapter of the SAR. These are two of the top chapters in Texas of their respective societies, and a number of men are members of both chapters.
For this annual dinner meeting of these two chapters, wives are invited, many of whom are members of the DRT and DAR. The spacious dining room was filled with a fine-looking crowd of lively and patriotic men and women. Following an excellent dinner there were impressive opening ceremonies, led by chapter presidents Sam Hopkins (SRT) and Dave McLeod (SAR). An award and commendation medal was presented to Fireman Matthew Daniel.

For this combined SRT/SAR meeting, I presented a program on Sam Houston. His father was a combat veteran of the American Revolution, serving as a young officer under Daniel Morgan. Young Sam absorbed Revolutionary values from his father, and during the Texas Revolution Houston fashioned his hat into the shape of a tricorn of the American Revolution. By a delicious historical coincidence, Houston signed the Texas Declaration of Independence on his 43rd birthday, March 2, 1836. I emphasized the drama of the campaign of the spring of 1836: the desperate "Runaway Scrape," General Houston's strategic retreat, and the spectacular victory at San Jacinto. The crowd responded with enthusiasm, and as I drove home afterward I reflected that this busy Tuesday was one of the most pleasant and rewarding days of my four-year tenure as State Historian.