The Eleventh Annual Roundup of the Wild West History Association was held on Wednesday, Thursday, Friday and Saturday, July 18-21, at the Oasis Hotel and Convention Center in Springfield, Missouri. The event was attended by more than 170 Western history enthusiasts, and the 2018 Roundup was one of the most enjoyable and successful gatherings in a series of enjoyable and successful Roundups. Indeed, two of our last three Roundups have been held in Texas, and more members are from Texas than from any other state.
Roy Young and Dennis Garstang assembled an excellent program, which included a terrific field trip, and the Oasis was one of the finest facilities we've ever had. On Wednesday evening we assembled for an opening reception. Roy and Dennis provided a preview of the next few days, and our keynote address was delivered by one of the most highly regarded writers in our field, Jack DeMattos. Following his remarks, Jack was presented a Six Shooter Award for Lifetime Contributions to Wild West History.
The Thursday morning program opened with a presentation by best-selling author Michael Wallis on the topic of his next book, "Belle Starr of Missouri." Michael was followed by Erik Wright of the Tombstone Epitaph, who spoke on "Blood in the Ozarks, The Largest Feud in Arkansas History." After a morning break I was up next with "Wild Bill Hickok, Prince of Pistoleers." One of the principal reasons we met in Springfield is because it was the site of one of the most famous street duels in Western history, Wild Bill vs. Davis Tutt in front of an expectant crowd of onlookers. I first wrote about Hickok in the 1970s, and I presented an overview of his colorful - and deadly - career, with emphasis on the confrontation with Tutt. I saved some of that material for the next morning, when we were scheduled to visit the duel site downtown.


At the Annual Awards Luncheon on Thursday, the Book of the Year Award was presented to Michael Wallis for his splendid, The Best Land Under Heaven: The Donner Party in the Age of Manifest Destiny. The final program of the afternoon was given by Mary Johnson, "Laura Ingalls Wilder and How the West Was Settled," a fascinating preparation for our upcoming field trip. Thursday evening John Bossenecker moderated a 90-minute panel on "The Earp Brothers," with panelists Casey Tefertiller, Roy Young Gary Roberts, and Tom Bicknell.


On Friday morning we boarded buses, heading first for the downtown square where Hickok and Tutt exchanged shots. I described the basic layout of the buildings and of the positions of the gunmen, adding remarks about dueling vs. the more common, spontaneous Western gunfights. We then were joined by John Sellars, a native of Springfield who is the Executive Secretary of The History Museum, which is located on the square, and he had a great deal to tell us about the famous duel. Later I had the pleasure of introducing John to three female descendants of Davis Tutt. The ladies came from long distances to meet with us in Springfield, and before the Roundup ended they joined our organization.
Next the buses transported us to Maple Park Cemetery and the graves of Davis Tutt and other Tutt family members. Doc Shores offered a description, and the trio of Tutt descendants were visibly moved at being in the presence of the gravesite of Davis. We had lunch at the Bass Pro Shop; the national headquarters of this organization is in Springfield. We enjoyed an excellent buffet meal, and we had time to visit the outstanding museum of the National Rifle Association, to which many of us belong.


Boarding our buses, we traveled east to Mansfield, where we toured the Laura Ingalls Wilder Home and Museum. We arrived just in time to hear a young woman play the violin of Pa Ingalls. The violinist delivered a delightful concert of folk tunes from the front porch of the house, and we learned that Pa's violin is brought out of the museum only on special occasions. The museum displayed a treasure trove of Ingalls-Wilder family artifacts, the gift shop offered an array of books and age-appropriate souvenirs, and there is an excellent eight-minute movie. Of course, the tour of the house, completely furnished and decorated with Ingalls-Wilder items, is the highlight of the visit.

Friday evening there was a session featuring cowboy poets, storytellers, and musicians. Roy Young coordinated this lively event.
Saturday morning began with a brief business meeting. Most officers and board members agreed to continue their service, and Michael Wallis accepted an open board position. The 2019 Roundup will be held in Cheyenne, Wyoming, and in 2020 we will meet in Fort Smith, Arkansas. There were several fine presentations during the morning, including back-to-back programs by a husband and wife research team, Pat and Chuck Parsons of Luling, Texas.

On Saturday evening we had our annual Boots and Spurs Banquet. Jim Dunham presented a President's Award to Kurt House, noted Texas gun collector and a strong supporter and board member of the WWHA. The Live and Silent Auctions raised a considerable amount of money for the organization.

Our entertainment for the evening was an all-time WWHA highlight. Roy Young secured the services of the legendary Sons of the Pioneers, and because I had written a book about the group Roy gave me the honor of providing the introduction. The Sons of the Pioneers were organized during the mid-1930s by Roy Rogers, Tim Spencer, and singer-composer Bob Nolan, along with two gifted instrumentalists from Texas, Hugh and Karl Farr (violin and guitar). Duiring the next two decades the Sons of the Pioneers appeared in 100 motion pictures, made countless public appearances, and established themselves as the top group in cowboys music with such timeless hits as Tumbling Tumbleweeds and Cool Water. For more than 80 years the Sons of the Pioneers have maintained their position as the leading cowboy music vocal and instrumental group in history, as they demonstrated to an enthralled WWHA audience. Dusty Rogers - Roy's son - was the lead singer, and the Sons of the Pioneers royally entertained us for 90 minutes. What a spectacular close to our 2018 Roundup.

The week began at the Colleyville Rotary Club. I was invited by a former student, Mark Bauer, who now makes his home in Colleyville. We agreed that the club members would enjoy a program on Texas Gunslingers, which involves 19th-century life and death conflict in the Lone Star State and a collection of replica weapons and gun rigs. A bonus for me is the fact that my daughter, Dr. Berri O'Neal Gormley - who is instrumental in putting together this blog every week or so - and her family live in Colleyville. I drove up a day early so that I could spend a little extra time with Berri, her husband Drew, and my three youngest grandchildren, Addison, Reagan, and Nolan. Berri also accompanied me to the lunch meeting of the local Rotary club, and we all had a lively time. 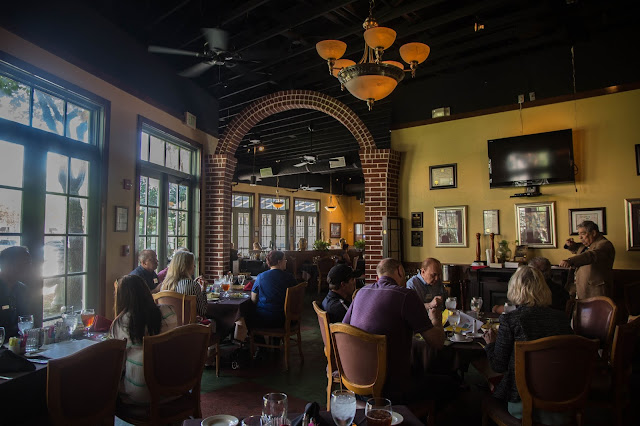 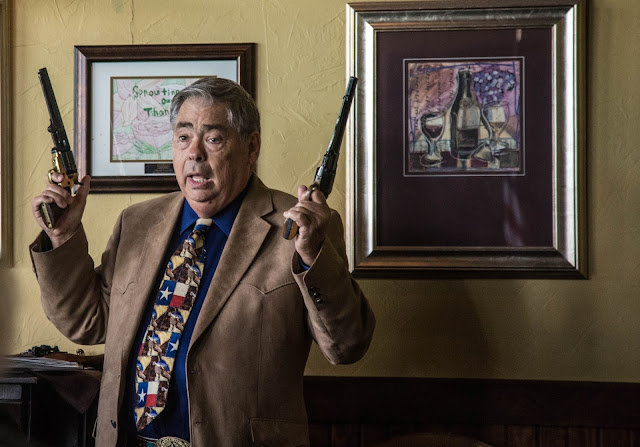 On Wednesday afternoon in Carthage, I was invited to the First Baptist Church, which was having a blood drive competition with a church in another community. FBC's Music Minister, David Yarborough, thought it might stimulate donor attendance to have several local authors on hand to sign books for those who came to donate blood. I had a fine time visiting with Carthage friends, eating homemade ice cream provided by the church, and signing books. I had just received the first box of copies of the UNT Press softcover reprint of my 2006 book about the Regulator-Moderator War: War in East Texas, Regulators vs. Moderators. It was the first time the book had been available in more than a decade, and I was delighted that so many readers wanted a signed copy.


On Saturday I drove to Athens for the annual meeting of the Awards Committee of the Otis Lock Foundation of the East Texas Historical Association.  I've been a member of this committee for a decade and a half, and I've served as chairman  for the past few years, since the passing of Archie McDonald. We determine cash awards for book award winners, research grant applicants, and educators of the year. We met at a Mexican food restaurant, and before we could even order lunch we found ourselves discussing the merits of various books that had been nominated. By the time we finished our meals we had made our decisions, which will be announced at the Fall Meeting of the ETHA at the Fredonia Hotel in Nacogdoches. Scott Sosebee, Executive Director of the ETHA, was on hand to lend advice, and aside from the committee chairman, a set of new members was present: Debbie Liles, Jessica Wranosky, and John Lundberg, accomplished authors all.


We concluded out business at two o'clock, and I immediately began driving toward Houston. I had agreed to speak at the annual Awards Banquet of the Sons of the Republic  of Texas, Lone Star Chapter #58, which serves Montgomery and The Woodlands. This award-winning group is an outstanding chapter and I've twice had the privilege of addressing them at past events. The banquet was held at a superb restaurant in North Houston, the Steamboat House, which is richly decorated in Texana and features an eye-catching statue of Sam Houston in the parking lot.

There were almost 100 men and women in the picturesque banquet hall. The impressive program included the tolling of a "Passing Bell" for members who had been lost during the year, as well as the presentation of $1,000 cash awards to Educators of the Year.  The recipients were two seventh-grade Texas History teachers from the Conroe ISD:  Penny Williams of York Jr. High, and Brenda Craig of Moreland Jr. High. I especially enjoyed hearing  a detailed recounting of the chapter's Year in Review and the miscellany of historic activities staged by the chapter.
﻿ ﻿

In the past I had spoken to this chapter on Sam Houston and on the San Jacinto Campaign, so we decided that for the Banquet topic I would describe the Regulator-Moderator War. This first of a great many blood feuds in Texas occurred in 1840-1844 during the heart of the Texas Republic era. It was a Texan embodiment of the American Regulator Moderator tradition that began in the 1760s and 1770s, and it produced more casualties than any other blood feud in Texas history. And by a happy coincidence a shipment of my books on this blood feud came in just a few days earlier, and I was able to provide autographed copies for the SRT members.  In all it was a wonderful evening, a fitting climax to a delightful week of Texas history events.