February is Black History Month, and a few weeks ago I was invited to speak to the Republican Women of Panola County. As Texas State Historian I felt that I should speak about elements of "Black History of Texas and Texans," and the program began to be advertised in newspapers and on the radio. Only a few days later I received a call from an old friend, retired journalist John Foster, who heads the Panola County Democrat Club. John had heard about my program for the Republican Women and he asked me to provide it for the Democrat Club a few days later. I was glad for the opportunity to use the program twice during Black History Month. 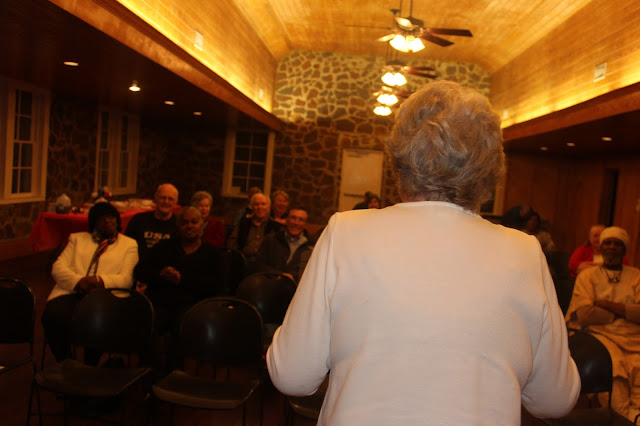 I joined the Republican Women in Carthage on Friday evening, February 17. The following Monday evening I met with the Democrat Club. Both groups provided abundant refreshments, and there were good friends among both crowds. On Monday Vik Varma from Kilgore was present to urge his fellow Democrats to attend an upcoming Affordable Care Act rally at the Gregg County courthouse in Longview, a rally in conjunction with similar ACA activities around the USA. 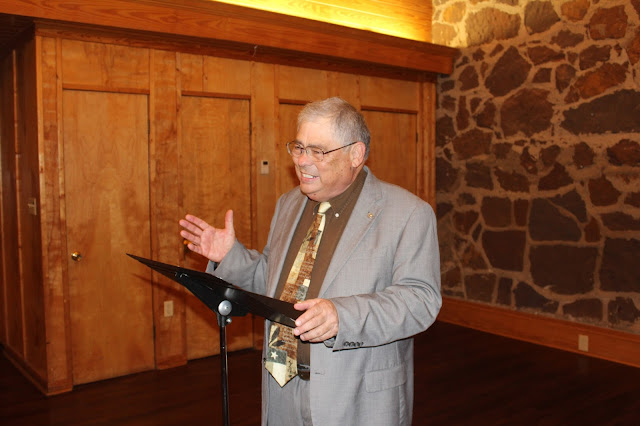 Regarding my program for Black History Month 2017, I lectured on Texas history for more than 30 years, and Black Texans provided colorful and significant elements of Lone Star history and culture. I explained how the southern cotton boom reached Texas in the 1820s, with an insatiable demand for slave labor. Indeed, from 1846-1861 Texas was the fastest-growing slave state in the Union.
﻿

I pointed out that during the Civil War a former slave from Panola County - Sgt. Major Milton Holland - became the only Texan to win the Medal of Honor (which, of course, was awarded to federal troops, not to Texas Confederates). After the Civil War, when the U.S. Army was reduced to 10 cavalry regiments and 25 infantry regiments, the 9th and 10th cavalry regiments and the 24th and 25th infantry regiments were black "Buffalo soldier" units. All four black regiments were on duty a great deal in frontier Texas, and while stationed at Fort McKavett  Sgt. Emanuel Stance of the 9th Cavalry became the first black soldier to win the Medal of Honor after the Civil War. 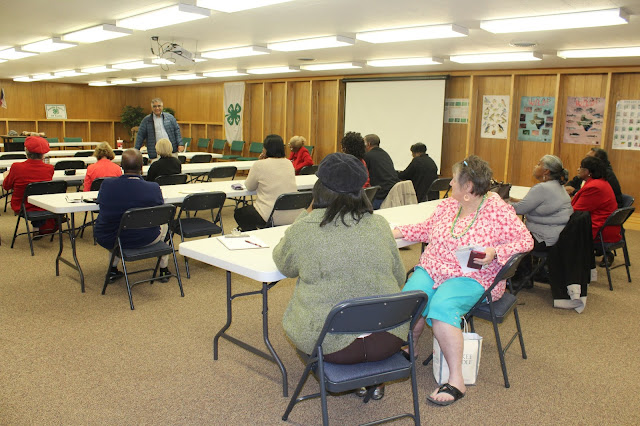 During that same period Bill Pickett of Taylor was drawn to cowboy life and he became the a Wild West show and rodeo star. Pickett was the first black cowboy inducted into the Rodeo Hall of Fame, and the only performer known to have introduced a rodeo event - "Bulldogging." Culturally, Scott Joplin of Texarkana was instrumental in popularizing a lively new type of syncopated music - "ragged time" - and he became the leading composer of Ragtime. 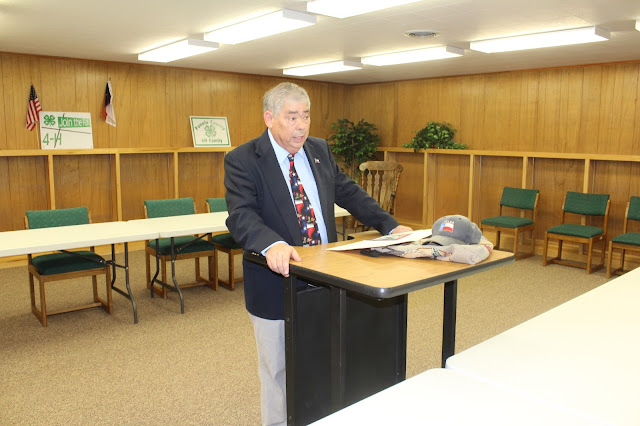 
Of special interest to me is Doris Miller of Waco. Stationed aboard the USS West Virginia on December 7, 1941, Miller performed heroically as the battleship was sinking beneath him. Miller became the first black sailor to be awarded the Navy Cross, and the medal was presented to him by another notable Texan, Admiral Chester Nimitz of Fredericksburg. I was privileged to write a short biography of Miller at the request of Eakin Press, when their operations were based in Waco.
Posted by Unknown at 7:43 PM 2 comments:


Following a lunch break we assembled again at the Marshall Visual Arts Center.  A great many well-published historians were attendees, along with four San Jacinto College students brought by Eddie Weller. Eddie has been a San Jacinto Webb Society advisor since 1989, and he regularly escorts history students to ETHA and to TSHA meetings. 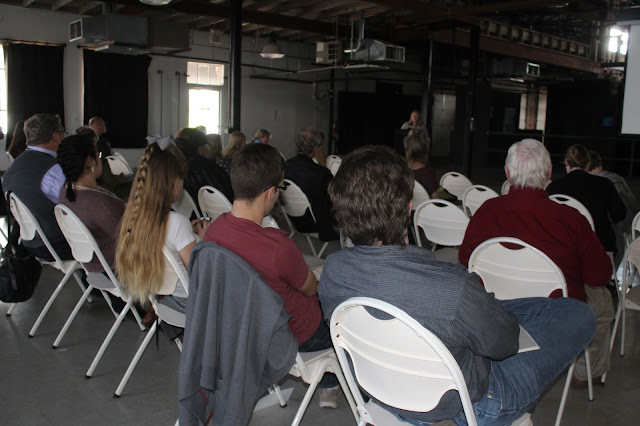 Barbara Judkins, site manager for the Starr Family Home State Historic Site, offered a PowerPoint presentation, "They Don't Build Them Like They Used To." Dr. James Starr, a prominent figure in the Republic of Texas, along with his son Frank, established the first bank in Marshall in 1870 and acquired 52 acres on the southwest outskirts of town for a family home complex. The centerpiece of the Starr family complex was - and is - Maplecroft, a two-and-one-half-story frame house built by Frank and his wife Clara in 1871. At Maplecroft Frank and Clara Starr raised six daughters (four other children died young). A tall cistern tower at the rear of the home provided water for the household. One of the buildings, a single-story frame structure, was used as a school, with the Starrs employing a series of well-educated tutors for their children. The six Starr daughters married and most of the couples made their homes at the family complex.


Eventually the site was donated to the state of Texas and was opened to the public in 1986. By that time I was teaching night classes in Marshall for Panola College, and one evening each semester I arranged a field trip to the Starr Home. The furnishings and decorations at Maplecroft are original, and restoration work is conducted regularly.


After Barbara Judkins concluded her PowerPoint, our ETHA group was invited to tour the Starr Family Home Site, about one mile away. I had not been to Maplecroft in years, and eagerly joined the tour. It was a most enjoyable climax to a fine day with ETHA friends.
Posted by Unknown at 7:32 PM No comments:

Representing Texas at the Border Queen

I've recently been invited to represent Texas at the 150th anniversary of the founding of Caldwell, Kansas, on the first weekend in May. Caldwell began in 1867 as a wild trail town on the Chisholm Trail, before later becoming the last railhead on the most famous of all cattle trails. The ramshackle community grew up just above the Kansas-Oklahoma border. Caldwell was the first town the Texas trail drives reached after crossing through Oklahoma. With liquor outlawed in Indian Territory, Caldwell offered drinking, gambling, and sporting women - along with brawls and gunplay. Longhorn herds were driven through early Caldwell north into Kansas heading toward Abilene, the first railhead on the Chisholm Trail. Five years later a railroad began construction to the south, toward Texas and the advancing trail herds. For one season Newton prospered as the Chisholm Trail railhead, before the rails reached Wichita. But by 1880 Kansas farmers succeeded in protecting their livestock with a quarantine law which blocked Texas longhorns from crossing Kansas lands. The hardy longhorns carried ticks which infected farm animals with a deadly blood disease, "tick fever" or "Texas fever." 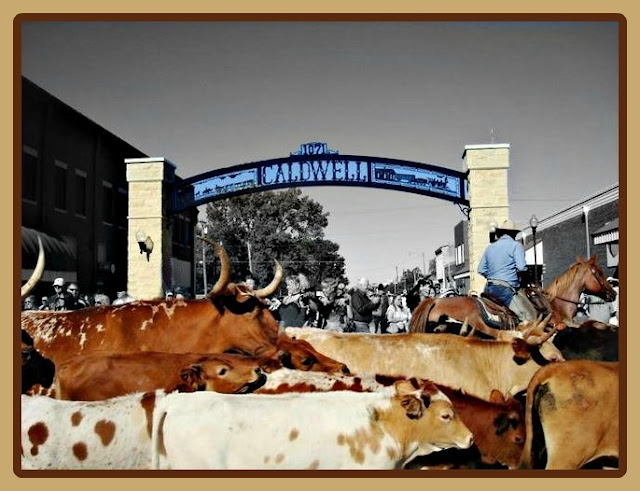 But rather than close the lucrative Chisholm Trail, the railroad was extended 52 miles from Wichita to Caldwell. Stockyards were built on the south edge of town, and herds were driven through the gates into the yards, then loaded directly onto cattle cars. During the railhead years Caldwell became known as the "Border Queen," boasting two three-story brick hotels, a superb opera house, and three blocks of saloons and substantial commercial buildings. Indeed, the Border Queen was a more impressive town during its heyday than Abilene, Wichita, Dodge City, or any other frontier railhead. 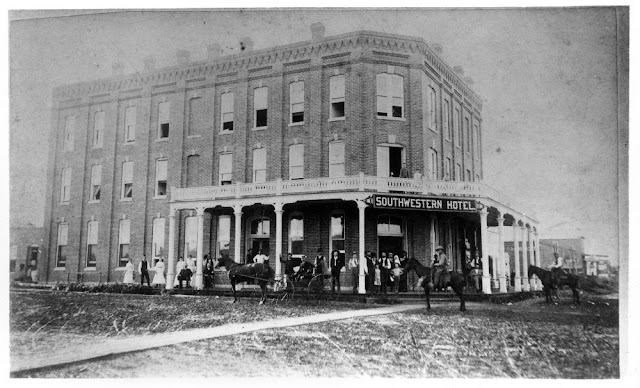 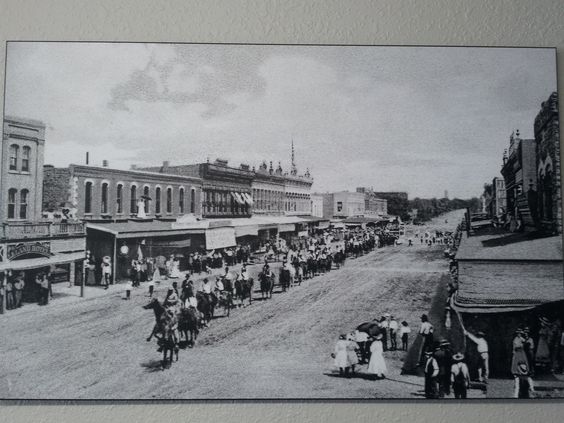 But the gunplay continued, and Caldwell was the scene of more shootouts than any other western cattle town. A final frontier adventure came in 1889 and again in 1893, when the Border Queen was the launch site for the spectacular land rushes into newly-opened Oklahoma farm lands. Thereafter Caldwell settled into a quieter existence as a farm town, but a number of 19th century buildings stand as reminders of the Border Queen. There is an excellent museum, gunfight victims reside in the old cemetery, and historical markers are all over town.


I first visited Caldwell in 1968, while exploring each of the Kansas cattle towns. One of my early books was a biography of Henry Brown, Caldwell's two-gun marshal who turned outlaw after taming the raucous Border Queen, and I wrote articles about Caldwell for western magazines. I built a scale model of Caldwell during the 1880s and donated it to the Border Queen Museum, where it remains on display. In 2008 Eakin Press released my book about frontier Caldwell: Border Queen Caldwell, Toughest Town on the Chisholm Trail. During the publication activities, I was given a key to the city mounted on a piece of timber from the old opera house and I was designated "Border Queen Laureate of Letters." 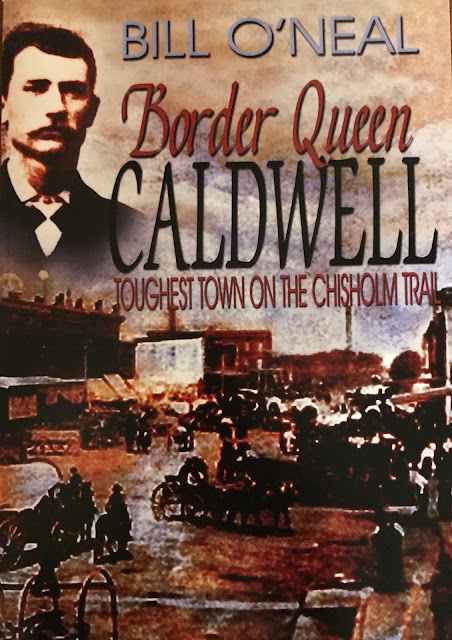 During my research efforts I was greatly aided by local historians Karen Sturm and Rod Cook. (Sadly, Rod passed away last week.) Karen is a dynamic community leader who skillfully spearheads heritage celebrations, and her plans for the Border Queen at 150 are exciting. She has invited various political dignitaries from Kansas and Oklahoma, and for a representative from Texas she asked the State Historian to come. I will be representing the Texas drovers of the 1860s-1870s-1880s (one was my great-grandfather, Jess Standard, who trailed cattle to Caldwell from Lampasas County), and I look forward to providing a program during the anniversary festivities in May.


A related appearance will be a public address at the Longview University Center at 6:30 on the evening of March 21. Dr. Van Patterson was appointed director of the LUC at about the time I received my appointment as Texas State Historian. He invited me to offer a public address at the Longview University Center, and with Van providing excellent publicity, we drew a fine crowd. The State Historian lecture has become an annual event in the years since 2013, and this year's topic will be "Texas Cowboys, Longhorns, Ranches, and Trail Drives." The public is welcome without charge.

Posted by Unknown at 7:12 PM No comments: