The State DRT Convention and More

On Friday evening, May 18, it was my privilege to present the banquet address for the 2018 annual meeting of the Daughters of the Republic of Texas. The three-day DRT Convention was held at the Dallas/Addison Marriott Quorum by the Galleria. A few years ago I delivered the keynote address when the statewide DRT Convention was held in Killeen, and during my tenure as Texas State Historian I have presented programs to numerous DRT chapters. So it was a special pleasure to participate in the 127th Annual Convention of the DRT.
﻿
The program chair for this 2018 Convention was a longtime friend and Panola College colleague, Liz Hedges. She asked me to provide a light-hearted program, and we decided on "Musical Traditions of Texas," which has been received through the years with laughter and interest by numerous audiences, especially those that are predominantly female. I arrived at mid-afternoon, and immediately encountered friends and acquaintances from other DRT meetings. More than 500 members were in attendance. There are 7,000 DRT members. Next year's meeting will be in Austin.


﻿﻿ I was delighted to see Amber Friday Brown, whom I first met as a freshman student in a US History class at Panola. I quickly learned that Amber was an enthusiastic Civil War re-enactor, and when I had her bring her antebellum clothing to class, I also learned that she was a talented presenter. During her two years at Panola I helped arrange appearances for her with Sons of Confederate Veteran groups. She spent her summers working at a Civil War coastal fort in North Carolina. Amber earned bachelors and masters degrees in Arkansas, where she and her husband - also a re-enactor - live and work. A transplanted Texan, Amber enlisted the assistance of the Texas State Historian in establishing an Arkansas chapter of the DRT with other native Texan ladies. Amber also leads the United Daughters of the Confederacy organization in Arkansas. It was a great pleasure to visit and catch up with this good friend and accomplished historian. 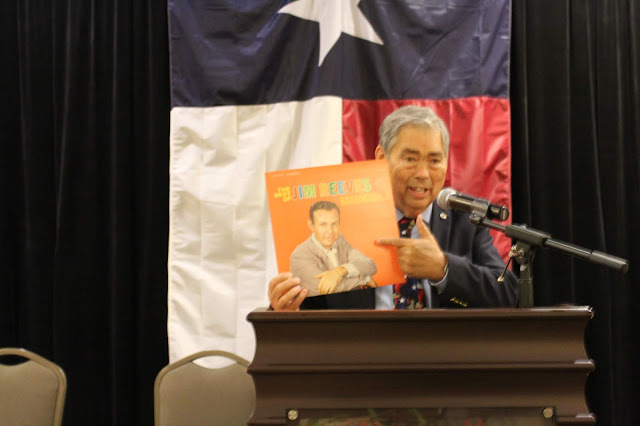 Two days before driving to Dallas for the DRT Convention, I received from the University of North Texas Press the new cover for the reprint of my 2006 book, War in East Texas, Regulators vs. Moderators. This history of the murderous Regulator-Moderator War was the first title in the Bob and Doris Bowman East Texas History Series. The book proved quite popular - I signed 200 copies in two hours in Shelbyville, the village which was the center of conflict. But when the first hardcopy printing sold out, circumstances prevented a second edition. The book was co-sponsored by the Bowmans and the East Texas Historical Association. Sadly, both Bob and Doris passed away during recent years, but ETHA Executive Director Scott Sosebee has been instrumental in arranging a softcover reprint through the UNT Press. 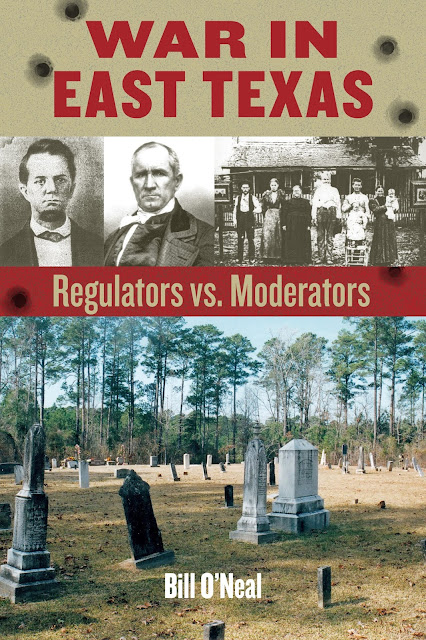 The Director of UNT Press, Ron Chrisman, has focused on feud books and outlaw/lawman titles. Indeed, he published my book on The Johnson-Sims Feud of 1916-1918, the last old-fashioned blood feud in Texas. The Lone Star State was the site of more blood feuds than any other state or territory, and the first of these conflicts was the Regulator-Moderator War of the 1840s. Ron felt strongly that War in East Texas was a suitable entry for UNT Press, and his tireless efforts with the original publishers have placed the book back in print this summer for the first time in more than a decade. I am grateful to Ron and Scott, and I look forward to presenting programs again on the Regulator-Moderator War.

Posted by Unknown at 7:41 AM No comments:

The State Historian enjoyed an action-packed 24 hours on Thursday and Friday, April 26-27. Shortly after returning home from two weeks of travel, I delivered a program on Thursday at noon to the Carthage Lions Club on the Panola College campus. It was a pleasure to be among home town friends, and they responded favorably to my presentation on a fellow East Texan, John Chisum of Paris to our north, who went on to become a famous cattle king of western ranching. 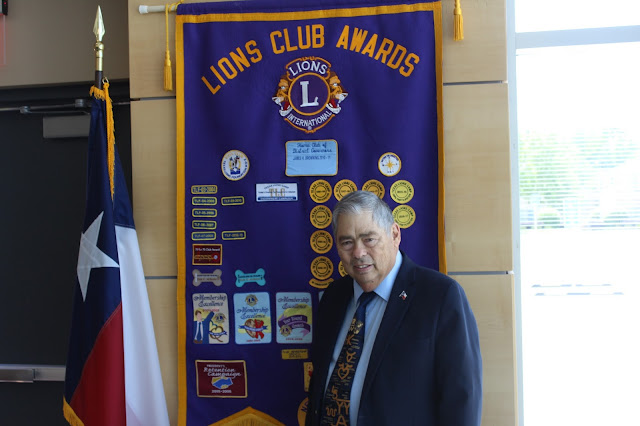 Thursday evening I attended a meeting at a Carthage restaurant of the Gen. Horace Randal Camp of the Sons of Confederate Veterans. We sang Dixie, recited the pledge to Old Glory, the Lone Star Flag, and the Confederate Flag, and announced the names of our CSA ancestors - in my case Leroy O'Neal of Georgia, George Washington Owen of Mississippi, and James Standard of Alabama. My three great-grandfathers were teenagers who fought late in the Civil War to defend their homes from invading armies.


From my new book, Frontier Forts of Texas, I discussed the pre-Civil War military activities in Texas of such future Civil War heroes as Col. Albert Sidney Johnston, Lt. Col. Robert E. Lee, Maj. James Longstreet, Lt. George Picket, Lt. John Bell Hood, and other ambitious officers. Texas was a combat zone, with US Army troops operating out of nearly three dozen outposts against warriors  of the Wild Tribes, Comanches and Kiowas. Jefferson Davis, a West Point graduate and wounded veteran of the War with Mexico, served as an innovative and resourceful Secretary of War from 1853-57. Secretary Davis organized the Second Cavalry, with Col. Albert Sidney Johnston in command, to combat the horseback warriors of the Wild Tribes. Davis also imported camels as pack animals in the arid Southwest, and he armed infantry regiments with rifles instead of muskets. After the Civil War frontier combat continued in Texas, led by Civil War hero Col. Ranald Mackenzie and his crack Fourth Cavalry, operating out of reconstructed or new forts in West Texas.


﻿ ﻿ During Friday afternoon and on Saturday morning, sessions continued for nearly 100 attendees. The CTHA is entering only its third year and is growing rapidly. One of the most delightful sessions was on Friday morning: Frozen in Time, Ice Hockey in the Lone Star State. Armed with hockey sticks and displaying an array of hockey jerseys, Michael Miller of the Austin History Center and Charles Swanlund  of Blinn College-Bryan spoke respectively on "The Puck Stopped Here: San Antonio and the Birth of Ice Hockey in Texas" and "Mr. Hockey Comes to Texas: Gordie Howe and the Houston Aeros." This innovative session featured perhaps the first studies of ice hockey presented at a Texas historical conference.
Prior to attending the CTHA Conference, and immediately following the 2018 Conference of the West Texas Historical Association in San Angelo, I flew from DFW to Oregon for an 8-day cruise of the Columbia and Snake Rivers aboard the American Empress. We sailed first to the mouth of the Columbia, viewing the Pacific Ocean and visiting Fort Clatsop, where the Lewis and Clark Expedition spent the winter of 1805-1806 at the western extent of their historic journey. As we moved upriver we viewed sites where Lewis and Clark camped both coming and going. There were other Lewis and Clark sites, as well as the Nez Perce National Park and the Sacajawea State Park. At the Western Aeroplane and Automotive Museum I took a ride in a 1914 Ford Depot Hack. The scenery was magnificent, including towering river bluffs and splendid waterfalls. The State Historian of Texas had a grand time exploring the Pacific Northwest from a riverboat. 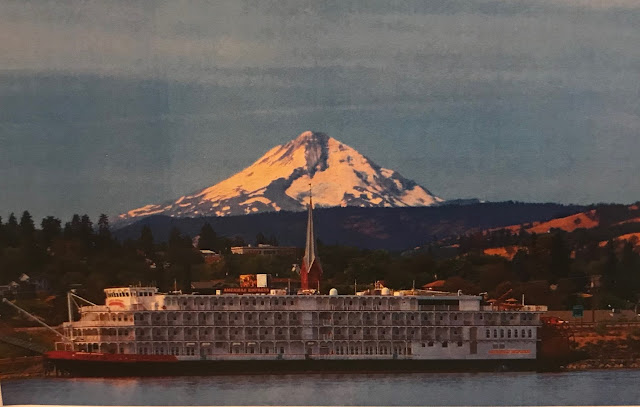 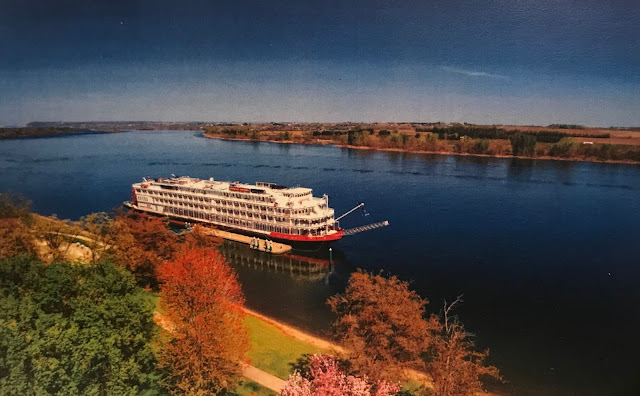 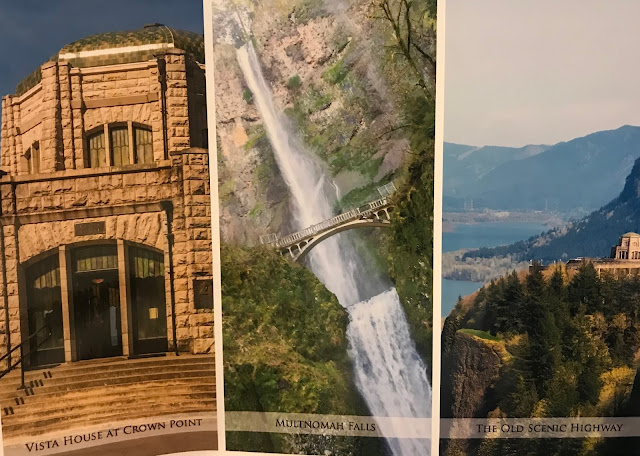 Posted by Unknown at 2:08 PM No comments: