For the past several months I've been developing a book on Billy Dixon - hero of Adobe Walls and Medal of Honor winner - and his remarkable wife, Olive King Dixon.


I've assembled books and a collection of documents, and I've been greatly aided by Panola College librarians Sherri Baker and Shay Joines, as well as by my sister and brother-in-law, Judy and John Smith of Lampasas. I've even been able to do a little writing, but I've reached the point where I could proceed no farther without a research trip to the Texas Panhandle.


On Monday morning, June 11, I toured Frontier Texas in Abilene, obtaining some useful photos and signing copies of my recent book, Frontier Forts of Texas. Museum Manager Rebecca Kinnison was most helpful, and she expressed interest in a program/signing when the Dixon book comes out. Before leaving Abilene I stopped by the Texas Star Trading Company, owned by Glenn and Carol Dromgoole, who are most supportive of Texana books and writers and who asked me to sign several titles on their shelves.


On Monday afternoon I was in the Scurry County Museum in Snyder, where I was welcomed by staff members Ericka Jayne, Laurel Lamb, and Brenda Tovar. Curator Laurel Lamb brought me into the basement so that I could examine rifles and other artifacts not on display. Program Scheduler Ericka Jayne urged me to return for a program/signing, and before I left town I photographed the famous albino buffalo statue on the courthouse square.

The next morning I was at the Southwest Collection on the campus of Texas Tech University. Archivist Monte Monroe had arranged for an impressive collection of documents to be placed at my disposal in the reading room, and I worked until mid-afternoon on this treasure trove of sources. I enjoyed a delightful lunch break with Monte, Tai Kreidler, and Lynn Whitfield, all friends from past visits and from activities of the West Texas Historical Association. Tai graciously contacted several other people at various museums on my behalf, letting them know when I was coming and what my research needs were.

After leaving the Southwest Collection I drove to Canyon, introducing myself to Warren Stricker, Director of the Research Center of the Panhandle-Plains Museum and his lovely assistant Millie Vanover. Although the Research Center usually is not open to the public until one o'clock in the afternoon, Warren generously invited me to come in the next morning. After our meeting I had time to examine the Billy Dixon display in the museum, along with other pertinent exhibits. The next morning I was greeted by Warren and Millie - and an impressive collection of boxes and file folders. I worked until mid-afternoon, and came away with a splendid load of photocopies and photograph orders.


Within 20 minutes I was in Amarillo, where Olive Dixon spent the last three decades of her life, working as a journalist and as an historian of the Panhandle's pioneer period. First I located her grave at Llano Cemetery. Next I found and photographed her last home, near downtown Amarillo. The nearby Downtown Public Library remained open until nine o'clock, so I went to the reference section and found several useful file folders, which provided more helpful photocopies. The following morning, Thursday, I photographed the impressive Polk Street Methodist Church, which Olive joined after moving to Amarillo and shortly after the big new sanctuary opened. In the main office I was welcomed by Natalie Chappell, Financial Secretary, and by Administrative Assistant Carol Moreno. They found Olive's 88-year-old membership card on a venerable rolodex, then located more information from an old church directory.


Late in the morning I drove to Fritch to photograph the Billy Dixon Masonic Lodge. A short drive then led me to Borger and the Hutchinson County Museum. Hutchinson County was the site of the Battle of Adobe Walls. Billy Dixon later made his home at Adobe Walls, held several public offices in the county, and took Olive as his bride there. I was expected at the museum by Administrator Lynn Hopkins, who graciously showed me through the excellent displays and made available to me numerous resources, including a recording of an interview by Olive. I had read transcripts of several of her interviews, but it was the first time I had heard her voice.
﻿

From Borger I went up the highway to Miami, seat of Roberts County. Olive lived for more than a decade in Miami, where most of her children went to school. The current Methodist Church was built while she was a member, and the handsome courthouse was only a few years old when she moved with her family to Miami. I was shown through the courthouse by County Judge Rick Tennant, and at the Roberts County Museum I met Curator Emma Bowers. The museum is housed in the old depot, and Emma is justly proud of the dioramas and other displays, as well as historic outdoor structures. She made available to me several photo sources, which I badly needed.

I ended the day by finding the monument at the remote site of the 1874 Battle of the Buffalo Wallow. Shortly after his heroics at Adobe Walls, Billy Dixon was recruited as an army scout. Soon thereafter Dixon, a second scout, and four troopers were jumped by 125 horseback warriors. One soldier died and and everyone else was wounded, but the large war party was repulsed, and Dixon and the other four survivors were awarded the Medal of Honor (Billy's medal is on display at the Panhandle-Plains Museum). Scout Dixon operated for several years out of Fort Elliott near Mobeetie.

I spent Thursday night in Canadian, where young Olive King arrived in the Panhandle from Virginia by rail to visit her cowboy brother. With a few phone calls I made an appointment with Weldon Walser, a native of Canadian, to tour the site of Fort Elliott, which is on property that Weldon owns and farms. We met on Friday morning, and Weldon graciously spent two hours driving me from point to point, collecting old square nails, and showing me photos of the post during its military heyday. I am deeply grateful to Weldon for taking time from a busy day to show a stranger this historic site.

A short distance away is the Mobeetie Museum, housed in the former elementary school built in 1923. When the school building finally fell into disuse, there was considerable damage the floor and roof, but a $500,000 grant provided an excellent renovation of the six classrooms and large auditorium. Today there is use by community groups and, of course, a first-rate museum, operated by Ada Lester and Suzanne Lohberger. Ada, a native of Mobeetie, served as my intermediary with Weldon Walser, and she and Suzanne assembled a wealth of file material on the Dixons, Fort Elliott, and the nearby battle of the Buffalo Wallow. Following a guided tour of the museum, I spent more than two hours photocopying materials. Ada and Suzanne were delightful company, and we talked - as I had at virtually every stop - of a future book signing and program. 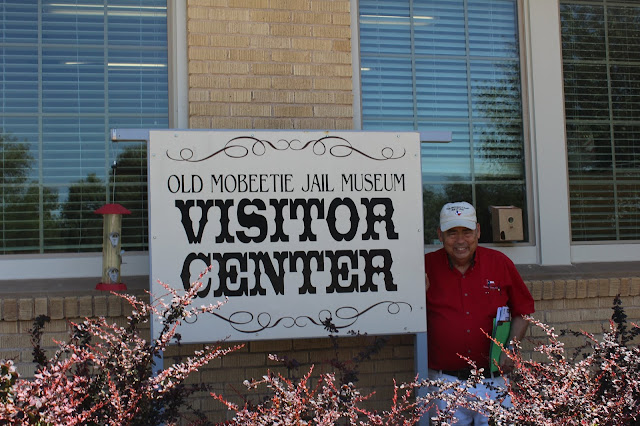 When I finally headed east toward Carthage - arriving at one o'clock Saturday morning - I reflected throughout the trip home on the rich collection of research materials I was bringing back to my writing office, and on the numerous friends and professionals who treated me with such courtesy during my highly productive week in the Panhandle.
Posted by Unknown at 11:04 AM 1 comment:

Historic architecture is our most tangible link with the past, and Ladonia in southeastern Fannin County is rich in vintage structures. The farm community began to form in the early 1840s. The first merchant was Frank McCown, and the little town was known as McCownville for several years. But about 1857 La Donna Millsay passed through town on a wagon train from Tennessee, and she enthralled the population with her singing. Citizens began to call the town "La Donna," and when a U.S. Post Office was established in 1858 the misspelled name "Ladonia" was submitted.

Located in a fertile farming area, Ladonia incorporated in 1885 with a population of 350, two cotton gins, a bank, a school, and several churches. Two years later, enticed by a bonus from Ladonia, the Gulf, Colorado, and Santa Fe Railway built tracks through town. Ladonia immediately boomed as a shipping point for cotton, corn, oats, and wheat. Within a decade the population soared to 2,000 with 100 businesses. 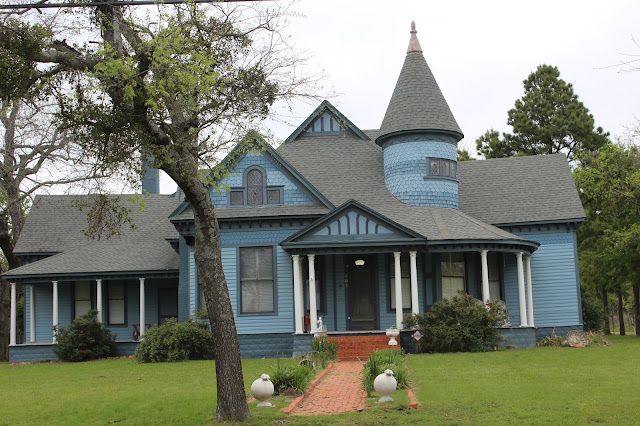 Ladonia's commercial district clustered around a large town square, and today a number of brick buildings still exist from the 1890s. A three-story city hall with a large upstairs auditorium dominated the square until it was razed in 1955. Victorian houses were erected around town, and many still stand, although some are in disrepair. Indeed, like many other agricultural communities Ladonia was hit hard by the Great Depression. The population declined steadily, and today the reported population is 612, barely one-fourth of the total of Ladonia in its prime.


But this very decline meant that the existing commercial and residential structures - and churches - continued to be used, and today offer a visual treat for history buffs. In 1893, for example, the First Baptist Church built an impressive frame Victorian sanctuary with a massive steeple tower. But this edifice burned in 1911, and a brick replacement opened in 1912 and still is used by the congregation.


Presbyterians organized a congregation in 1850, and in 1910-12 a magnificent church was built for $6,400. The building featured 18 stained glass windows, and a pipe organ was installed for $2,587. Unfortunately, the shrinking congregation dissolved in 1976, but the building was converted to "Heritage Hall," and the organ went to the First Presbyterian Church of Mesquite. In 1992 a ferocious storm damaged many of the beautiful windows.


During the same period that the Baptists and Presbyterians were erecting new brick edifices, the First Methodist Church built a large sanctuary for $10,000. This excellent church served the congregation for a century, but fell into disrepair in recent years. The Methodists, reduced in numbers, built a smaller, more modern building next-door to the still-impressive  structure from 1910.

The First Christian Church organized in 1865 and built a superb brick sanctuary in 1906. Attendance on Sundays averaged 300, but this church was destroyed by fire early in 1917. The church rebuilt immediately, but in time, like the Presbyterians, the congregation disbanded, and the big church stands empty today.

A number of downtown commercial buildings are still in use, and there is a modern school plant. But the history buff who enjoys studying antique structures will be rewarded by a visit to Ladonia.