On Texas Independence Day the Charles G. Davenport Chapter of the Daughters of the Republic of Texas held its monthly meeting at Traditions Restaurant in Tyler. The ladies invited their SRT counterparts, the Piney Woods Chapter, to share their Texas Independence Day meeting  For this combined DRT/SRT session they decided to invite the Texas State Historian to provide a program on the Alamo.


I was delighted at the opportunity to participate in such a special March occasion. I had met with each of these chapters at past meetings, including a joint session at Traditions Restaurant within the past year. So when I arrived in Tyler on March 2 I was greeted by several old friends, including chapter presidents Johnnie McWilliams and Sam Hopkins, and my benefactor Mary Frances Payne Murphy. David Hanover, who served as President General of the SRT from 2012-2014, brought several flags of the Texas Revolution, as well as framed facsimile copies of the Texas Declaration of Independence and of William Barrett Travis's letter of appeal from the Alamo. During my program he graciously helped display these items as they were needed.


Debbie Crenshaw, DRT Chaplain, offered the invocation (along with the benediction at meeting's end). After pledging allegiance to the United States and Lone Star flags, we followed song leader Betty Stokes in enthusiastic renditions of "Deep in the Heart of Texas" (I was better at clapping than at singing) and "Texas Our Texas."


I was introduced by Johnnie McWilliams. In addition to David Hanover's excellent props, I had brought several items of my own, so the program was well-illustrated. I'm always excited about talking to an audience (or a class) about the Alamo, and my enthusiasm usually is obvious for this dramatic, iconic Texas story.
﻿ ﻿


A little over two weeks later, on March 21, I drove to Center for a meeting of the Shelby County Historical Society. I've visited with this dedicated group of history buffs on numerous occasions, and I was highly pleased when they requested a program on the Alamo. I packed my props, eager as always to present this memorable Texas story. There had been newspaper and radio publicity, and there was a good crowd which included former students of mine at Panola College. And this time they would enjoy my lecture without having to take notes! ﻿﻿﻿﻿﻿﻿ 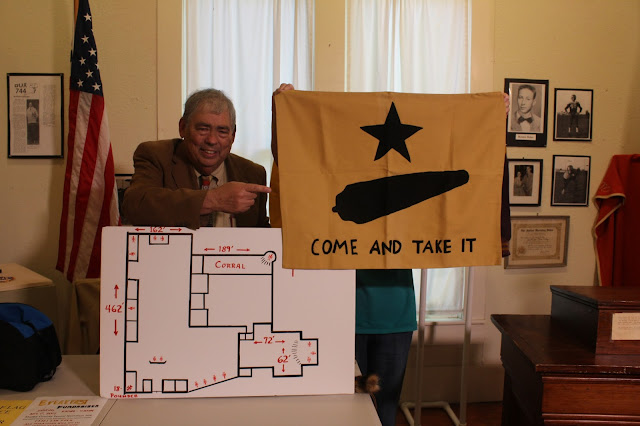 Following the two o'clock program I drove to Carthage, changed into cowboy clothes and loaded a new set of props. I drove to the Longview University Center for my second presentation of the day, an early evening public lecture on Texas Cowboys, Trail Drives, Great Ranches, and Range Wars. What a treat for me - two different iconic Texas stories in one day.

Posted by Unknown at 1:55 PM No comments:

The World War II WASPs (Women's Airforce Service Pilots) played a unique wartime role in Texas. Avenger Field at Sweetwater was the only all-female training base in the United States during World War II. Although the WASPs flew as an auxiliary outfit that had no official military connection, more than 25,000 women pilots applied, and 1,074 were accepted as cadets and graduated.


WASP recruits had to pay their own way to Avenger Field, and at first there were no uniforms or even cot mattresses. But these brave young women overcame all obstacles and flew more than 60 million miles in every type of U.S. plane - trainers, fighters, bombers, and transport craft. WASPs ferried planes across long distances, tested experimental and repaired aircraft, towed targets for ground-to-air and air-to-air gunnery practice, and accompanied cadet pilots in the air. Thirty-eight WASP pilots were killed while flying for their country.


Every semester at Panola College I lectured about the WASPs and Avenger Field in my Texas history classes, and through the years I've stopped on several occasions at the West Texas training field, which now is a WASP museum. My daughter, Dr. Shellie O'Neal, is chair of the drama department at Navarro College, and she has written, directed, and produced more than 20 of her own plays. By 2012 Shellie had become interested in the WASPs and Avenger Field, and she began to envision all manner of dramatic possibilities. Shellie attended a WASP reunion in Sweetwater. She became personally acquainted with 16 former WASPs and she interviewed 12 of these lively ladies. 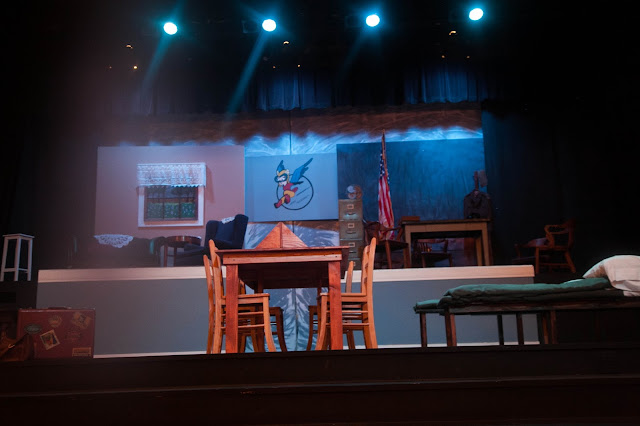 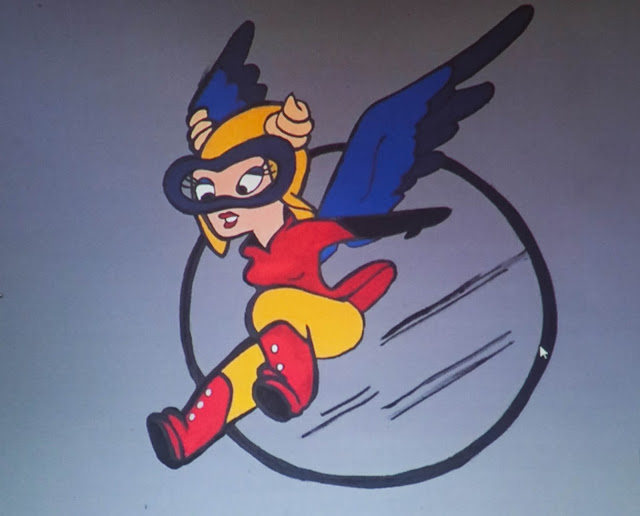 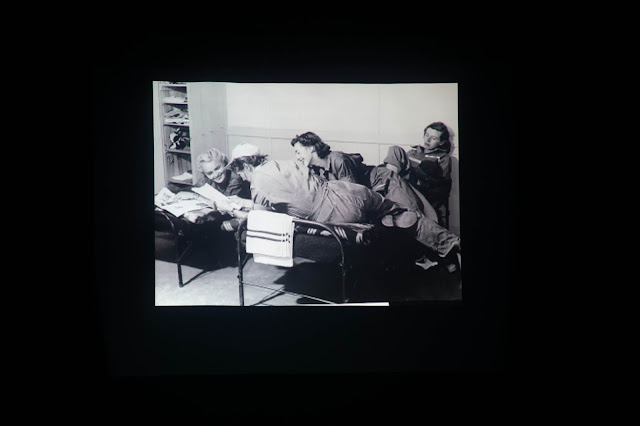 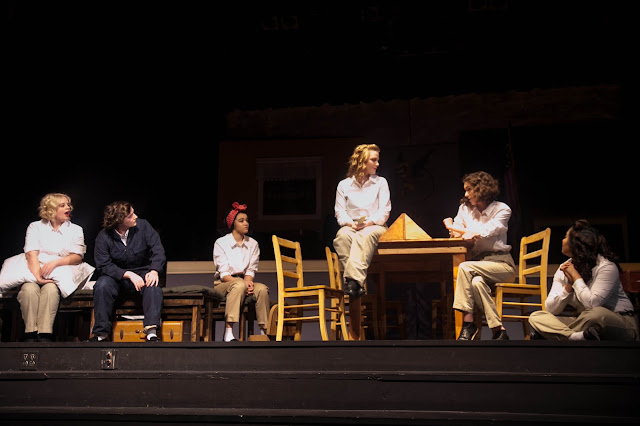 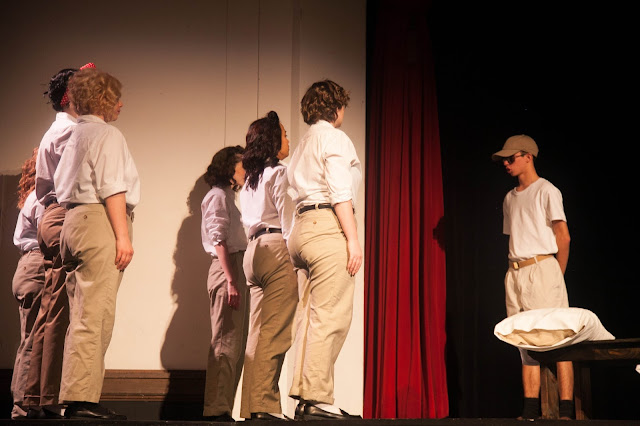 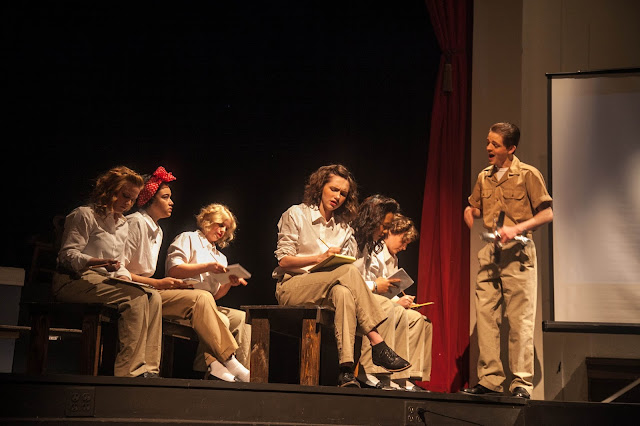 Shellie researched deeply at the WASP museum, at Texas Woman's University, and through other venues. She created a play, The Forgotten Air Force, that incorporated a majority of the experiences and problems, large and small, of the WASPs at Avenger Field. The Forgotten Air Force ran at Navarro College on Thursday-Friday-Saturday-Sunday, February 23-26. My family gathered in Corsicana for the Saturday matinee. All three of Shellie's sisters were there, as well as all seven of her nieces and nephew (of course, I enjoyed being with all four daughters, all of my grandchildren, my sister and brother and other family members). 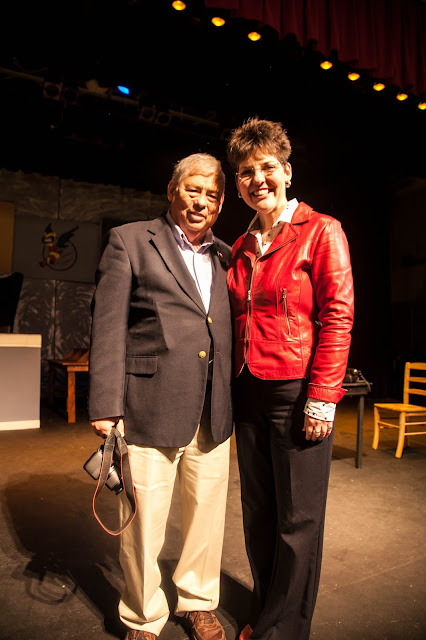 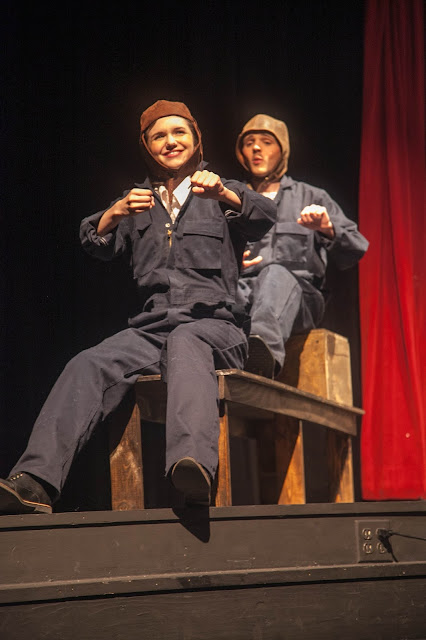 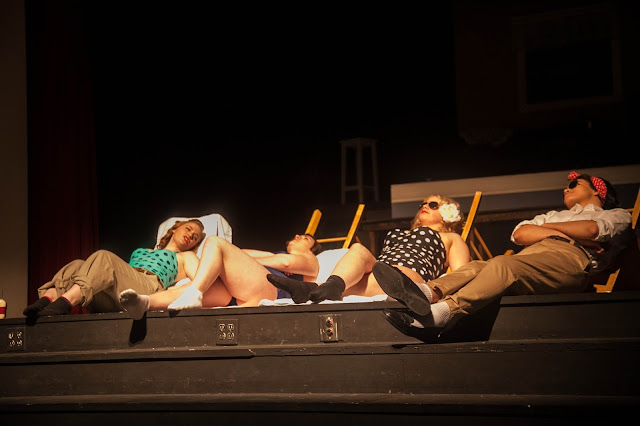 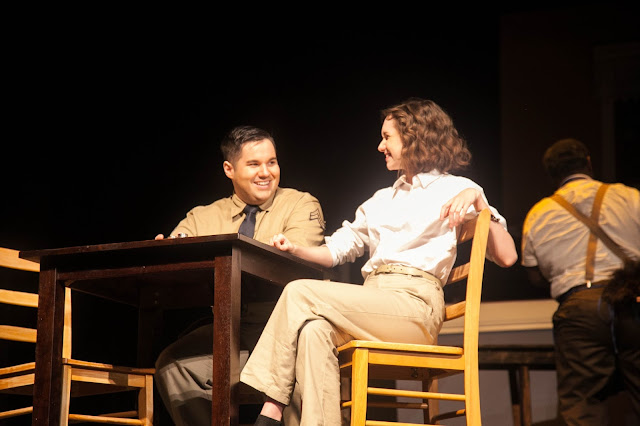 There were crowds of more than 150 at each performance, and the audiences were mesmerized by the real-life drama they witnessed. Costumes and sets and background music were excellent, and PowerPoint images of period photos helped bring the WASPs of WWII back into action. Rachel Theisen played WASP Mabel Rawlinson, who died tragically in a crash. Jaelyn Bergey was superb as Jacqueline Cochran, the WASP commander. And Aaron Rollins, a military veteran, came back to the Navarro campus to portray Air Force General Hap Arnold. This trio led a powerful cast, and there were standing ovations following each performance. 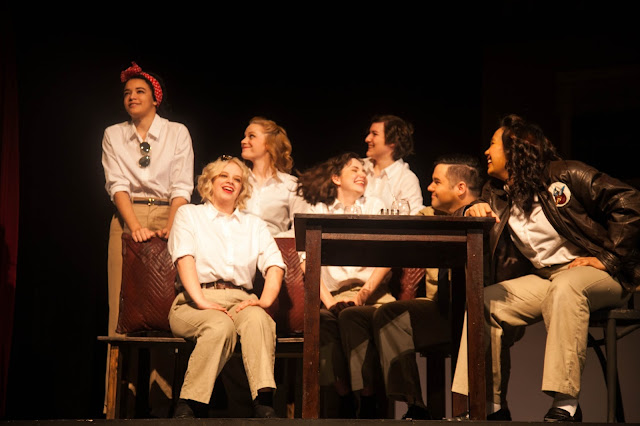 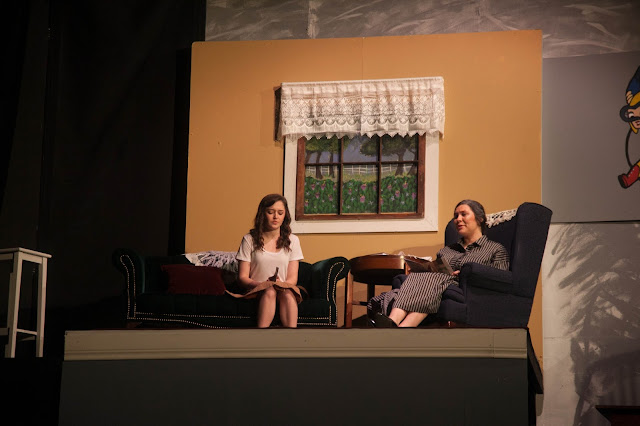 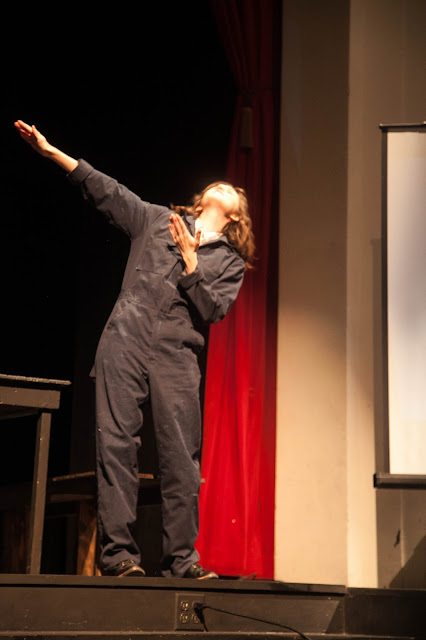 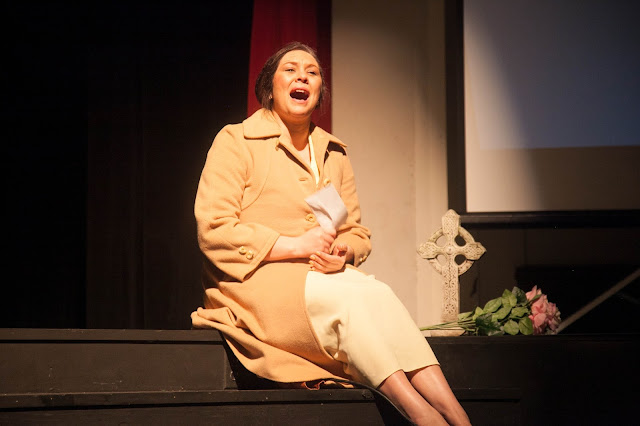 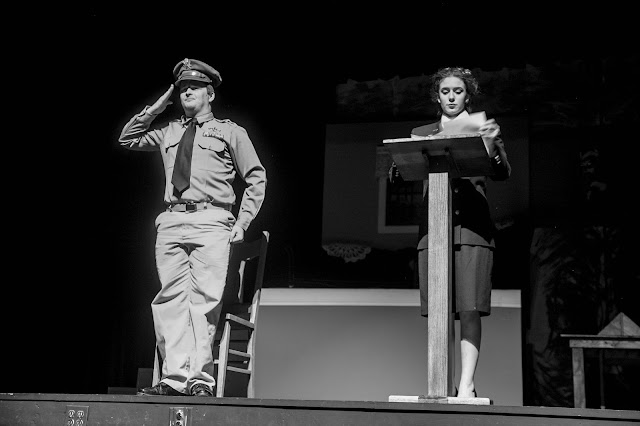 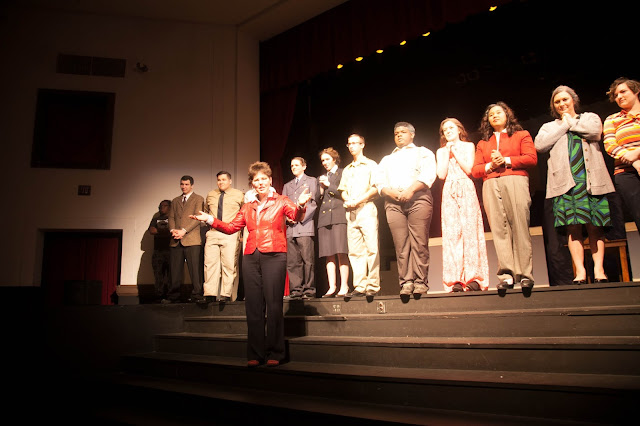 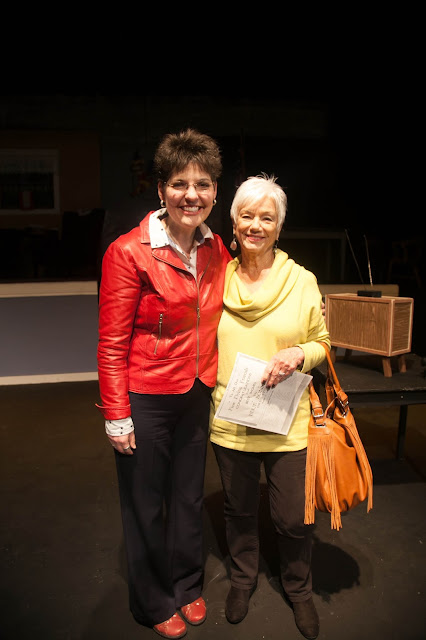 The cast and crew traveled the next week to Brenham, where the community college drama festival was held on the campus of Blinn College. Before an audience of nearly 200 of their peers, the Navarro cast inspired another spontaneous standing ovation. More than 20 awards were presented to the Navarro troupe, and anyone who saw the play would agree that each of these awards and more was richly deserved. Shellie and her cast and crew did an admirable job in making a unique part of WWII history in Texas come back to life onstage, and nearly 800 people witnessed and appreciated their efforts.

Each year the annual meeting of the Texas State Historical Association is held on the first weekend in March - as close as possible to March 2, Texas Independence Day. This year the 121st Annual Meeting was scheduled for March 2-3-4 at the Hyatt Regency in downtown Houston.


I was a day late arriving. I had accepted an invitation to provide a program on the Battle of the Alamo for a combined lunch meeting of the Tyler chapters of the DRT and the SRT on Thursday, March 2. This Texas Independence Day meeting of two patriotic Texas organizations was a splendid event - an ideal way for the State Historian to spend March 2.
I drove to Houston the next morning. As I located the TSHA registration table, I encountered Brian Bolinger, the personable and efficient executive director of the organization. Brian informed me there were more than 700 in attendance, an outstanding crowd.﻿﻿﻿


It seemed as though I saw most of the 700 nearby in the vast exhibit hall. The room was crowded with people and publishers' tables and refreshments. After talking with a number of acquaintances I made my way to the exhibit table of the University of North Texas Press. Executive Director Ron Chrisman was clearing room for a book signing. Making its debut was Eavesdropping on Texas History, an anthology conceived and edited by Mary L. Scheer, chairman of the history department at Lamar University. There are 14 chapters, including one by Mary. She asked each of us to envision ourselves as a "fly on the wall," witnessing an event of historical or cultural significance in Texas.﻿﻿﻿


Mary asked me to provide a chapter on a Texas sporting event, and I chose the 1935 football game between SMU and TCU. These archrivals each boasted a 10-0 record, and the Southwest Conference and National championships rode on the outcome, along with a trip - unprecedented for a Texas team - to the storied Rose Bowl. Despite the efforts of star quarterback Sammy Baugh for the Horned Frogs, SMU won a close decision, although TCU later went on to a Sugar Bowl victory. Football in Texas now became prominent in national circles, and the pivotal nature of this dramatic game included the creation of the Cotton Bowl one year later.


On Friday there was a Fellows Luncheon. The previous day there was a Women in History Luncheon, and on Friday evening the President's Dinner was held at the Rice Hotel. 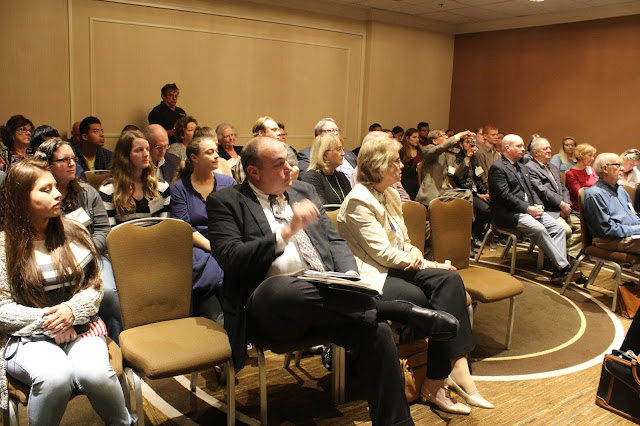 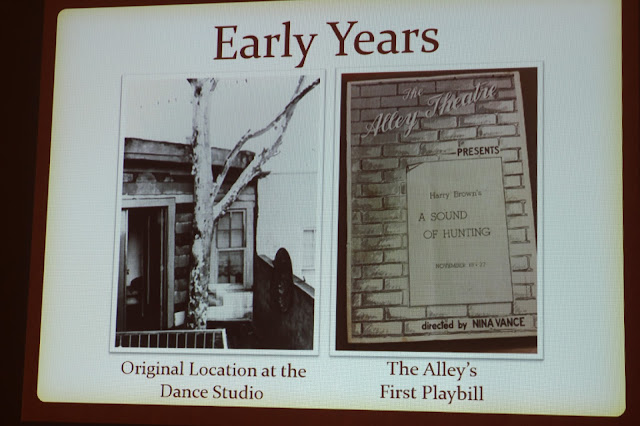 On Saturday morning there was a session sponsored by the TSHA: "History in Action - The College Classroom in 2017 and Presentation of the C.M. Caldwell Memorial Awards." This session focused on the accomplishments of Webb Society chapters in Texas colleges and universities. Two student papers were presented, by Hector Zuniga of Northeast Texas Community College and by John Michael Hoke of San Jacinto College - South. I was asked to conclude the program with a presentation on "Leadership Qualities of Sam Houston." Presider Steve Cure, aided by Charles Nugent, closed the session by handing out awards to deserving chapters and chapter sponsors. 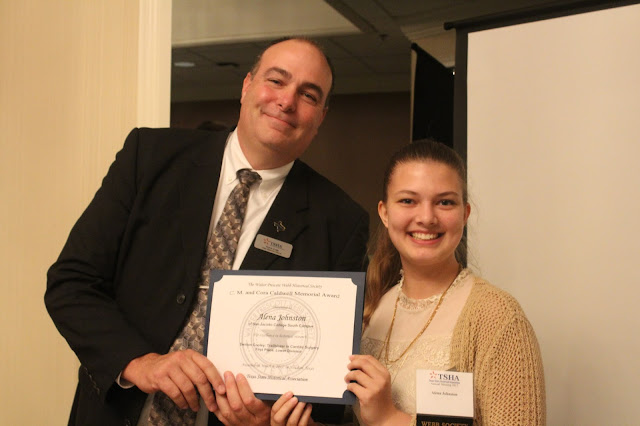 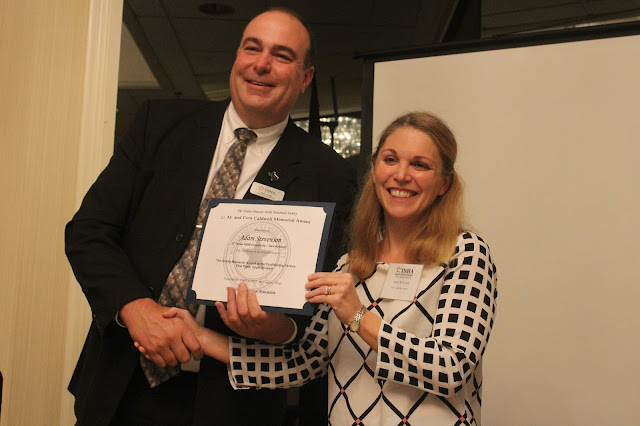 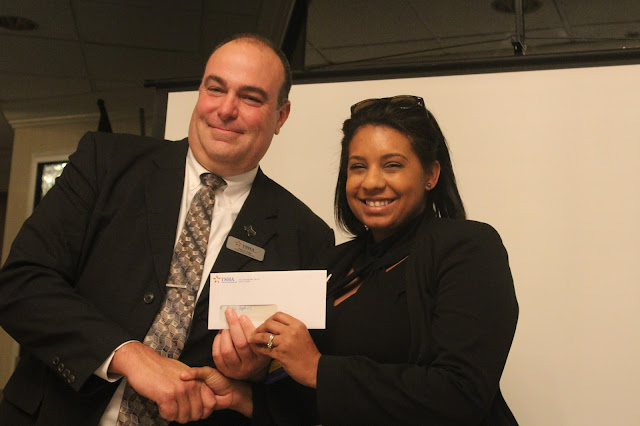 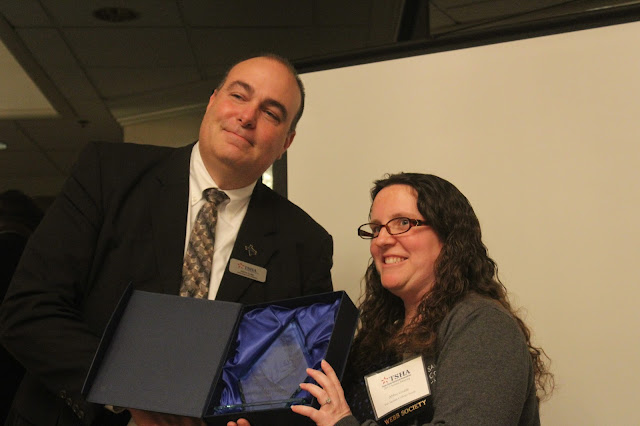 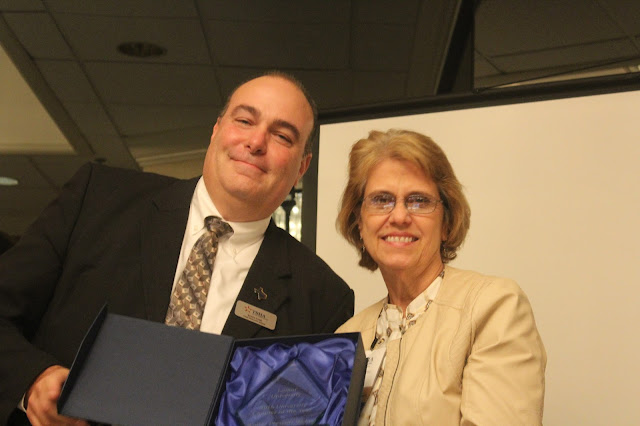 Debbie Leggett Miller is my next-door neighbor in Carthage. Early in my teaching career at Panola College Debbie was a pretty, petite student in one of my freshman history classes. Today Debbie is pretty, petite teacher in her home town of Carthage. She is a music instructor at Carthage Primary School with 40 years experience, and her energy, dedication, and ability to inspire her young students rivals these same qualities during her first years in the classroom.


Debbie was the daughter of W.D. and Bobbie Leggett. Rev. Leggett was the longtime pastor of Macedonia Baptist Church in Carthage. Debbie began piano lessons as a child, and at 12 she became church pianist at Macedonia. When she launched her teaching career at Carthage Primary School, Debbie and a fellow kindergarten teacher, Lisa Cockrell (another former student of mine), teamed to stage a Christmas program with their two classes, which totaled more than 40 students. This Christmas production became an institution at Carthage Primary for 30 years.


Ten years ago Debbie left the kindergarten classroom to become music teacher at Carthage Primary. Working with large numbers of children, Debbie's Christmas shows became Yule season extravaganzas. One spring she staged a Cinco de Mayo celebration, and another year there was a Texas extravaganza. For years Debbie received invaluable help from her classroom aide, Laura Fields. Amber Cheatwood became Debbie's aide when the programs began to focus on patriotism. Principal Kiley Schumacher has provided strong support, including the acquisition of costumes that can be used from year to year.
﻿ 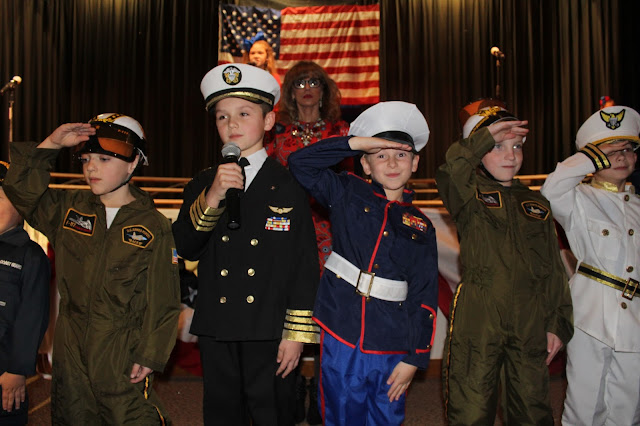 The patriotic extravaganzas have been staged for three years. The venue is the spacious auditorium at Carthage Junior High School, and the large stage is a riot of red, white and blue flags and banners, with more than 160 children onstage. One traditional patriotic song after another is sung by 160 smiling, dancing first graders. Costumed characters from American history periodically take center stage: George Washington, Betsy Ross, Thomas Jefferson, Abraham Lincoln, George Washington Carver, Uncle Sam, Martin Luther King. Finally President Donald Trump, clad in blue suit and red tie and flowing wig, made his appearance (in the person of young Travis Lipsey). 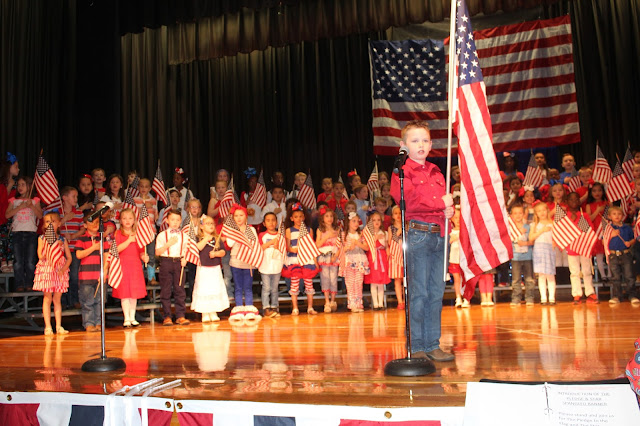 The auditorium was jammed with an audience exceeding 900. Everyone cheered and clapped and shouted approval. It was deeply reassuring to enjoy such a patriotic display. Two nights later the kindergarteners held forth before another 900 people. As State Historian I've been to one event after another in which organizations made a patriotic display of Texana, and now I had the pleasure of seeing a large group of schoolchildren expressing the patriotic values of the USA. 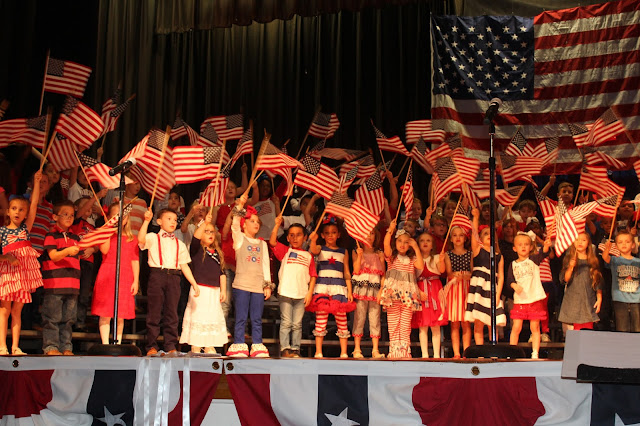 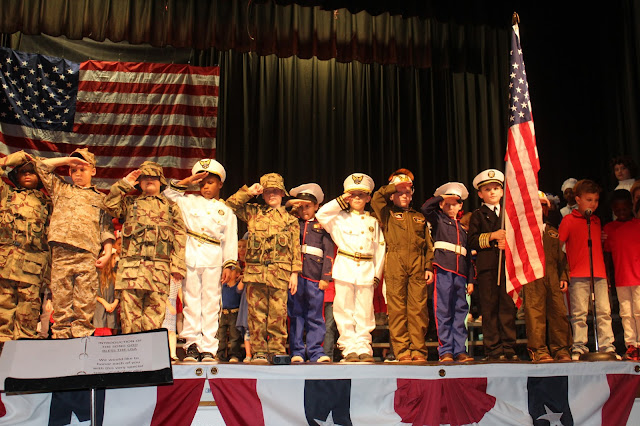 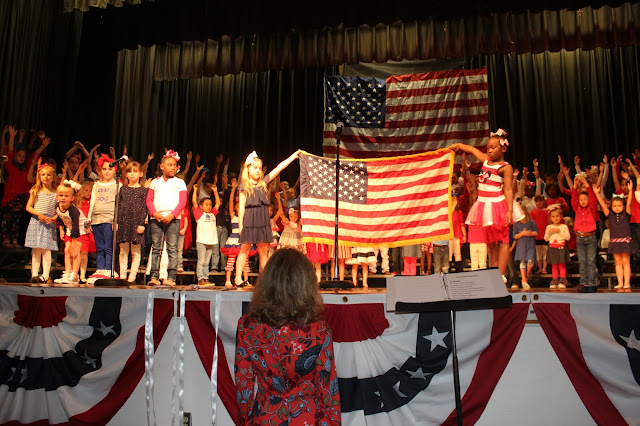