Last week I had the pleasure of participating in the 2016 Annual Roundup of the Texas Plains Trail Region. Several months ago Dr. Barbara Brannon, Executive Director of the TPTR, invited me to deliver the keynote address at the 2016 Roundup, to be held in Childress on July 20-21-22.
The Texas Plains Trail Region is a heritage tourism organization that stretches across a 52-county area of approximately 50,000 square miles centered on the Texas Panhandle. In 1968 Gov. John Connally and the Texas Highway Department established 10 scenic driving trails across the Lone Star State. Three decades later the State Legislature charged the Texas Historical Commission to create a heritage tourism program. Basing their efforts on the 10 scenic driving trails, the THC began by establishing the Texas Forts Trail Region.


The Texas Plains Trail Region promotes historic sites at communities, museums, and in the countryside across the 52-county area. The region is rich in history - Spanish and U.S. Army explorers, Comanche warriors, cavalrymen, ranchers, cowboys, feudists. Through the years I have researched books in the region, visited museums and battlefields and ghost towns and Comanche sites, which now are designated by giant arrowheads and accompanying historical markers in the 52-county region.
So I was eager, as always, to return to the Texas Plains Trail Region. It's a little over 400 miles from my home in Carthage to Childress, and with an early start on Wednesday morning I arrived early in the afternoon. I enjoyed my first look at the new and impressive Childress Event Center. Barbara Brannon was conducting a TPTR Board Meeting in a far corner of the spacious main room. Barbara had graciously asked me to set up a book table for a signing at the end of my address. After finishing the table I hurried downtown to see the Childress County Heritage Museum, now located in the 1935 post office building. The curator, Lee Ann Morren, is a native of Childress who is most enthusiastic about local history. Lee Ann toured me through the museum, then directed me to points of interest downtown. I was especially interested in an antique auto and buggy museum housed in a 1920s car agency building. This museum is operated through the Childress County Heritage Museum, and it is opened upon request.
That evening there was an opening reception at the 501 Winery, across the street from the courthouse. The next morning at breakfast I shared a table with Tai Kreidler, Executive Director of the West Texas Historical Association and - involved as always with almost every historical organization in West Texas - a board member of the Texas Plains Trail Region.
On Thursday morning at the Childress Event Center we were welcomed by Mayor Brett Parr. A highlight of the morning was a masterful and entertaining program on the Red River War by Michael Grauer of the Panhandle Plains Museum in Canyon. Also I was interviewed on-camera by Drew Powell, a news reporter for ABC Channel 7 TV in Amarillo, whose piece provided welcome publicity for the office of State Historian. 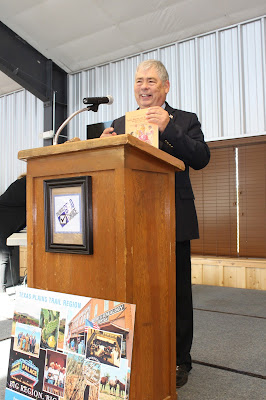 My after-lunch program was entitled "Adventures of a Back Trailer." Ramon Adams, the great compiler of Western words, defined a back trailer as: "To go back over a trail." I related my lifetime of going back over historic trails: overland trails, cattle trails, stagecoach trails, outlaw trails, rail trails - especially the notable landmarks of these trails. I tried to convey the sheer magic of "feeling the ghosts" that attracts visitors to such sites. Afterward I enjoyed a lively book signing, before exchanging good-byes with a roomful of new friends. Friday's event was a workshop, so I departed on Thursday afternoon, but I had enjoyed a grand time among fellow history enthusiasts in Childress. 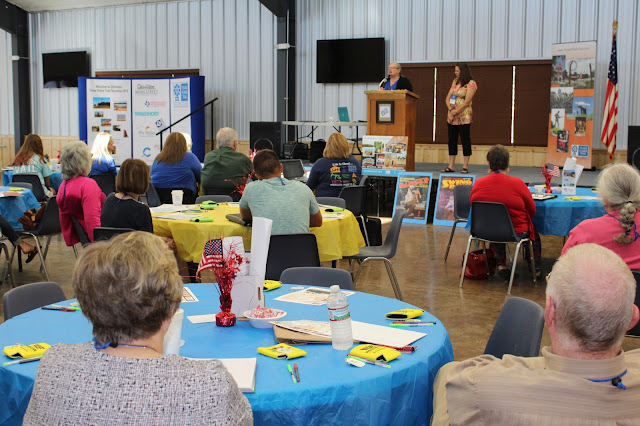 Posted by Unknown at 7:23 PM No comments:

After I was sworn in as State Historian of Texas in 2012 by Governor Rick Perry, my wife Karon smiled and announced that she would serve as my Chief of Staff. There were chuckles around the room, but I knew that Karon had every intention of committing her considerable abilities to the office of Texas State Historian. 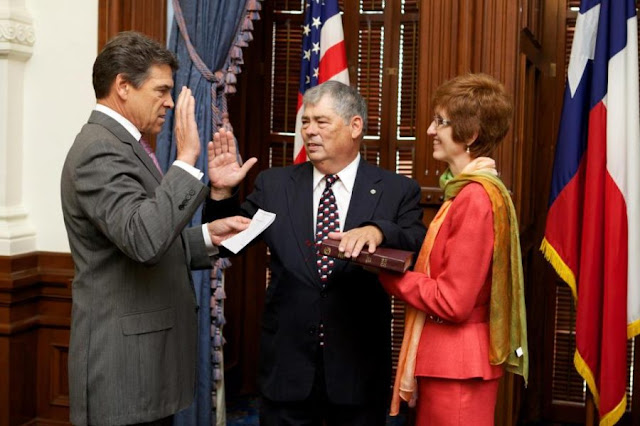 When we married in 1993, Karon began to refer to us as "Team O'Neal." Karon and I were faculty members at Panola College in Carthage, her home town. A 1979 graduate of Carthage High School, Karon was an honor student at Panola College and played a busy role in student activities, especially in the music department. She majored in mathematics at Texas A&M University (Class of '83), and soon earned a Master's Degree in math at Stephen F. Austin State University. After six years as lead math teacher at Carthage High School she joined the Panola College math faculty. She became a master teacher, and served for several years as chair of the Math and Science Department. 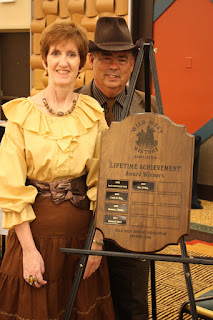 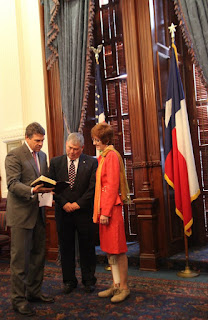 Meanwhile, she generously aided my efforts in the field of history. Twice per summer she drove one of the two college vans across the Lone Star State during my Traveling Texas History classes. She served as women's counselor during my Traveling European History courses. Karon accompanied me on research trips, usually in the West, greatly accelerating my efforts. 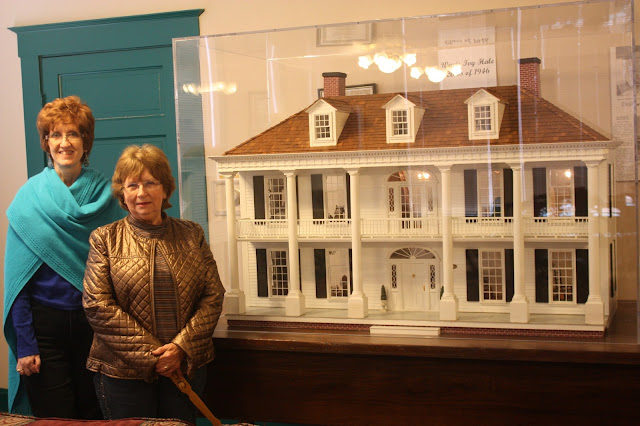 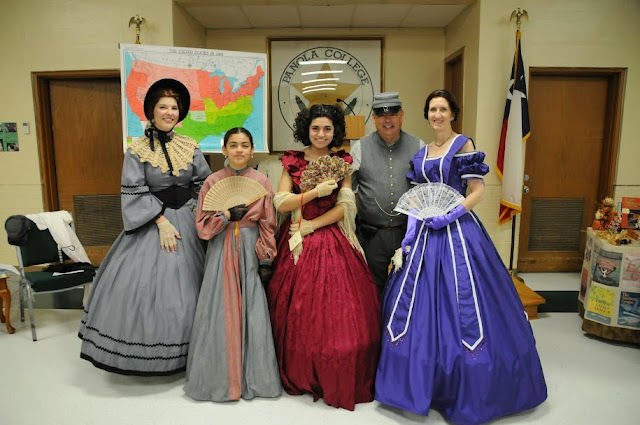 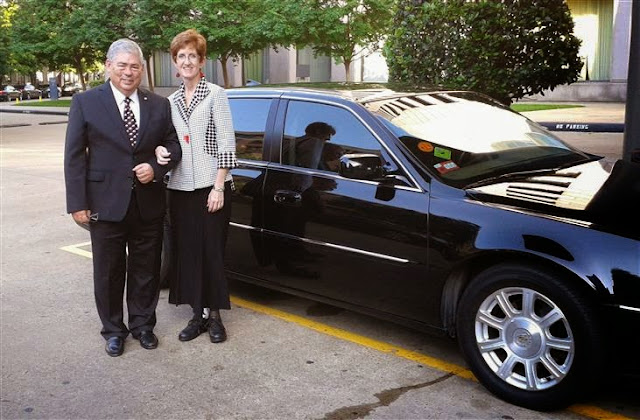 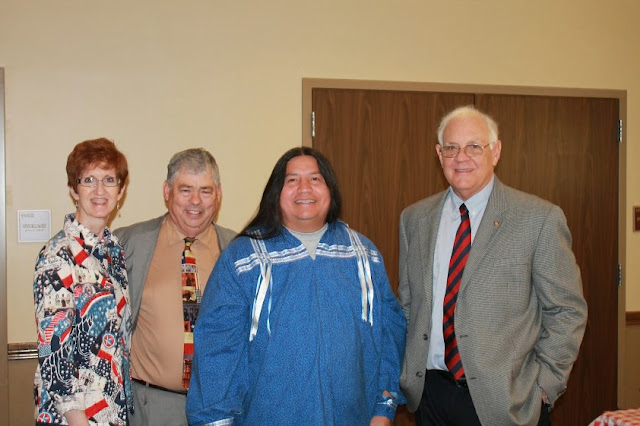 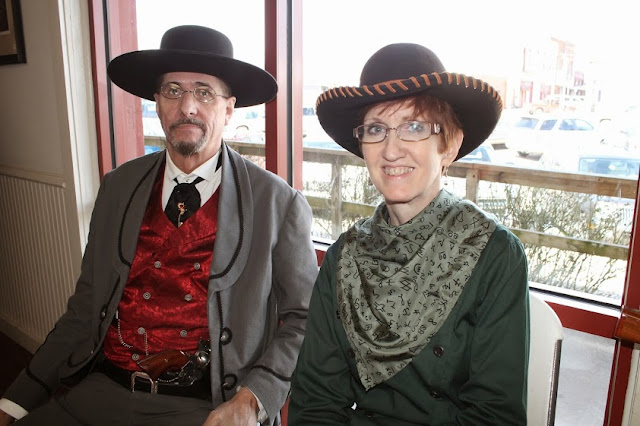 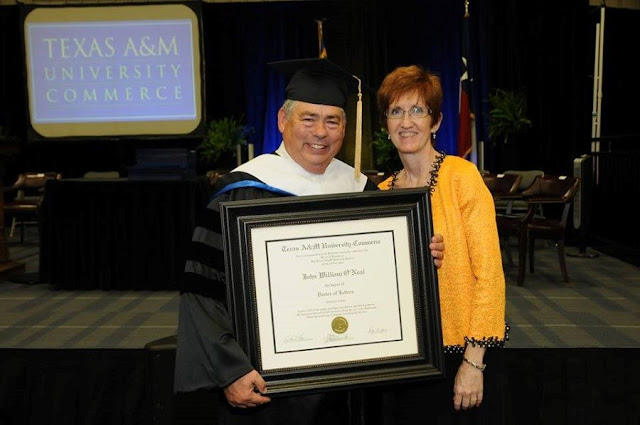 She went with me to history conferences and immediately became popular, because of her sweet nature and because of her colorful and picturesque attire. I write all of my manuscripts - books, articles, book reviews - in pencil, and Karon has converted all of them electronically for publication. She also has helped greatly with photos. 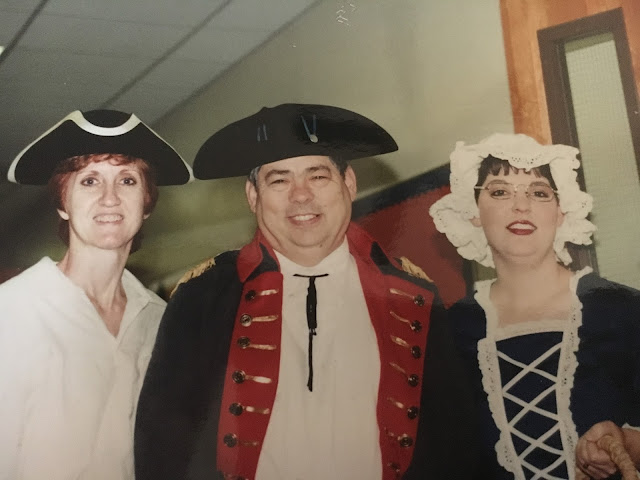 So when Karon stated that she intended to be Chief of Staff of the Texas State Historian, I knew that I was going to enjoy exceptional assistance from a hard-working, competent, and dedicated volunteer. During the past four years my Chief of Staff has attended programs with me throughout Texas. At the San Jacinto Monument on April 21, 2014, she snapped photos as I delivered the keynote address, then she posed - rammer in hand - with a reenactor cannon crew. 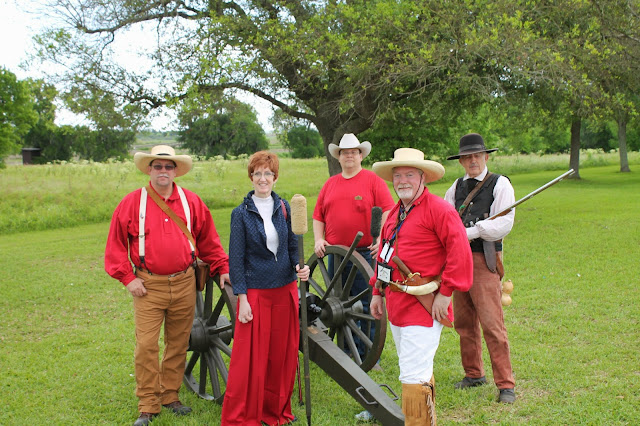 At fourth-grade Texas history cowboy programs she wore Lone Star boots and buckskin gauntlets and a big hat, and during my presentations she quietly pointed to various items of cowboy attire as I referred to them. The little girls, especially, were mesmerized. 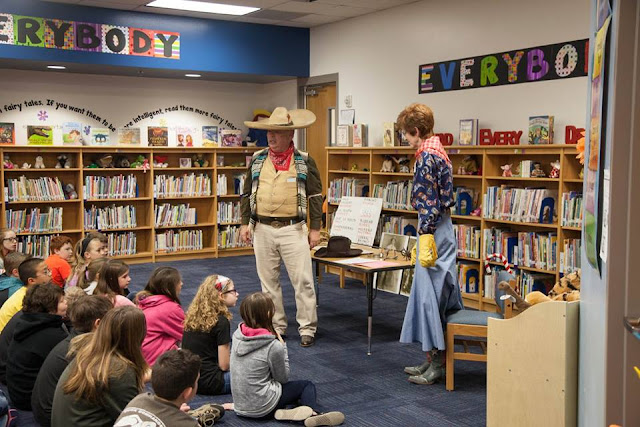 In addition to helping with my manuscripts, Karon learned to create blogs. My predecessor, Dr. Light Cummins, posted blogs during his two-year tenure. When we read them, Karon and I realized it was essential for us to continue the State Historian blog. At first we posted at lonestarhistorian, but after Google purchased Blogspot we posted at lonestarhistorian2. Between these two sites we have posted nearly 200 blogs during the past four years. Each week I write up my recent history adventures - in pencil, of course - and Karon types it and inserts several photos that we have taken of the subject events. It was quite a learning process for Karon - a process I never could have mastered - but she persevered, as always and she has produced one blog after another. 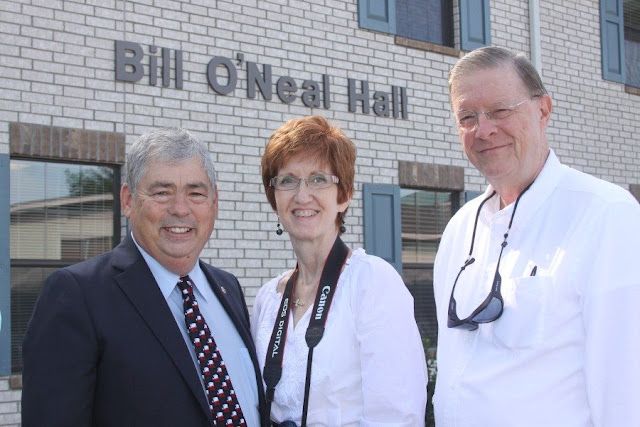 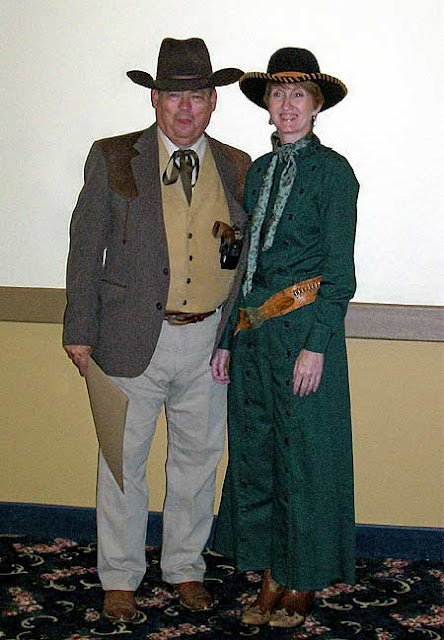 Until this one. A few days ago Karon died suddenly and unexpectedly - she was only 55. She had suffered from MS for more than 15 years, but we continued to travel and research and write and visit our family - four daughters, three sons-in-law and seven grandchildren, who loved to play and read with "GrandKaron." We were about to leave on a trip to watch a granddaughter play basketball last week when Karon's heart stopped beating. There has been a tremendous outpouring of sorrow and love in Carthage and at Panola College, where the school flag was flown at half mast. Central Baptist Church was packed with with hundreds of mourners during her funeral services. 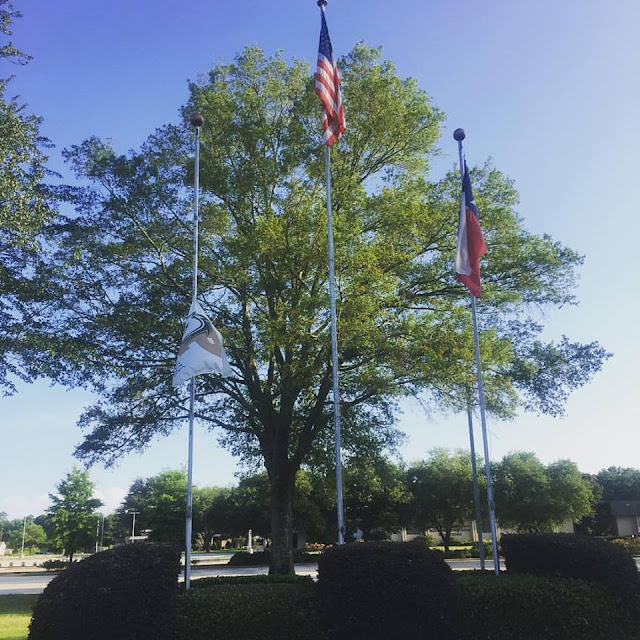 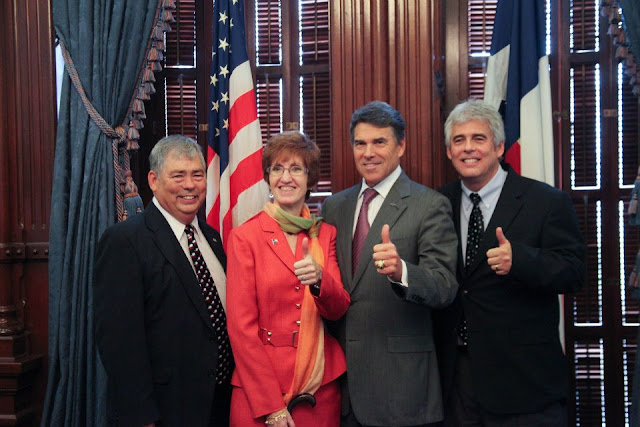 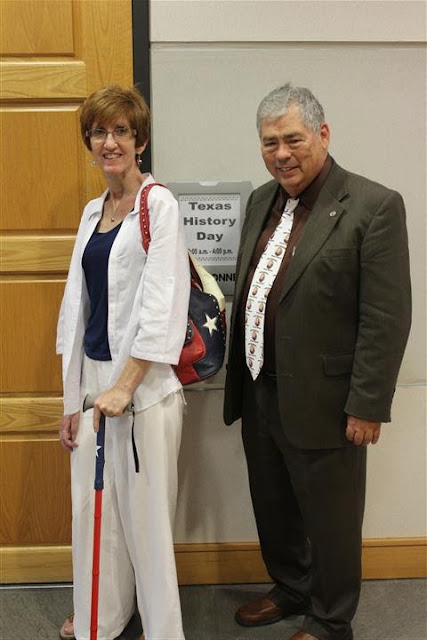 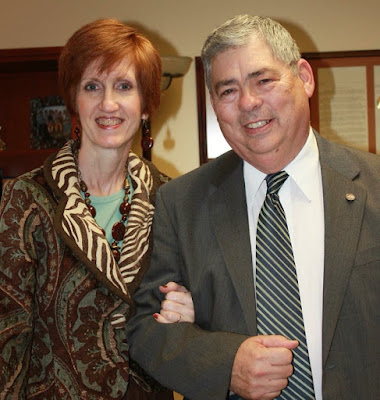 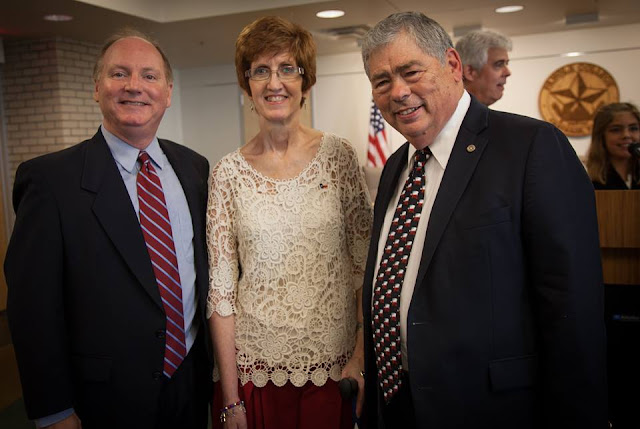 My daughter, Dr. Berri O'Neal-Gormley, volunteered to help me produce this blog. My brother, Mike O'Neal - as tech-savvy as his older brother is not - also offered to keep the blog going. But this one is dedicated to my beloved Chief of Staff. 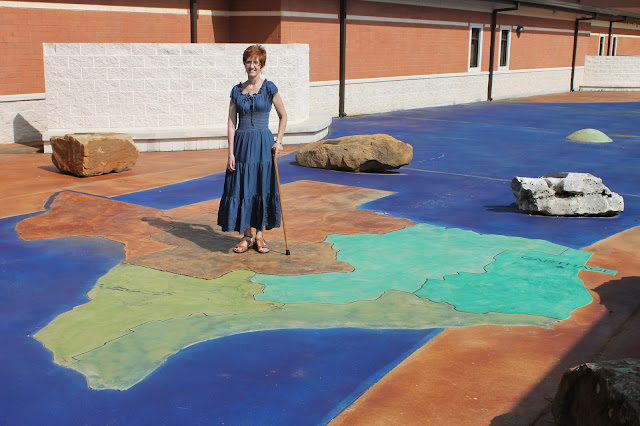