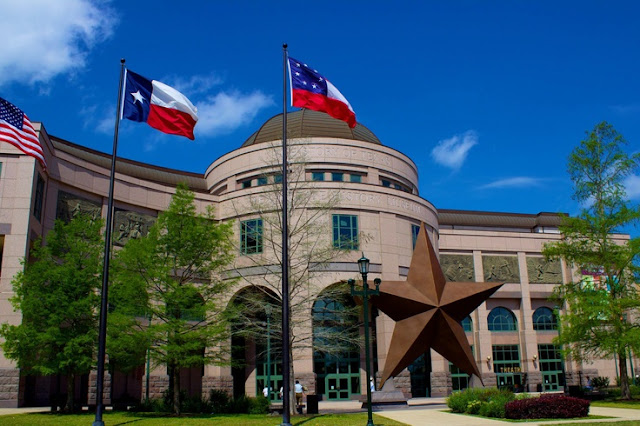 Austin ISD teachers could participate in the conference at no cost, and all participants received two days of professional development credit. There were 94 participants, with a waiting list of 68 teachers. Of course, the Bob Bullock Museum is a superb site for a conference on Texas history, with its imaginative displays and rich collections.


The program was put together by Charles Nugent, TSHA Adult Education Programs Manager. As Texas State Historian I have worked with Charles on a large number of these teacher conferences during the past few years, and I am always impressed at the stellar lineup of presenters he is able to assemble. I am looking forward to speaking on "The Spanish in Texas" at a teacher conference on August 7 at the Region 10 Education Center in Richardson, and later that same week, August 10, at the Texas State Library and Archives building in Austin. 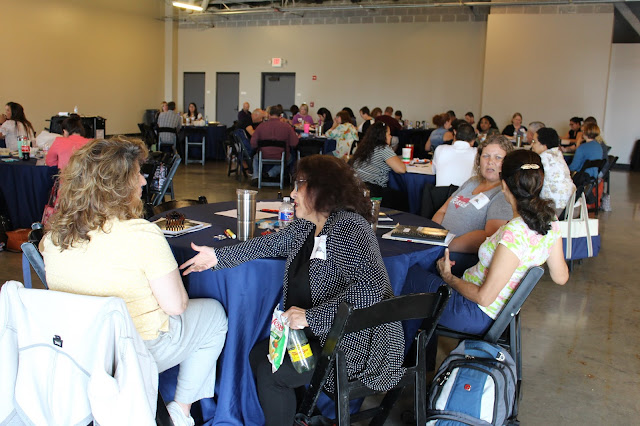 At the Bob Bullock I was asked to speak after lunch on Tuesday on "The Texas Revolution." There were many veteran teachers in the group of 94, along with a few newly-minted teachers.

﻿
Several of the experienced teachers had been reassigned to Texas history classrooms for 2017-18, and they were universally excited to be teaching about the Lone Star State. 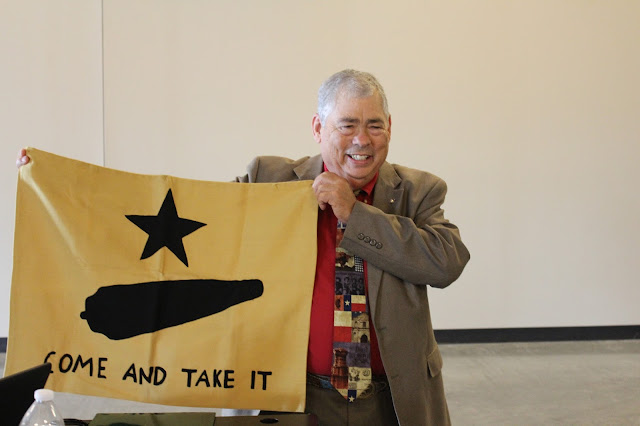 These knowledgeable Texas historians provided a highly responsive audience. Of course, the Texas Revolution is filled with drama and heroism and tragedy, highlighted by such Texas icons as the Alamo, San Jacinto, James Bowie, Davy Crockett, and Sam Houston. I used a number of props, which I hope provided a few classroom ideas for the teachers, and the hour went by rapidly. The teachers asked some fine questions, and I wished them all well in the upcoming school year.
Posted by Unknown at 8:10 PM 1 comment:

A few weeks ago I provided a program for the General Horace Randal Camp of the Sons of Confederate Veterans. This camp is based in Carthage, where I have lived and worked since 1970, so I've delivered quite a number of programs to this chapter through the years.
There are 71 chapters in the Texas Division of the SCV. Members are men who are descended from Confederate soldiers, and they are proud of the courage and the battlefield exploits of their Southern forefathers. Three of my great-grandfathers as teenagers served with CSA units late in the Civil War, trying to defend their home states of Georgia, Mississippi, and Alabama from invasion. Texas made a major manpower commitment to the war, and alone of the Confederate states, Texas had a frontier to defend. There are numerous Civil War program possibilities available to the Texas State Historian, and during my five-year tenure I've made presentations to SCV chapters in Carthage, Tyler, Center, Lufkin, Athens, and Marshall. As State Historian I gave multiple Civil War programs in Tyler and Carthage, and each of these two chapters also requested a talk on the Regulator-Moderator War of early East Texas. The United Daughters of the Confederacy chapter in Henderson twice invited me to a meeting, and the UDC chapter of Longview asked me to provide a banquet program. 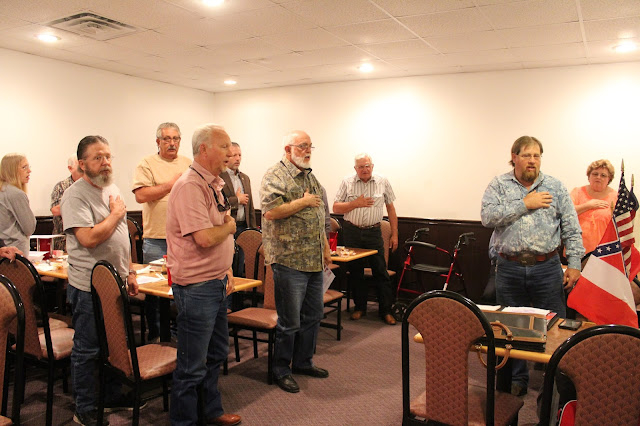 For the SCV program on Thursday evening, April 27, I decided not to talk about some Civil War battle or campaign. I had presented many such programs to the Carthage chapter, so I spoke instead about the highly significant political actions taken by the federal government during the Civil War. Throughout the 1850s the government was virtually deadlocked as northern and southern politicians were adamantly opposed to policies that would not benefit their particular section. For example, after the 1849 discovery of gold in California, instead of making provision to construct a transcontinental railroad, congressmen squabbled endlessly over whether the route should originate in the North or the South. 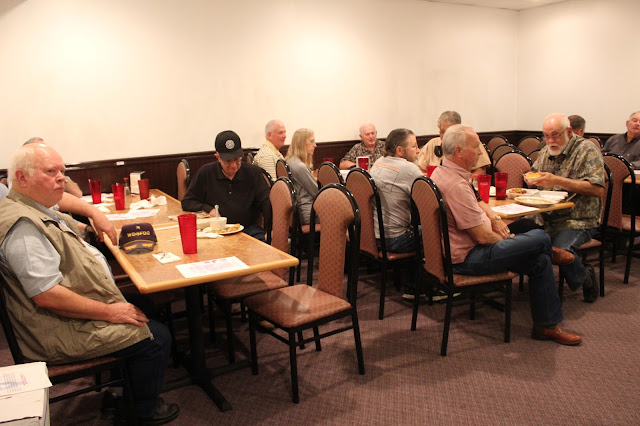 But with the start of the Civil War, southern congressmen returned to the South, and northern politicians now could pass a backlog of legislation with little opposition. The import tariff was raised significantly and would remain high into the 20th century, as America industrialized. The Homestead Act made available to farmers free 160-acre parcels of land throughout the West, and during the next three decades more than one million homestead farms were established throughout the American frontier. The National Banking Act stabilized the nation's banks and the American economy. The Morrill Land Grant Act made it possible for states to establish "Land Grant colleges," publicly-funded teachers colleges and agricultural and mechanical colleges, which would offer less expensive alternatives to the private colleges of America. The Emancipation Proclamation declared slaves of the South to be free. And legislation passed in 1862 and 1864 finally launched a transcontinental railroad, with the Union Pacific RR headed west out of the existing northern network of tracks, while the Central Pacific RR built eastward from California. 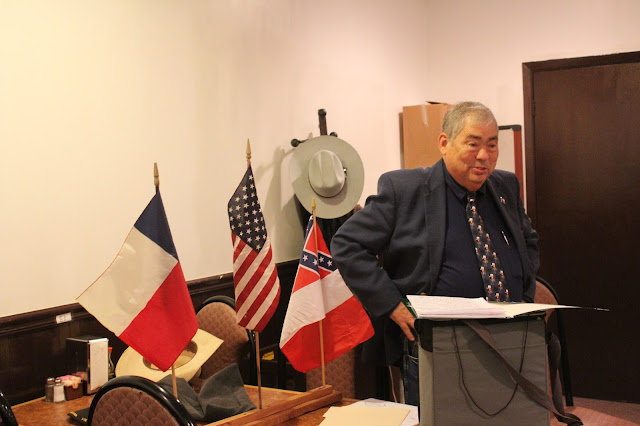 Routes were surveyed and construction began while combat raged across the South. With the end of the war a host of veterans, mostly young men made restless by combat and with a new sense of teamwork, found employment with the Union Pacific. The U.P. employed more than 10,000 men, the largest work force in the nation's history, but soon matched by the Central Pacific. The Union Pacific was headed by former Union general Grenville Dodge, while other high-ranking officers assumed key leadership roles. The logistics of supplying such vast work forces had been mastered during the war. Former sergeants led work crews. The completion of America's first transcontinental railroad was very much a Civil War story, and I was pleased to share it with an SCV group.
Posted by Unknown at 5:53 PM 102 comments: 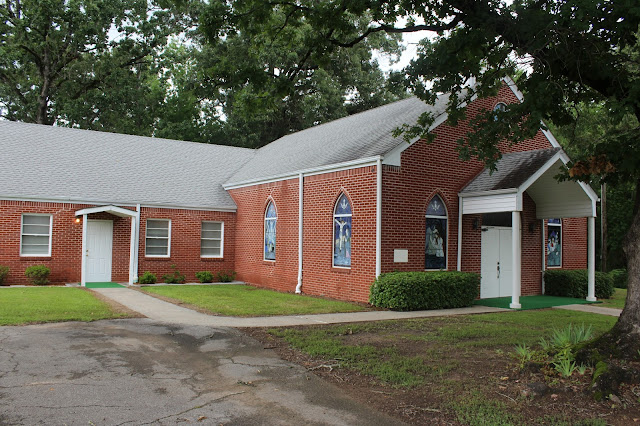 Settlers began arriving in the wilderness of Panola District in the 1830s. The only two settlements were Pulaski and Grand Bluff. Both were log cabin villages and ferry crossings on the Sabine River, and Pulaski served as the seat of Panola District and of newly-organized Harrison County. Panola County finally was organized in 1846, and in that year Carthage was platted to be the county seat in the center of the county. 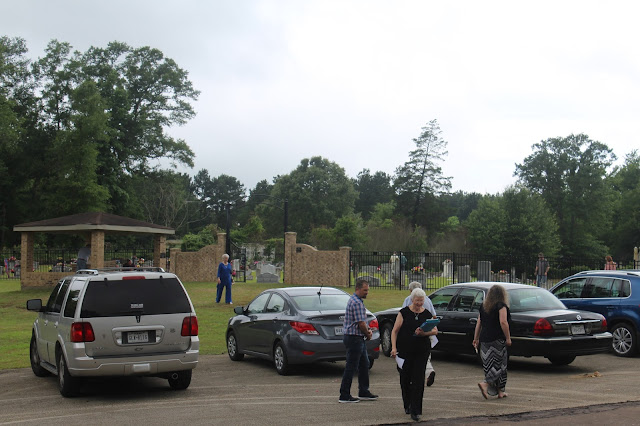 Before Panola County was organized, before the Republic of Texas became the 28th state in the Union in 1846, two congregations were formed in the rural area a few miles west of the site of Carthage. Shortly after Texas broke away from Mexico - and the requisite Catholicism - the Methodist denomination sent three volunteer missionaries to the Lone Star Republic. One of these men, Littleton Fowler, organized the first Methodist church in Texas, near San Augustine. Fowler acquired a farm in Sabine County, took a bride, and had a daughter and a son, who would become a prominent Methodist minister. All the while Reverend Fowler was organizing Methodist congregations, including a band of believers at the rural neighborhood of Macedonia, in 1843. (Sadly, Fowler died only three years later, at the age of 43.) 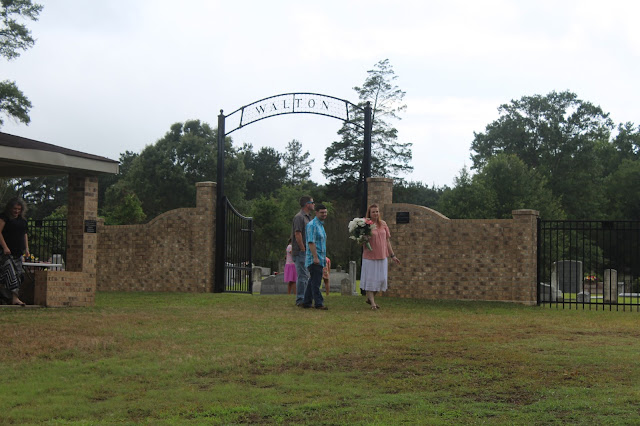 Two years after a Methodist congregation was established in Panola County, Baptist missionaries Isaac Reed and Lemuel Herrin organized a sister congregation at Macedonia, in 1845. 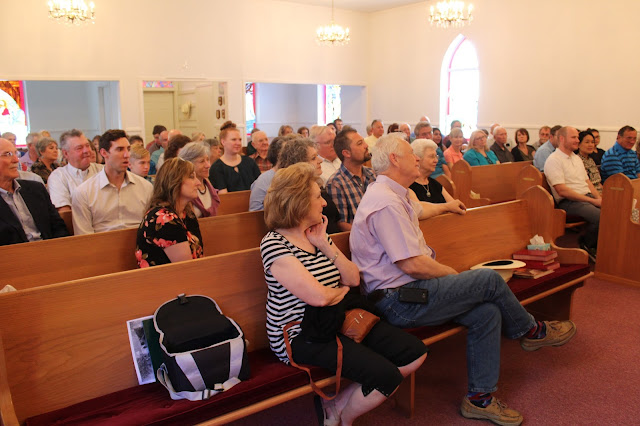 The two congregations erected a log church, while conducting Methodist and Baptist services on alternate Sundays. During the week, for a few months each year, a field school was held for neighborhood children. When the church/school burned in 1880, the Baptists moved a few miles east, toward Carthage, and built Macedonia Baptist Church. In 1872 John Ross, great-grandfather of Dan Ross, donated 3.6 acres for a Methodist church and adjacent cemetery. Following the fire of 1880, Ebenezer Methodist Church was erected, and Walton Cemetery (named after a nearby family) and Walton School were opened.  Meanwhile, at Old Macedonia the cemetery became neglected and overgrown. A few years ago, as State Historian, I spoke at the dedication of the reclaimed Old Macedonia Cemetery.

On Sunday, June 4, the Ebenezer Church auditorium was packed with more than 100 people. Cemetery Association Secretary-Treasurer Karen Bagley, a former student of mine at Panola College, read the minutes. Dan Ross approved the minutes and conducted a brief business meeting. Dan next introduced Eddie Pride, who sang and played two songs, with the accompaniment of a bass guitarist. Next I spoke for half an hour, describing the history of the church, and remarking upon the legacy that was handed down by the church's pioneers. Afterward we enjoyed a delicious "dinner on the grounds," and I wondered how many congregational meals had been held on these grounds in the last century and a half.