Children of the Republic of Texas 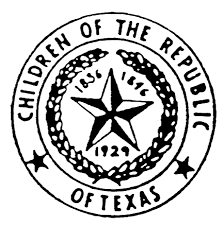 The CRT was organized in 1929 to foster the study of Texas history among Texans to young to join DRT or SRT chapters. There is a special focus on fourth- and seventh-grade schoolchildren, who study Texas history in the classroom. Today CRT boasts more than 2,000 members statewide.

On Sunday, August 16, I attended an afternoon reception for the new President General of the CRT, Sarah Elizabeth Funderburk of Carthage. The previous day, at the 202nd celebration of the Battle of Medina at Pleasanton, I met two other state officers of the CRT, brothers Joseph and Jacob Lopez. Their mother, Arlene Lopez, asked me to pose for a photo with her children. She explained that Joseph recently had been elected Corresponding Secretary General of the CRT, while Jacob was the new Historian General. Furthermore their sister, Jodi, is an officer in the Alamo Courier Chapter. The Lopez family home is in Bulverde, and husband-father Jose was a re-enactor at the Medina Battlefield. A few years ago Jose told his children that a direct ancestor had fought at the Battle of Medina. The family began to investigate their ancestor and his descendants and their background, which provide material for requisite CRT projects. Each of the Lopez children joined CRT and became officers in the Alamo Courier Chapter. Joseph and Jacob have become state officers, and their parents are to be commended for encouraging their Texas history efforts.


The day after I met the Lopez family, I was back in Carthage. Following church I went to our Old Jail Museum, where a reception was being held for the CRT President General, Sarah Funderburk. Sarah is the granddaughter of a longtime faculty colleague of mine, Liz Hedges, and Sarah’s parents are former students of mine – Jason and Kim Hedges Funderburk. Following her retirement from Panola College, Liz became active in family genealogy research, as well as in Daughters of the Republic of Texas and Daughters of the American Revolution. Indeed, through the years Liz enlisted me to provide an occasional program for chapters that she led.

Her activities piqued the interest of her granddaughter, and Liz guided Sarah into membership, and soon, leadership roles. Sarah is a member of the Mary Jane Lyday CRT Chapter of Longview, and she has developed excellent research projects. Leadership in her local chapter soon led to state offices: chaplain general, second vice president general, and last year first vice president. In June, at the 2015 CRT State Convention in Brenham, Sarah was elected President General.

“This year was one of our biggest conventions,” related Sarah, “and I was very honored to be participating in it and being elected as president general for the upcoming year.”

President General Funderburk has ambitious plans, and her senior year at Carthage High School will include a great deal of travel. And as Sarah has advanced to the presidency general, her grandmother has become a member of the DRT Board of Management, while also serving as CRT Registrar General for the DRT. Furthermore, at the state convention in Brenham, Liz was selected as the Grandmother of the Year. While I was learning about these matters from Sarah and Liz, I received an invitation as State Historian to deliver the keynote address at the 2016 State Convention of CRT in Castroville. I eagerly accepted, and I’m already looking forward to my first CRT event on June 25, 2016. 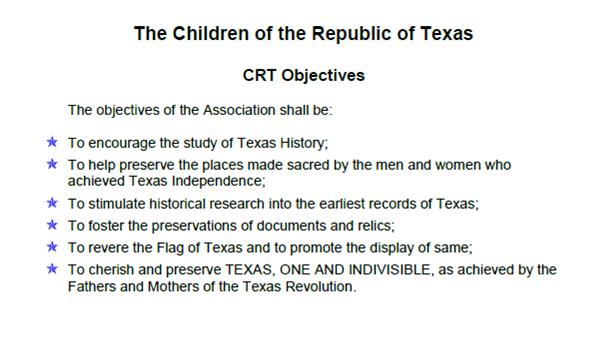