On Tuesday evening, October 11, I met with the Lone Star Defenders Camp of the Sons of Confederate Veterans in Lufkin. This SCV group meets at Lufkin Barb-B-Q, a local favorite where we enjoyed a terrific meal. A couple of years ago membership in the camp had declined badly, and monthly attendance was no more than six. But new Camp Commander Thomas Anderson has worked hard to recruit new members and to provide appealing programs, and attendance has blossomed. Meanwhile, Larry Cawley has taken charge of program arrangements. Larry lined up my appearance, and nearly 30 members attended. 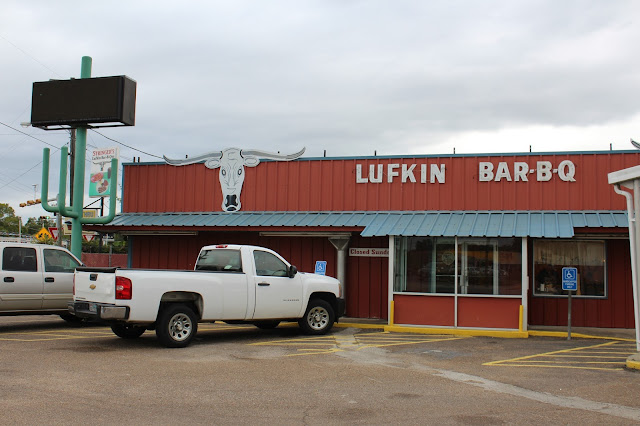 I spoke on “Texas During the Civil War,” pointing out the enormous contributions made to the war effort by the Lone Star State. In addition to cotton production and manpower (Texas men fought on every front of the Confederacy), Texas was the sole Confederate state to fight a two-front war – Comanche and Kiowa war parties hammered the frontier of the Lone Star State throughout the Civil War. Otherwise, Texas successfully defended its borders from Union troops, most spectacularly at Sabine Pass, where 42 Texans led by Capt. Dick Dowling turned back an invasion force of 17 ships and 4,000 men with a barrage of artillery fire. Also, a month after Robert E. Lee’s surrender at Appomattox, Texas troops commanded by Col. John S. “Rip” Ford defeated a force of Union occupation troops in a running fight near Brownsville. Thus Texans enjoyed the satisfaction of a victory in the final battle of the Civil War.
On my drive to and from Lufkin I passed through Nacogdoches, and a little later in the week I returned for the fall meeting of the East Texas Historical Association. The ETHA customarily meets each fall on the campus of Stephen F. Austin State University, although tradition will be broken next fall when we meet in Galveston, which has been a popular destination for several of our spring meetings.
Program sessions began on Thursday afternoon and continued until Saturday noon, covering a vast array of topics from “Black Cowboys During Slavery” to “Soldado: A Chicano Veteran Tells His Story.” A session of programs was presented by the West Texas Historical Association, and by the Texas Folklore Society, the Central Texas Historical Association and Houston Community College. There was a Black History Breakfast on Friday and a Women’s History Breakfast the next morning. On Thursday evening the annual Max and Georgiana Lale Lecture Series featured the Texas Secretary of State, Carlos H. Cascos.
I participated in a session on Sam Houston: From Virginia to San Jacinto. My nephew, Dr. Chris Smith, presented “Young Sam Houston.” Chris is a member of the History Faculty at Liberty University in Virginia, Houston’s native state. I followed with “Old Sam Jacinto.” A special session marked the publication of Archie P. McDonald: A Life in Texas History, based upon oral interviews conducted and edited by Dan Utley and recently released by Texas A&M University Press. Archie served as Executive Director of the ETHA for 37 years, and a packed house listened to this program about the beloved leader of the Association.

On Friday evening the Fellows of the Association Reception honored current Fellows of the ETHA and introduced three new Fellows: Mary L. Scheer, Mary Jo O’Rear, and Kyle Wilkison. This event was followed by the Presidential Address Banquet, featuring a program by ETHA President Wilkison.


The fall conference closed with the ETHA Awards and Business Meeting Luncheon. I was privileged to present the Ottis Lock Awards. The Book of the Year was a unanimous selection of the Lock Awards Committee: Seeds of Empire: Cotton, Slavery, and the Transformation of the Texas Borderlands, 1800-1850, by Andrew Torget. The Joe Atkins Public School Educator of the Year was Stephen Wright of McMichael Middle School in Nacogdoches. Patricia Richey of Jacksonville College was named Higher Education Educator of the Year, and she also was awarded a $750 Lock Research Grant.

The new slate of officers was headed by George M. Cooper of Lone Star College. George put together an outstanding fall program, and his first act as ETHA President was to announce that the spring meeting will be held in Marshall, an East Texas city with a rich history that has hosted several successful spring meetings in the past.