From the Carthage Library to Kilgore's Region 7 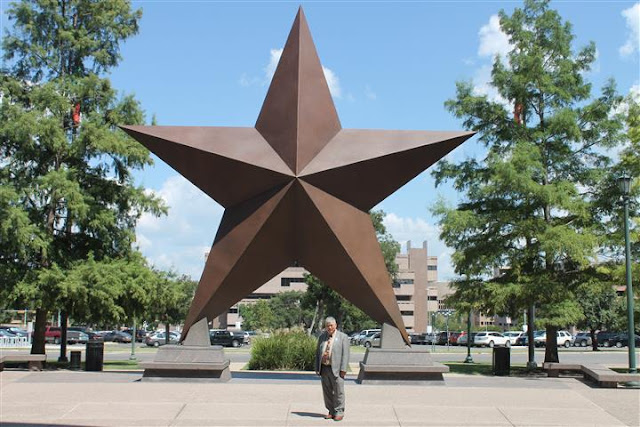 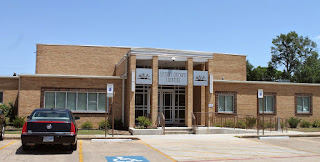 On Thursday morning, June 11, I arrived shortly after opening time at Sammy Brown Library in Carthage. I began unloading branding irons, spurs, posters, vaquero gear, broad-brimmed hats, cowboy attire, and other western items. I was assisted by Head Librarian Debbie Godwin and some of her staff members, and by ten o’clock all was in readiness.

Early this year, Debbie had invited me to participate in the Summer Readers’ Program, and I was delighted at the opportunity to engage young readers. Debbie informed me that this summer’s programs would focus on Texas heroes. I settled on “Texas Cowboys – Texas Icons.” Texas cowboys ultimately became the world’s Number One Folk Hero. The Spanish introduced cattle and horses to the Western Hemisphere, and Texans picked up the equipment and techniques of handling cattle from vaqueros. From Texas the Cowboy Culture and the Range Cattle Industry spread across the West and eventually to the world. Texas produced vast ranches, from the King Ranch to the three-million-acre XIT. Legendary ranchers – such as Richard King and Charles Goodnight, Shanghai Pierce and John Chisum – became famous cattle barons. Trail drives radiated out of Texas and captivated the American populace. Rodeos popularized cowboy entertainment, and Texan Bill Pickett originated the event known as bulldogging. Cowboy popularity became even more widespread through Western movies, while Texans Gene Autry and Tex Ritter became two of the top three most successful “Singing Cowboys” (the third, Roy Rogers, was from Ohio, but was married to a beautiful, talented Texan, Dale Evans, the “Queen of the West”). 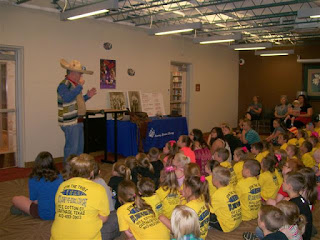 More than 70 youngsters crowded into the Education Room at the Sammy Brown Library. There was much to share with them, and their eager, enthusiastic response was a testimony to the lasting appeal of the Texas cowboy – riding horseback, roping, eating at chuck wagons, living on ranches. And I made it clear that young ladies born on ranches shared this colorful lifestyle. The boys and girls enjoyed themselves – but the State Historian enjoyed himself even more! 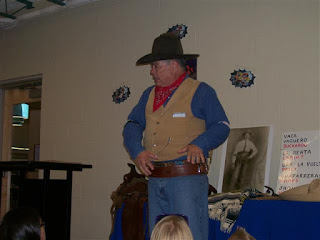 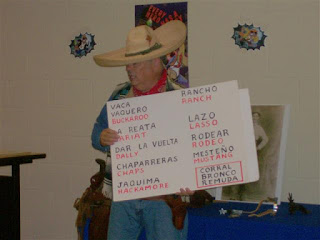 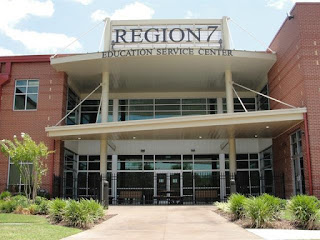 A few days later I brought my cowboy gear and a somewhat longer and more mature version of this program to Kilgore’s Region 7 Educational Services Center. Cheri Hood, the center’s Social Studies Specialist, staged a “Social Studies Summit” for professional development credit for Social Studies teachers throughout the area. Cheri asked me to deliver the keynote program at the start of the day. With such a diversity of teaching levels and courses, Cheri and I decided that a program on Texas Cowboys and the Range Cattle Industry would have the broadest appeal and possibilities for classroom use. 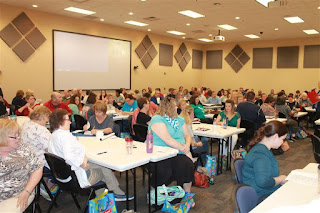 The Social Studies Summit attracted more than 150 teachers and the Region 7 Oak Room was packed. I provided a handout I had developed and a lot of materialmost of which could be used in their classrooms. We had a lot of laughs, and the hour passed quickly. I had the pleasure of seeing several former students who now are teachers. Sherry Walker Parker long taught Texas history at Tatum, but she graduated from Carthage High School and she has moved back to CHS as a teacher of economics. Sherry told me that she misses Texas History, and our discipline will be richer if she is able to return to her favorite subject someday. Sherry was kind enough to take my camera and photograph the Texas Cowboy program.


I stayed in the Oak Room for the next hour. Cheri Hood persuaded me that, since I was coming to Kilgore anyway, I should remain long enough to present a breakout session. I agreed to talk about “Texas During World War II,” which stresses the extraordinary contributions made by Texas and Texans during the biggest event of the 20h century. A nice segment of the crowd stayed with me. I have a great many World War II artifacts to use during this presentation (which was one of my favorite lecture topics in my Texas History classes at Panola College). I also utilized a PowerPoint which Karon and I had put together. Although Karon could not come with me, Cheri Hood graciously set up the equipment and expertly showed me what to do – and it worked! 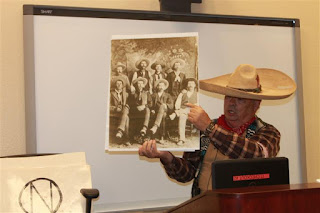