San Augustine and Chronicle of the Old West 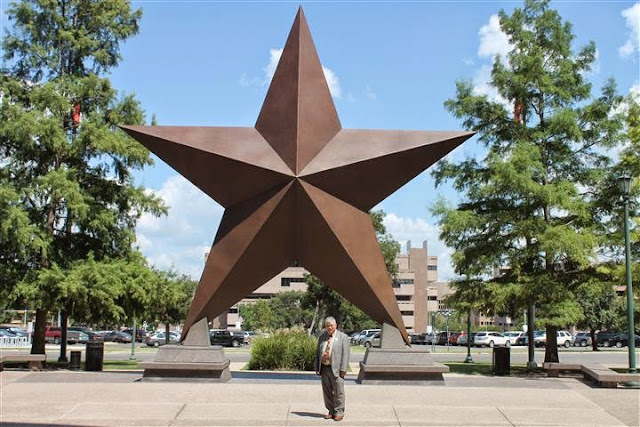 On Tuesday evening, April 28, I arrived in San Augustine to participate in the monthly meeting of the San Augustine Historical Society. I took a few minutes to drive by some of the early Texas architectural gems of San Augustine, before parking at the old movie theater that has been converted to a museum and meeting place. I was met by Marshal McMillan, a local businessman and history enthusiast who had invited me to speak at the May meeting. Marshall helped me unload a number of props and he found a table to place beside the speaker’s stand. After arranging my props, I began to greet early arrivals. It was a pleasure to visit with John and Betty Oglesbee, longtime friends from the East Texas Historical Association.

Following refreshments, a business meeting was held, and I was impressed by the large number of projects the Society is sponsoring in this historic community. I had been asked to speak on “Gunfighting in Texas.” I stressed the role played by San Augustine during the Regulator-Moderator War, the first and deadliest of the blood feuds of Texas.
Just before I began the program, a couple slipped into the audience. I thought the man looked familiar, and when I finished my remarks, he immediately stepped up beside me. Signaling that he wanted to speak, he announced that more than three decades earlier he had been a student in one of my Early Admission history classes offered by Panola College at Marshall High School. He stated that he had no intention of going to college, but he signed up for the Early Admission class “because the prettiest senior girls enrolled.” Later he decided that college work was far more captivating than he ever imagined, and he continued on after high school to a degree. His words, of course, offered the highest praise any teacher could want. When he finally mentioned that his name is Jeff Cox, I immediately remembered the outstanding history project that Jeff and a classmate, Jackie Lloyd (who recently announced his retirement as Athletic Director at Harleton High School), conceived and performed by Jeff and Jackie. They built an outdoor boxing ring and put on an excellent exhibition of 1890s pugilism (I was drafted to referee). I am deeply grateful to Jeff for taking the trouble to attend the meeting and to make a public statement on my behalf. 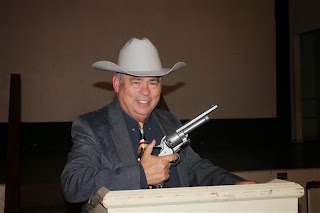 The following week I taped a half-hour interview about “Gunfighting in Texas” with Dakota Livesay. Years ago Dakota and his beautiful wife Sunny, created Chronicle of the Old West, a monthly publication and an hour-long syndicated radio show. Through the years I’ve provided a large number of interviews for Chronicle, and occasionally, after delivering an address somewhere, a member of the audience will come to me and say, “You’re that radio guy!”