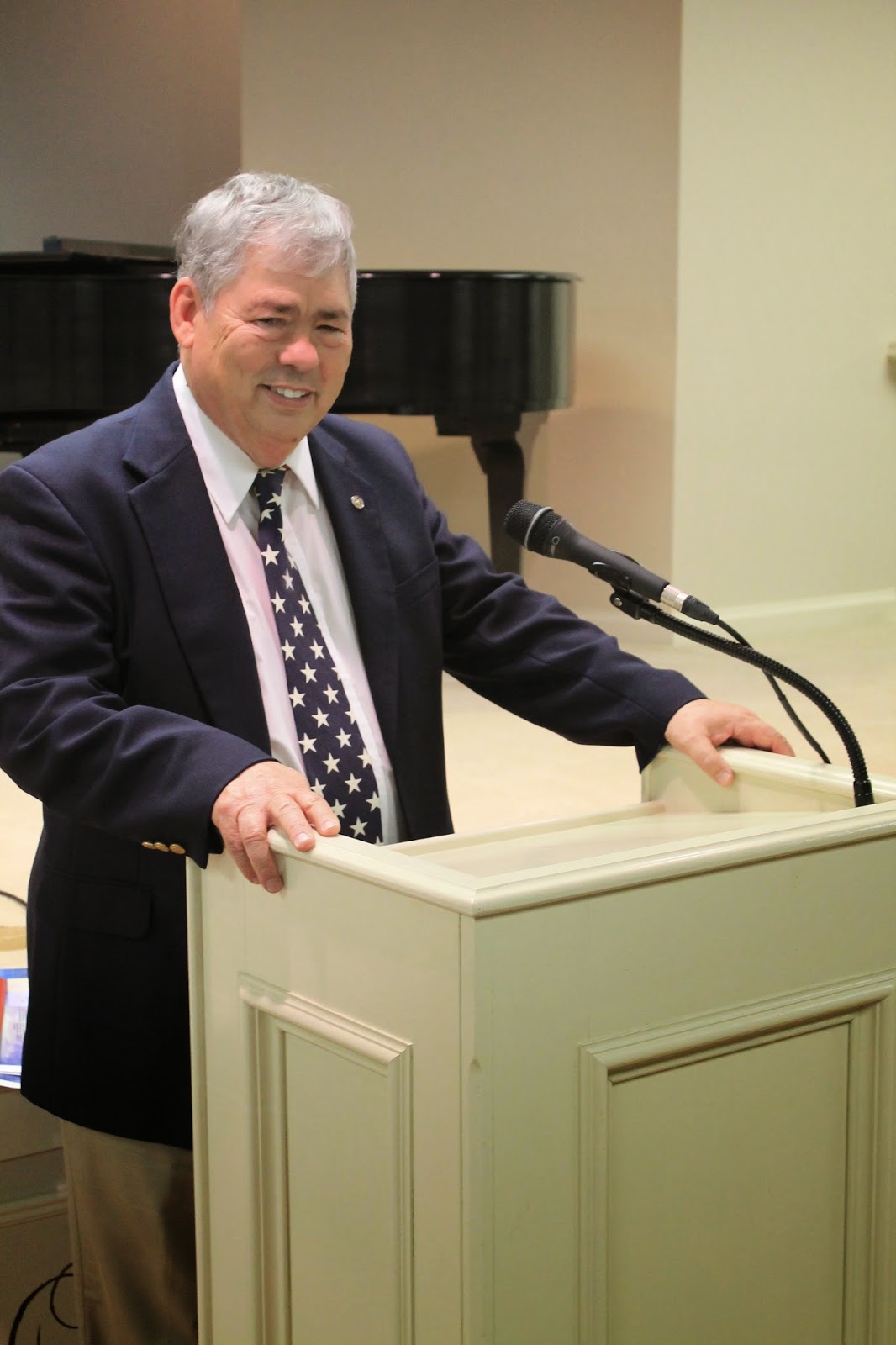 Early in April I had the pleasure of speaking at three events in four days, all related to home and family. On Thursday afternoon, April 9, I was the guest speaker for the  Daughters of American Revolution chapter in Corsicana, my home town. The event was held at the Kinsloe House, long a center for women's clubs and wedding receptions. I was asked to speak about Francis Scott Key and the Star Spangled Banner, which Key penned 200 years ago, during and after the 1814 siege of Fort McHenry. Although the subject had little to do with Texas (I did mention that attorney Key later defended future Texas icon Sam Houston in an 1832 congressional trial), many of the DAR ladies are old friends. I lectured on the War of 1812 for four decades at Panola College, and the DAR ladies - and several husbands who attended - seemed to enjoy the program. Afterward we had a good time reminiscing about the Corsicana of our youth. Refreshments featured a delicious cake which announced "Happy Birthday" - the ladies were aware that I was born in Corsicana on April 8, the day before our meeting. One of my daughters, Dr. Shellie O'Neal, is head of the drama department at Navarro College, which I attended at Corsicana. Shellie was present at the Kinsloe House, and we went to dinner afterward and visited during the evening.


Kerens, in the eastern part of Navarro County, has a fine new library, and for the past three years they have held an Author's Luncheon. I was invited to be the subject of the Fourth Annual Author's Luncheon. I was contacted by Betty Partain, president of the Pioneer Literary Club of Kerens, and by Gayle Steed, President of the Kerens Library Board. I also told them about my scheduled appearance in Corsicana, and they graciously set the Fourth Annual Author's Luncheon for the day following the Corsicana event. A 15-minute drive from Corsicana brought me to the Main Street of Kerens.

The previous three Author Luncheons had been held at the fellowship hall of the historic Presbyterian Church of Kerens. But demand for tickets exceeded the capacity of the church, so the event was moved to the Kerens Alumni Center, a spacious modern building across Main Street from the library. Ticket sales were cut off at 100, and a capacity crowd meant a successful fundraiser for the library. I arrived at 10:30 and set up a book table with a unique table cover fashioned by my wife. We had time for Betty Partain to give me a quick tour of the Presbyterian Church. I also had an opportunity to look at the excellent collection of photos and school memorabilia in the KHS Alumni Center. I had time to greet almost eveyone who attended, and after lunch there was a lively response to my program. I enjoyed excellent book sales, and there were many favorable remarks about Karon's table cover. It was highly pleasing that the State Historian could make a significant contribution to a small-town library event. 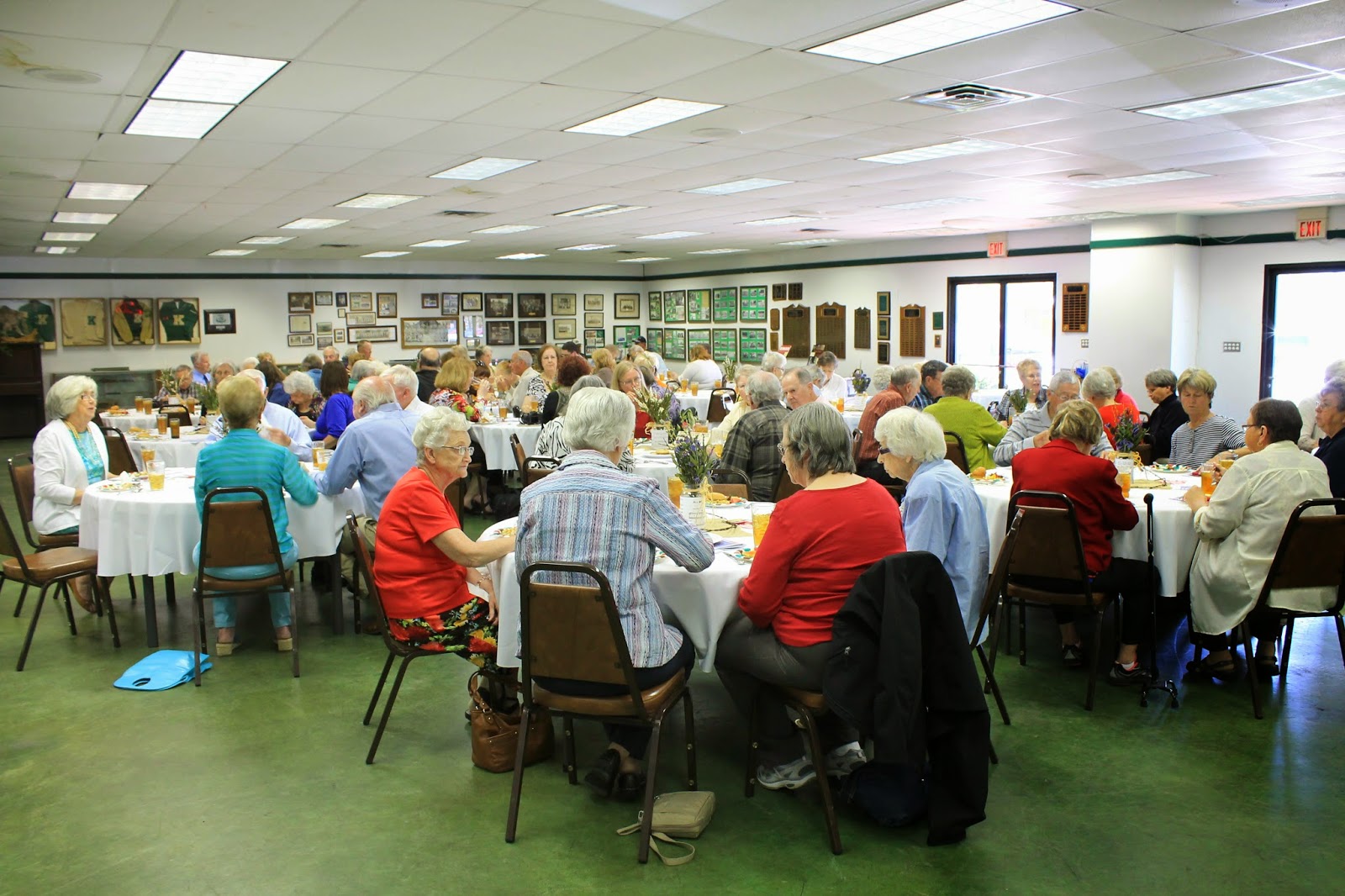 After leaving Kerens I drove hard for Carthage, arriving a couple of hours before I was scheduled to speak at the annual Murphy-Payne Lecture on the Panola College campus. (The Murphy-Payne event was the subject of last week's blog.) The next morning I packed for a trip to the Hill Country. As soon as Karon arrived from the Panola Campus, we drove  westward and stayed overnight at the Stagecoach Inn in Salado. 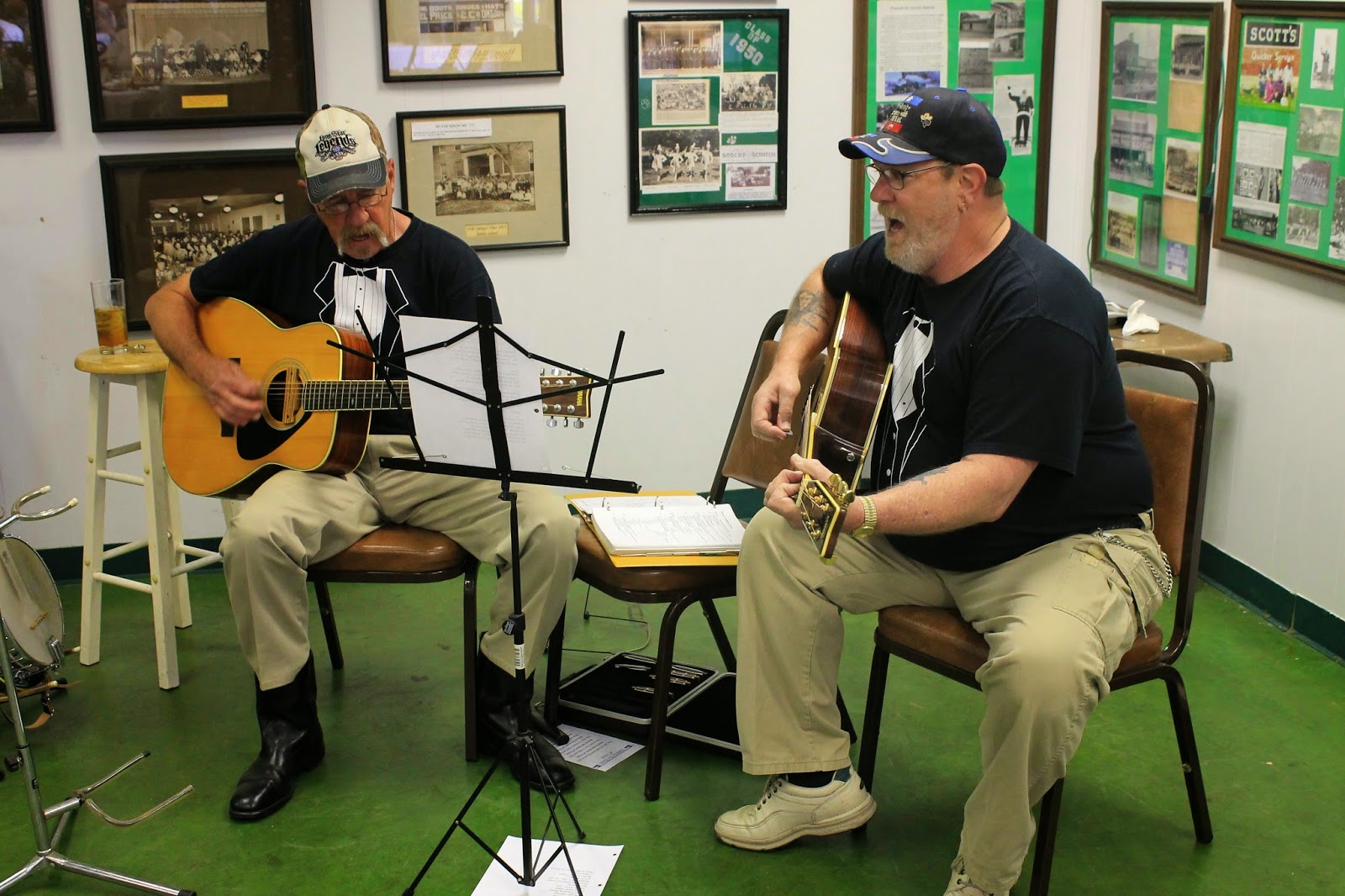 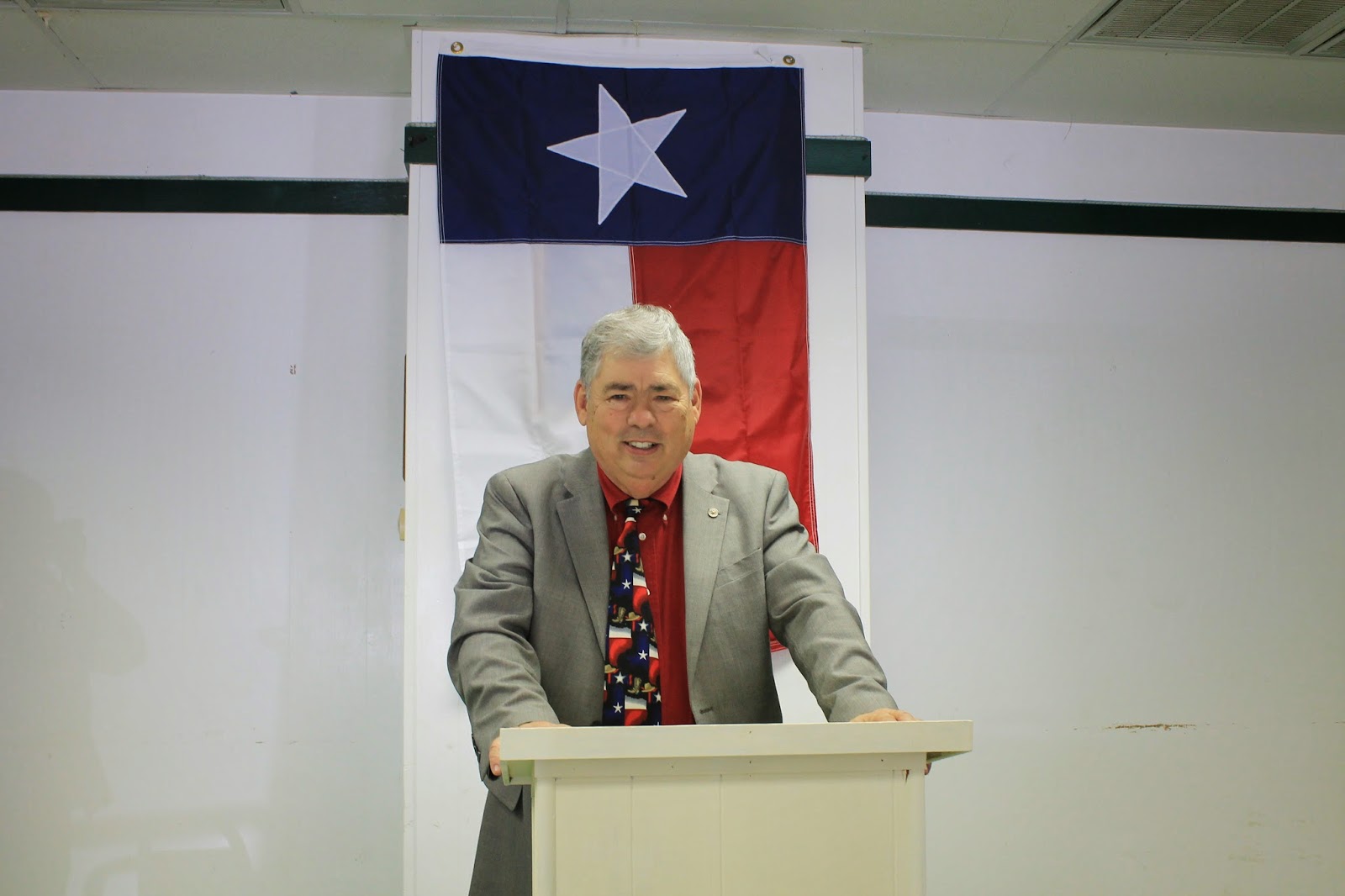 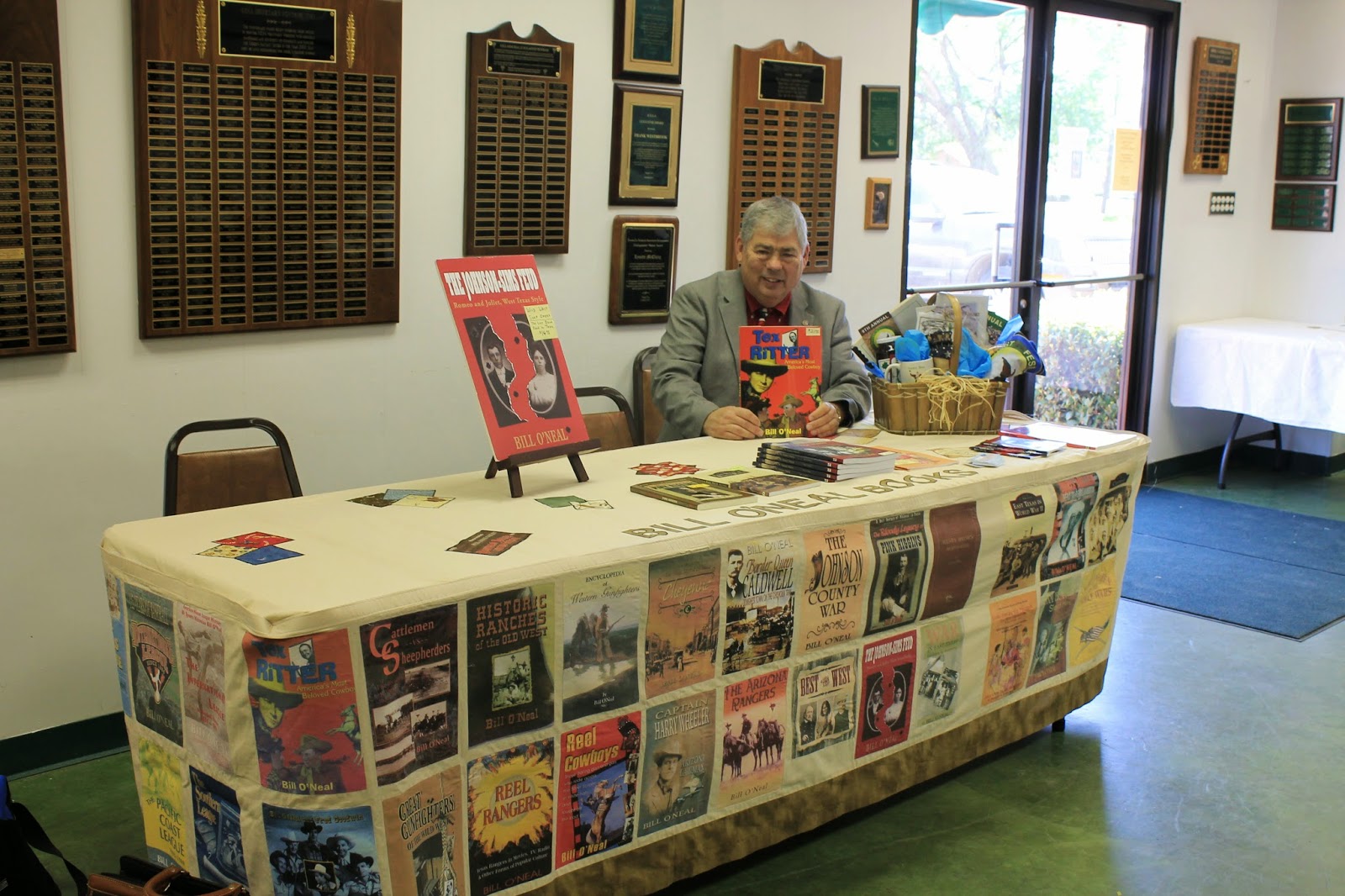 On Saturday morning we drove west into Williamson County. In less than an hour we proceeded through the little town of Andice and arrived at the Bittick Cemetery. Jonathan and Jinsy Bittick were my great-great-grandparents. They migrated to Texas in 1830 with their little growing family and settled on land in what would become Shelby County. Jonathan

was a miller, and he opened a mill on what became known as "Mill Creek." The Bitticks weathered the Texas Revolution and the murderous Regulator-Moderator War of the 1840s. In the 1850s, now in middle age, pioneer restlessness sent them west to Williamson County, where Jonathan opened another mill a short distance west of the cemetery that would bear his name. We paid our respects to the graves, which are decorated with medallions that declare them citizens of the Republic of Texas. 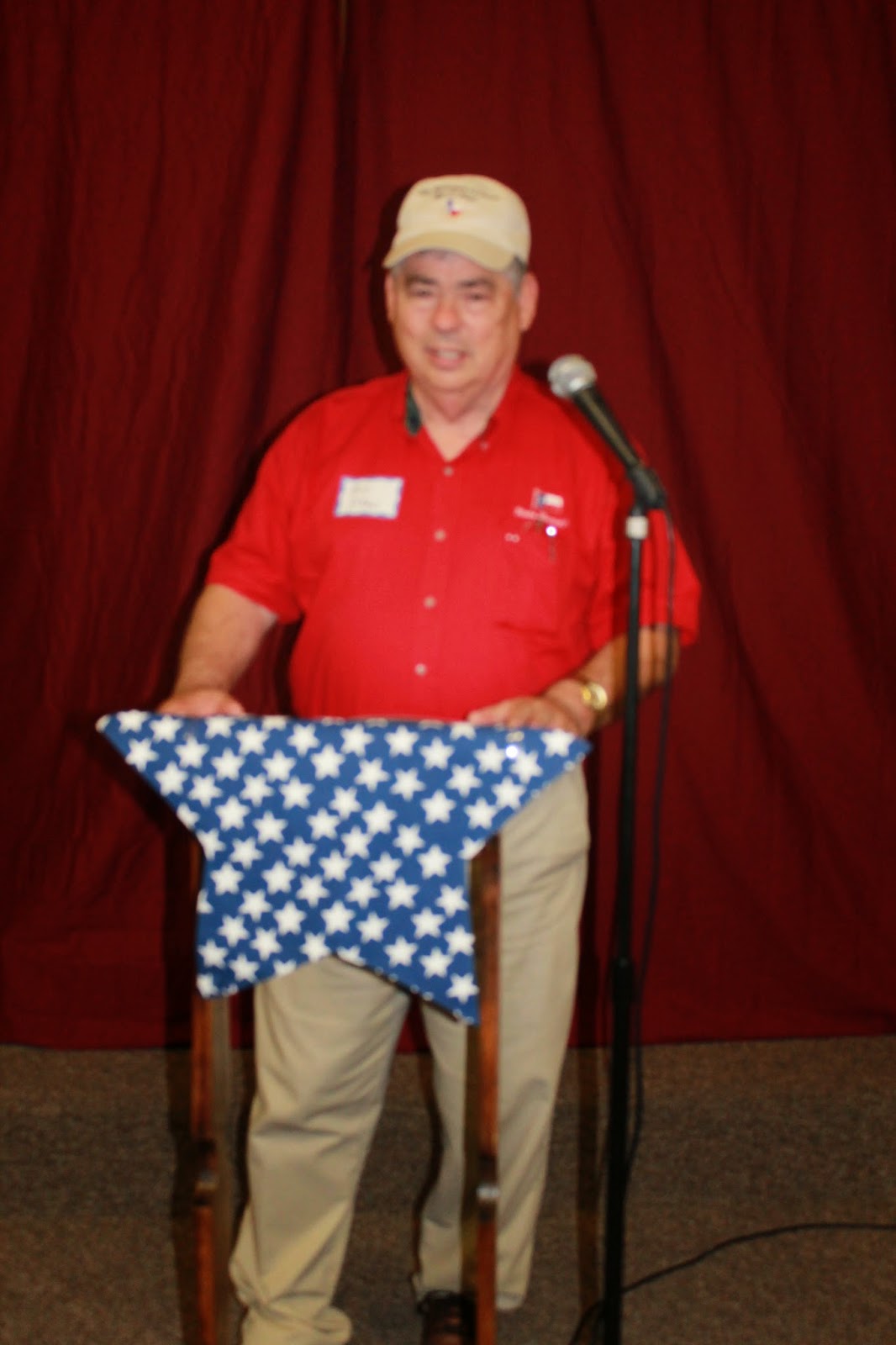 Karon and I drove back to Andice to a church where "The Bittick Family Association" holds its annual meeting. I had been invited to be the keynote speaker for the 2014 Bittick Family Association Meeting by Pam Baker, who is in charge of arrangements.  We arrived at the meeting late on Saturday morning. My sister and brother-in-law, Judy and John Smith, already were there, and so was Pam Baker and association president Johnny Bittick. There were tables full of genealogical charts and photo scrapbooks, along with copy machines. Following a catered lunch, I spoke about the office of State Historian and the Bitticks in Shelby County. Later in the afternoon the group would visit the Bittick Cemetery, but Karon and I started our five-hour drive for our home in Carthage. During the drive we spoke of how impressed we were with the Bittick Family Association. 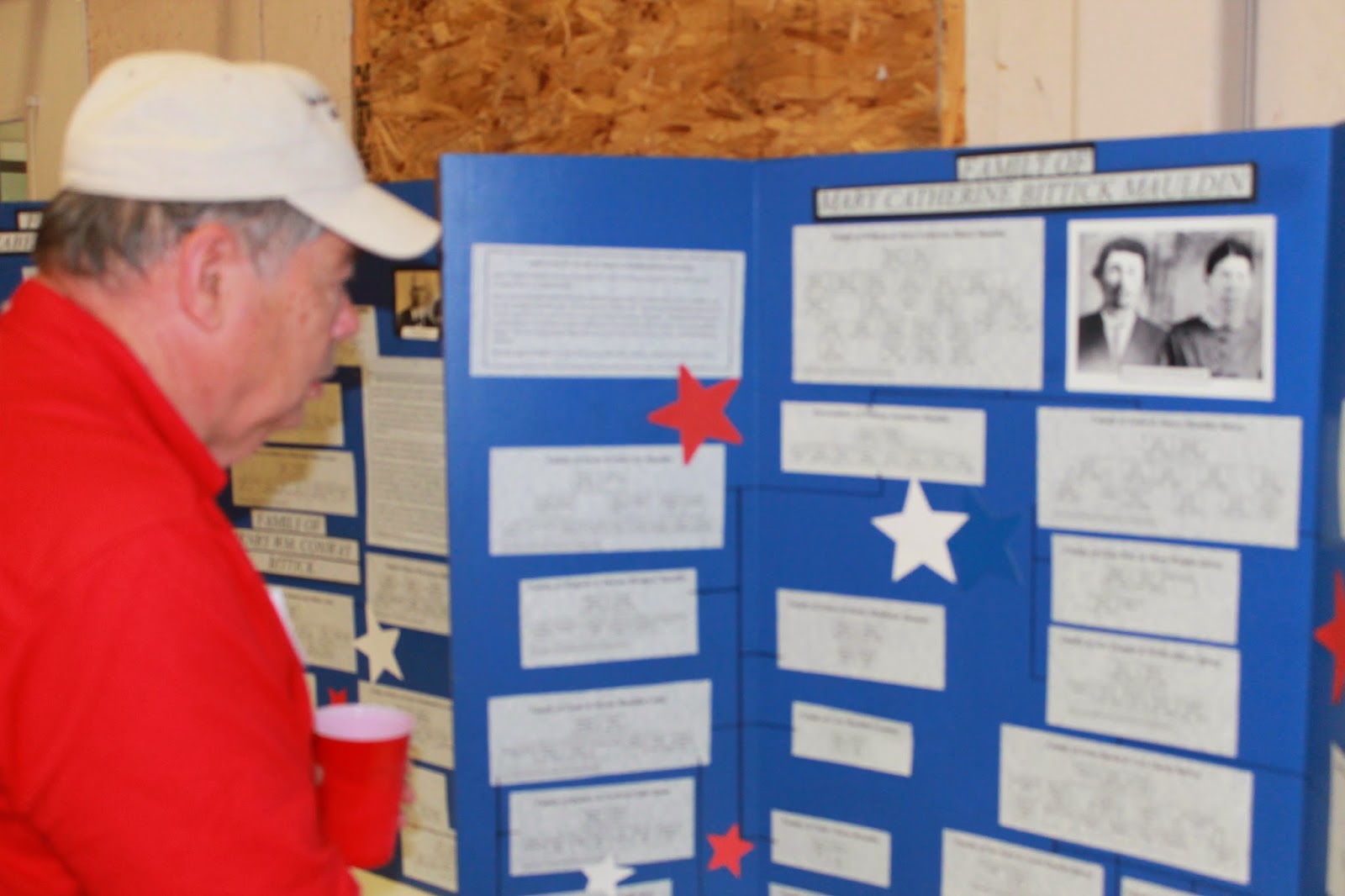