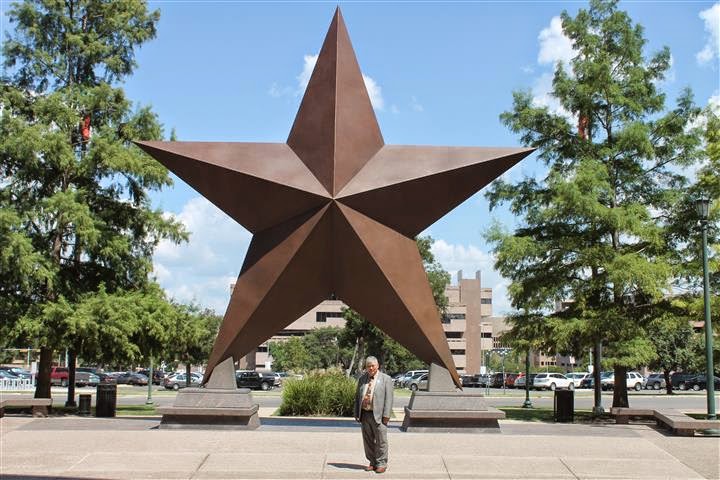 Members of the West Texas Historical Association enjoyed an outstanding meeting in Amarillo, the 92nd Annual Conference. The official meeting dates were Friday and Saturday, April 10 and 11. But Robert Hall, a master organizer of historical field trips, set up attractive journeys both before and after the official events. Indeed, on Wednesday afternoon Robert led a “Mini Tour” that included the Panhandle-Plains Museum and spectacular Palo Duro Canyon. On Thursday morning Robert and 35 “early birds” boarded a bus for a day-long journey. Thursday’s adventures began at the Alibates Flint Quarry National Monument, followed by the Hutchinson Country Museum, the Square Horse Museum in the town of Panhandle, and – highlight of a superb day – the site of the 1874 Battle of Adobe Walls, located on private property but arranged by the indefatigable Robert Hall.

On Thursday evening there was a lively reception at the Staybridge Inn and Suites, after which a large crowd assembled at Youngblood’s Café for what has become a traditional “Early Bird Dinner.” More than 100 of us enjoyed a delicious supper, the first of a series of fine meals catered for us by Youngblood’s. Lynn Hopkins of the Hutchinson County Museum showed us the brief but historic black and white film, “The 1941 Native American Return to Adobe Walls to Honor Fallen Braves.” Afterward, as current president of the WTHA, I conducted a meeting of our board.

On Friday morning we gathered at Dutton Hall on the campus of Amarillo College. Dr. Paul Matney, an Amarillo native who recently retired after 35 years at Amarillo College as faculty member, administrator, and president, made arrangements for us to hold Friday and Saturday sessions on campus, along with Friday’s Women’s History Luncheon and Saturday’s Awards and Business Lunch. Dr. Matney extended a formal welcome to us, and he was present throughout Friday and Saturday, attentive to any need we might have.

In the same manner, Dr. and Mrs. Garry Nall of Amarillo were co-chairs of the Local Arrangements Committee. Gary is an Emeritus Professor of History at West Texas A&M University, and a Lifetime Board Member of the WTHA. His charming and gracious wife, Annette, is a consummate hostess. Annette was at every event, working quietly but constantly for the convenience of everyone. Many people noticed and thanked Annette for her many courtesies. She responded to me with a smile and typical grace: “If people have a wonderful time at a party or event, it’s because the people who attend are wonderful!”


On Friday evening we gathered at the historic Bivins House, a massive 1905 mansion erected by rancher, oil man, and Amarillo mayor Lee Bivins. The reception honoring the WTHA president featured excellent food and self-guided tours of this impressive old home. We next moved three blocks to the dining hall of the Polk Street Methodist Church (home church of Annette and Garry Nall). It was my pleasure to introduce our after-dinner speaker, retired lawyer and district attorney Bill Neal. Since Bill’s retirement from his legal career, he has authored five books on the flamboyant lawyers and colorful trials of the Texas frontier. A delightful public speaker, Bill regaled us on the topic, “Courtroom Gladiators of Yesteryear: Tales of Those Audacious Frontier Lawyers.” The last event of the evening was the announcement of a support connection by the WTHA with the Quanah Parker Trail Project. This 52-county historical project about Comanche sites may be explored on their website. Numerous QPT representatives, including descendants of Quanah Parker, were present and were appreciative.


Saturday morning began with one of the highlights of the 2015 meeting. Everyone assembled in the original auditorium of Amarillo College, in Ordway Hall, for a session entitled: “A Prof’s Prof: A Timely Tribute to Paul Howard Carlson and His Versatile Body of Work.” Dr. Carlson is a retired professor from Texas Tech, a master teacher and a prolific author who long has been a mainstay of the WTHA. His former colleague, David Murrah, chaired the session, and former students of Carlson presented programs: Susan Dickey, “Paul Carlson: The Young Teacher and Military Historian”; Leland Turner, “Paul Carlson: Ranching Historian”; Scott Sosebee, “Paul Carlson: Native American Historian”; and Monte Monroe, “Paul Carlson: Editor and Mentor.” These presentations featured personal anecdotes, and Paul delivered an emotional response.


Our final official event was the Saturday Awards and Business Lunch. The Rupert Norvel Richardson Award for the Best Book in West Texas History was presented to Alvin Lynn of Amarillo for Kit Carson and the First Battle of Adobe Walls, published by Texas Tech University Press. We welcomed three new WTHA Fellows – Suzanne Campbell of San Angelo, Sylvia Mahoney of Fort Worth, and Travis Roberts of Marathon.

Our new president, Dr. Diana Hinton, provided me with a gracious introduction, and my presidential address was entitled. “West Texas: Laboratory and Playground for Historians.” Afterward, President Hinton announced next year’s annual meeting: April 8 and 9 in Abilene.
Shortly after we adjourned, Robert Hall began a final field trip, scheduled to conclude at the restored Charles Goodnight House and Visitor Center in the little community named for the legendary cattleman. But Robert already is planning 2016 field trips around Abilene, starting with a tour of frontier forts. Come and join us next April!

For more information:  http://swco.ttu.edu/WestTexas/
http://www.quanahparkertrail.com/
Posted by Unknown at 8:49 PM